Calcutta stares at rise in pollution levels due to green cover loss: Environmentalists

Many trees were uprooted due to cylcone Amphan 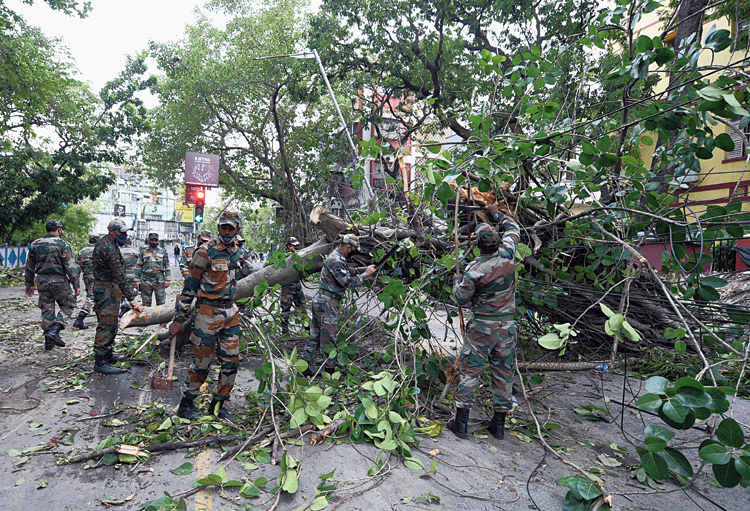 Army personnel cutting and removing trees on Ballygunge Circular Road in Calcutta on Saturday. The Kolkata Municipal Corporation (KMC) has said that over 5,000 trees, several of which are over 50 years old, have been uprooted. Environmentalists, however, have put the number at 10,000.
Picture by Gautam Bose
PTI   |   Calcutta   |   Published 24.05.20, 05:04 AM

Calcutta is staring at a rise in pollution levels post-lockdown due to uprooting of thousands of trees in the city by cyclone Amphan, environmentalists said.

The Kolkata Municipal Corporation (KMC) has said that over 5,000 trees, several of which are over 50 years old, have been uprooted. Environmentalists, however, have put the number at 10,000.

The trees, which absorb carbon emissions, had played a significant role in improving the air quality in the city during the lockdown.

'More than a third of the roadside trees in the city seem to have been wiped out. We foresee a serious rise in PM 2.5 levels from the first week of September, when an estimated eight lakh vehicles will hit the roads post-lockdown,' environmentalist Somendra Nath Ghosh said.

An official of the West Bengal Pollution Control Board said that trees will have to be planted on a large scale during the coming monsoon season.

'We will launch a plantation drive once things settle down. Chief Minister Mamata Banerjee has also called for plantation of trees to restore the green cover,' member of KMC's board of administrators and former mayor-in-council (Parks), Debashis Kumar said.

But first, the uprooted trees have to be removed on an urgent basis and the job is being done on a war footing, he said.

'Ten trees will need to be planted to compensate for the loss of one fully-grown tree. This is the standard practice,' he said.

KMDA, custodian of the Rabindra Sarobar Lake, will replant at least 100 of the fallen trees, he said.

Many other trees in the botanical garden have been uprooted, an official of the establishment said.

'We are yet to assess the total damages. We will see which trees can be replanted and where planting saplings of the same species will be required,' he added.