PM exits video screen immediately after his speech; varsity registrar cites ‘technical reasons’ for stalling the opening of the facility 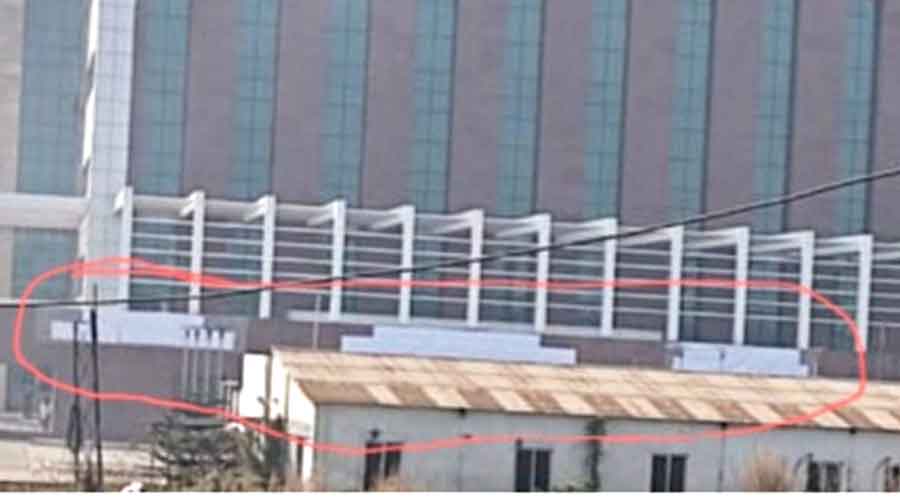 Dr BC Roy Institute of Medical Sciences and Research at IIT Kharagpur that was to be named after Syama Prasad Mookerjee
Telegraph picture
Subhankar Chowdhury   |   Kharagpur   |   Published 24.02.21, 01:49 AM

IIT Kharagpur held its 66th convocation on Tuesday and there was no announcement of the inauguration of the Dr Syama Prasad Mookerjee Institute of Medical Sciences and Research.

Instead, the director of the institute prefaced his speech with a tribute to Dr B.C. Roy, the revered medical doctor and Bengal’s first chief minister, after whom the institute of medical sciences was initially named.

“We have entered into the 70th year of existence and are heading towards the 75th year. Here we must not forget the great visionary, our Dr B.C. Roy, who had thought of such an eminent institute, first time in the country 70 years back,” director V.K. Tewari said.

On February 13, Tewari had made a Facebook post on the upcoming convocation: “The Prime Minister will also inaugurate (virtually) Dr Syama Prasad Mookerjee Institute of Medical Sciences and Research, IIT Kharagpur”.

Asked why the hospital was not inaugurated, IIT Kharagpur registrar Tamal Nath told Metro: “The inauguration has been deferred following some technical reasons”.

Asked whether the Dr Syama Prasad Mookerjee Institute of Medical Sciences and Research would be inaugurated on a later date, he said: “At this moment we can only say that the inauguration has been deferred.”

Nath had said last week the institute’s board of governors had approved the renaming.

Repeated calls to the director went unanswered. He did not respond to text messages either.

Sources on the campus said the inauguration plaque — on which “Dr Syama Prasad Mookerjee Institute of Medical Sciences and Research” was written in Hindi, Bengali, Sanskrit and English — was wrapped in a white piece of cloth on Monday night.

The super-speciality hospital has come up on an 18-acre plot at Balarampur, just outside the IIT campus. The IIT has set up the hospital as part of its plan to open a medical college.

Teachers on the campus said they had got the impression the plan to inaugurate the hospital had been shelved for the time being after several alumni publicly questioned the decision to rename the hospital after someone who had nothing to do with the institute or the medical science.

On Tuesday, the Prime Minister gave his convocation address that lasted for about 20 minutes, focusing on issues like “Make in India”. He exited the video screen immediately after his speech.

According to the initial plan, Modi was to inaugurate the hospital after delivering the convocation address.

The director and other officials were on the dais.

This newspaper reported the renaming effort on February 15. The alumni, upset with the decision, expressed outrage by posting comments on the Facebook page of director Tewari.

One of the signatories of the letter, Ajay Kumar Roy, a former head of the school of medical science and research at IIT Kharagpur, said on Tuesday: “We are happy to know that the Prime Minister did not inaugurate the hospital. We hope that the super-specialty hospital will continue to be known as Dr B.C. Roy Institute of Medical Sciences and Research. It was named after B.C. Roy because of his contributions to the field of medical science.”

B.C. Roy’s name had been proposed by Roy and former President A.P.J. Abdul Kalam had laid the foundation stone for the facility in May 2007.

On Tuesday, even as the convocation proceedings were being beamed on YouTube, someone who was watching the proceedings wrote in the comment section: “RP Hall hai kya? (Is the RP hall still in existence)?”

Another person wrote: “Azad ka naam b na change kr de ye log. (These people can even change the name of Azad hall).”

As many as 2,815 students were awarded degrees on Tuesday. Of them, 75 students were invited to receive the gold and silver medals conferred by the IIT.