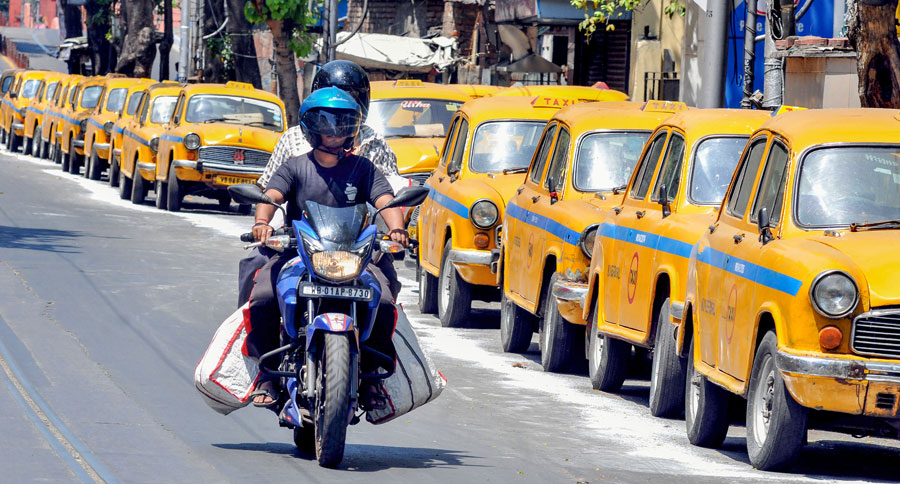 A biker rides past taxies parked along a road during the nationwide lockdown in wake of deadly coronavirus outbreak, in Calcutta on Monday
(PTI)
Subhajoy Roy   |   Calcutta   |   Published 30.03.20, 08:30 PM

Apollo Gleneagles Hospitals, Oyo, Lemon Tree and Zomato have come together to create 100 hotel rooms in Calcutta by next week where people can stay in isolation if they need to, officials of the companies said on Monday.

The rooms are meant for those who need to stay in isolation to stop spread of the novel coronavirus but cannot do so at home because of paucity of space, the officials said.

While Apollo will provide telemedicine facilities, Lemon Tree (a chain of hotels) and Oyo (online hotel aggregator) will arrange the rooms. Zomato (a food delivery platform) will deliver meals.

Doctors will stay in touch with the quarantined people and shift them to hospitals if they show symptoms Covid-19 or test positive for the virus.

Doctors of Apollo hospitals will be available to those in hotel quarantine over the phone. Telephonic consultation with the doctors will be free but the medicines they prescribe will be charged.

“We will start with 100 rooms in Calcutta next week. We launched the project in six other cities of India on Monday. Our plan is to scale up the number of rooms by 50 to 100 every week in the country,” said Sangita Reddy, the joint managing director of Apollo Hospitals Enterprise Limited.

An official of Apollo Hospitals said finer details of how many rooms would be available in how many properties were yet to be finalised. “Once everything is final, we will upload the details on the website askapollo.com or people can also call the number 1860-500-0202 and get the details,” Reddy said.

Details of how to book the rooms or who to connect will also be available on the mobile app “Apollo 247”.

The six other cities where the project has been launched are Delhi, Mumbai, Chennai, Hyderabad, Bangalore and Faridabad.

The arrangements are being made as part of the “Project Stay I” initiative launched by the hospital and other partners.

Earlier, the Bengal health department had listed 31 hotels in and around the city where people could stay in self-quarantine for a fee. The state government had announced that the list of hotels could be expanded and any hotel with the required infrastructure was welcome to apply to be enlisted.

The state government is also planning a similar initiative in the districts. Chief minister Mamata Banerjee asked district officials during a video conference on Monday to make pay-and-use quarantine facilities. “People who can afford to pay should pay and stay if they want,” Mamata said.

Reddy said Apollo hospitals across the country were flooded with requests from concerned people who wanted to stay in hospital quarantine after arriving from abroad or for other reasons. But many of them do not need to be in hospital. She said many of these people lived in large families where more than two persons shared a room.

“These people do not have the scope to stay in home quarantine, but they have to remain quarantined. If they are kept in hospitals, it will block crucial hospital beds that would be needed by people whose health condition merits hospitalisation,” Reddy said during a virtual news conference on Monday.

It was such a situation that triggered the plan to create hotel rooms for quarantine.

While Oyo has several properties in the city, Lemon Tree has only one property in New Town.

It was not immediately clear if part of the New Town property would be used for the quarantine facility.

Ginger Hotels is a part of the project in some cities. Deutsche Bank, Hindustan Unilever Limited and the State Bank of India are the other partners of the project.