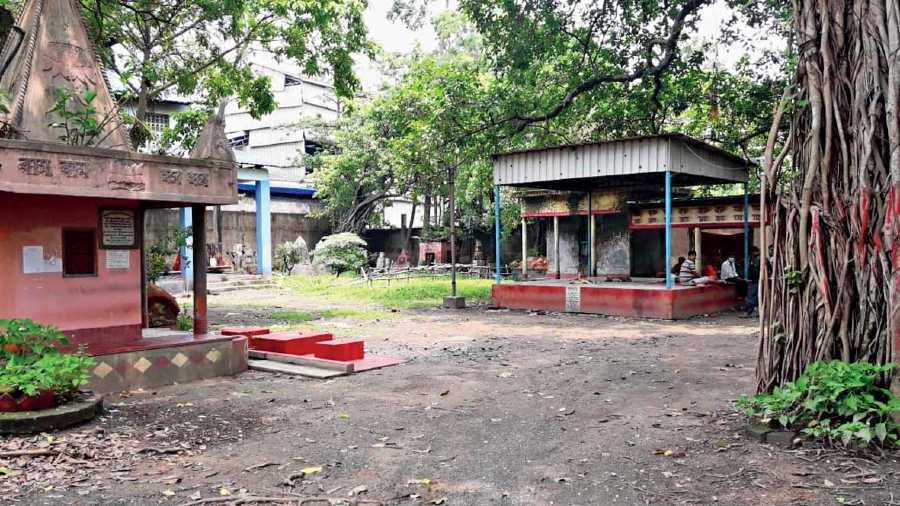 The shedded platform to the right is where wooden pyres are lit at Hazratala burning ghat in Rajarhat
Sourced by the correspondent
Sudeshna Banerjee   |   Salt Lake   |   Published 25.06.21, 06:49 AM

The Housing and Infrastructure Development Corporation (Hidco) has set its sights on the Hazratala burning ghat in Rajarhat to build an electric crematorium.

An expression of interest was invited on Monday by the authorities from architects for the preparation of a detailed project report for the construction of the crematorium.

The burning ghat, which is the only facility in the vicinity of the Bidhannagar Municipal Corporation and New Town Kolkata Development Authority (NKDA) area, as reported in The Telegraph Salt Lake cover story on June 4 titled ‘Final journey in a Covid world’, is an archaic one using wooden pyres. The area is under the Rajarhat Bishnupur gram panchayat and is 4km from Derozio College and a kilometre from Rajarhat Chowmatha towards Berachampa.

Hidco officials have paid several visits to the spot. Though the area is outside NKDA area, Hidco can undertake projects anywhere across the state. “The facility is on community land and is run by a committee,” said an official.

With the state government directing every municipal authority to build a cremation facility in its area after the Covid second wave caused a spike in deaths, Hidco was planning to build a crematory and a mortuary behind Chittaranjan National Cancer Institute in Action Area 1D. That led to protests from residents of the neighbourhood.

While four furnaces had been planned in the 2.5 acre land that had been earmarked for the project in New Town, the Hazratala burning ghat site is not as big. “It is spread over 1.5acres. So we will have space for only two furnaces. A mortuary will be there as will a meditation hall but everything will have to be scaled down as the space is less,” the Hidco official said.

The burning ghat, which gets its name from adjoining Hazra Babar than where a Shiva temple was later built (not the one with the same name in Chak Pachuria, opposite Uniworld City), has been in use since the 1950s when boats would bring wooden logs for the pyres down the Noai canal, by which it is located.

“A part of the burning ghat is vested land while the rest were donated by a few influential residents of the area. We had been petitioning since 2011 for its modernisation. Though we have received some funds from the earlier MLAs which were used to build a concrete platform with a shed as also toilets, it is becoming difficult to maintain such a spacious ground,” Prasanta Roy, secretary of the Hazratola Smashan Samiti, told The Telegraph Salt Lake.

The Covid situation put enormous stress on it as it did on every cremation ground in the city. “In April-May, over 100 bodies came here, with even six-seven bodies sometimes on a single day from even Bhangor to Kestopur. Population of Rajarhat has increased manifold with New Town coming up. Not just pollution, it is a horrendous experience to witness burning on a wooden pyre. It is time-consuming also, requiring close to three hours per body. An electric crematory will be a far more hygienic and convenient option,” Roy points out.

As for the New Town crematory project, the DPR, submitted to the government, continues to remain under its consideration for approval. “Meanwhile, we want to go ahead with the second project,” the official said.

Write to us at saltlake@abp.in