Each of them got 10kg of rice and 2kg of daal 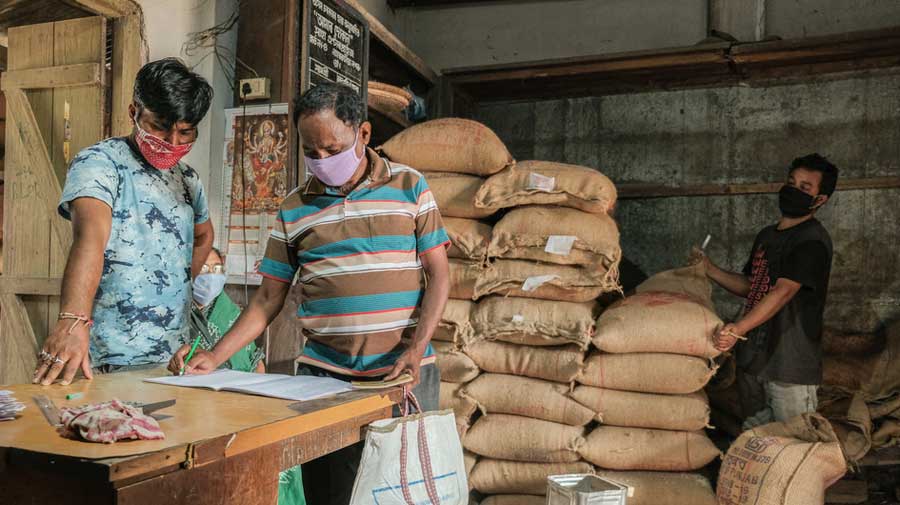 One thousand sex workers at Sonagachhi got free ration from an NGO on Sunday.

The Covid pandemic has posed a huge livelihood challenge for these women. Since March, the pandemic-induced lockdown had put most of the women out of work.

The business is making a comeback but slowly and many women are still reeling under acute financial stress.

On Sunday morning, volunteers of the Anti-Hunger Squad Foundation reached Sonagachhi on two mini-trucks loaded with dry ration. Each of the 1,000 women got 10kg of rice and 2kg of daal.

“Many of the rooms in the buildings are locked. Many women have left the place because they could not continue paying the rent,” said Zeeshan Majid, the founder of the NGO.

The foundation has been providing food to relatives of patients at government hospitals for two years. In the wake of the pandemic, the operations were scaled up and since March, the foundation has reached out to tens of thousands of people with free food.

Sunday’s drive was conducted in coordination with the local police.

Post-lockdown, with things gradually opening up, people are back to work. The food distribution drives across the city have come down. But many people are still struggling to make ends meet.

Sonagachhi, Asia’s largest red-light district, was home to over 7,000 sex workers before the pandemic. Women from across India, and some from Bangladesh and Nepal, worked at brothels in Sonagachhi.

A recent survey conducted by another NGO — Anti Human Trafficking Organisation — revealed that over 70 per cent of the sex workers wanted to leave the trade to look for new avenues of income.

But most of them could not do so because of unpaid loans, taken from money lenders, brothel owners and pimps.