Cyclone Yaas: Torrential downpour in Calcutta on day after storm 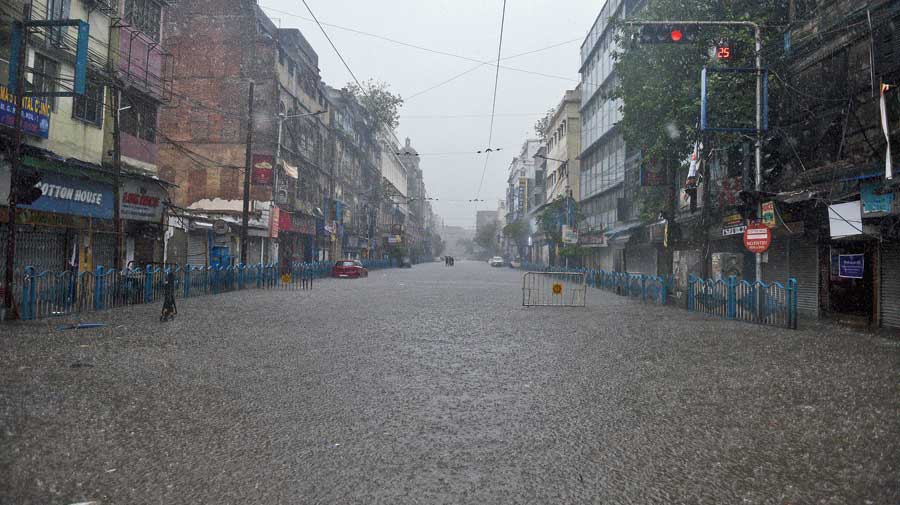 ⚫ Volume of rain on day of cyclone: 25mm

A giant thundercloud that had drifted away from the remains of Cyclone Yaas and reached the skies over Calcutta unleashed torrential rain in the city on Thursday.

Many areas were waterlogged, prompting precautionary power cuts by the CESC.

Met officials attributed the downpours to a 200km-long cumulonimbus over South and North 24-Parganas, Calcutta, Howrah and Hooghly. They predicted possible thunderclouds over Calcutta on Friday too.

The rain caught the city off guard. Calcuttans who had braced for heavy rain on Wednesday and were relieved when the cyclone spared the city woke up on Thursday to claps of thunder, gusty winds and sharp spells of rain. The sun had come out briefly in the morning but the sky soon turned dark.

Jinjira Bazaar on the city’s western fringes and Behala in the southwest received 159mm and 150mm of rain, respectively, between 6am and 4pm, a Calcutta Municipal Corporation official said citing information from the pumping stations.

Around 1.30pm, the showers were so intense in Behala that visibility was blurred beyond 10 metres. Around 2pm, Camac Street was under water, as were parts of Central Avenue, Mahatma Gandhi Road and College Street.

Maniktala, Belgachhia, Thanthania and Mominpore too recorded more than 100mm of rain, the civic body said.

“During landfall by a cyclone, the cloud mass is compact. But as the system weakens over land, the clouds get scattered — they spread out,” said India Meteorological Department chief Mrutyunjoy Mohapatra.

“Calcutta and the rest of Bengal were not the only places to receive rain on Thursday. The clouds spread to places like Assam and Meghalaya to the east and Uttar Pradesh to the west.”

On Thursday evening, the system that was Cyclone Yaas was a depression over central Jharkhand, 20km from Ranchi. It was tipped to weaken further on Friday into a low-pressure area and move towards Bihar.

“Another factor that led to the rainfall (in Calcutta) was the continuous flow of moisture-laden winds from the Bay,” Mohapatra said.

A cyclone is like a magnet that pulls winds from all sides. Winds from Calcutta’s east flew across the city towards Odisha on Wednesday because the system was crossing the state.

On Thursday, the system was over Jharkhand as a depression but it still attracted winds from all sides. Among these were winds from the Bay of Bengal that passed through Calcutta.

“The uninterrupted supply of moisture also contributed to the rain,” Mohapatra said.

A cyclone usually sucks all the moisture out of the air and leaves a trail of dry weather. Amphan had triggered close to 250mm rain in Calcutta but the days that followed were hot and dry, made worse by power outages and the lack of water.

“The system (that was Yaas) will weaken further by Friday but will still attract some moisture from the Bay, which means thunderclouds can form over Calcutta on Friday as well,” the Met official said.

But towards the latter half of the weekend, the weather will be hot and dry, he said.

The daily maximum temperature, which fell to 30 degrees on Wednesday and was 31.5 degrees on Thursday — several notches below the usual 35-36 degrees for end-May — is likely to soar towards 35 degrees by Sunday, the Met official added.