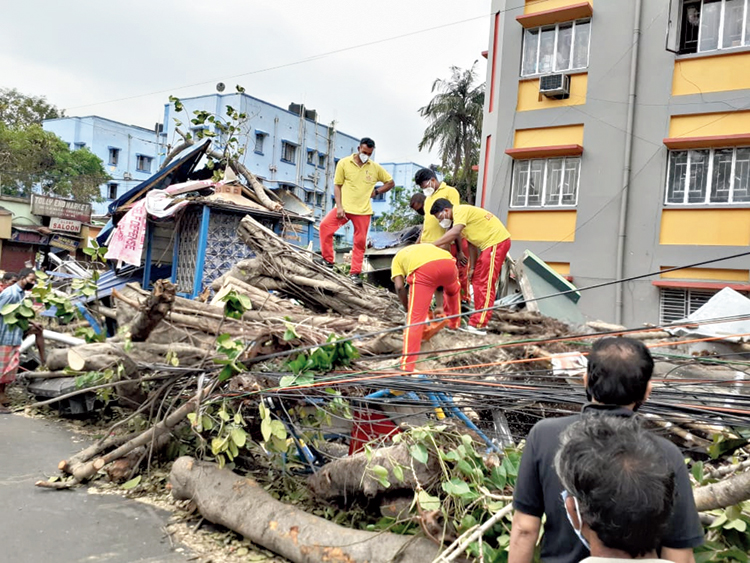 Firefighters will not chop any big tree entangled with wires unless power utility linemen physically verify and confirm that supply has been cut off, the state fire department said on Thursday.

The move came a day after a 27-year-old fireman got electrocuted while trying to chop a tree that had fallen on an electric pole in Howrah’s Belur.

“The electricity agency people will physically verify the line with the help of electric instruments and on being satisfied only then further action will be taken by our people,” JagMohan, director-general (fire and emergency services), told Metro on Thursday.

Fire officers, Calcutta Municipal Corporation officials and cops often have to engage themselves in cutting and removing trees after every storm or natural calamity. City police officers said

Police personnel of the disaster management group have been asked to be “more cautious” after the Howrah accident, city police officers said.

Several firemen Metro spoke to shared their apprehension on risking their lives while clearing and cutting trees after every natural calamity.

One of them said the fear of being electrocuted was relatively less when they were involved in cutting small trees. But the problem starts with big trees after a cyclone or heavy rain, he said.

On Wednesday, after the fireman got electrocuted, people in the locality at Belur had forced a CESC technician to climb the same ladder and check if the wire entangled with the tree was live.

“He (the CESC technician) was shaking… if he was not sure himself how could he have given the clearance earlier that the power supply had been switched off?” a colleague of the dead fireman said.

In Howrah division, firefighters have chopped 60-65 trees in the aftermath of Cyclone Amphan, an officer said.

All fire stations in Howrah have been told to wait till someone from the electric utility checks physically that power supply has been switched off before cutting a tree, a fire officer in Howrah said.

It has been emphasised that metal ladders of the department should never be used, the officer said. Instead, wooden ladders of the electric supply company should be used.

Allegations have surfaced that fireman Sukanta Singha Roy had climbed a ladder with a saw in hand to cut a tree after his team got the clearance from CESC technicians that power supply in the high-tension wires entangled with the tree had been snapped.

Chief minister Mamata Banerjee has said such a “misinformation from CESC” was a “criminal offence” and asked the police to take strict action.

The Fire department has filed a criminal complaint against CESC, based on which the police in Howrah arrested three CESC technicians late on Wednesday. They have been booked for causing death by negligence (Section 304A of the Indian Penal Code).

A police officer said the three technicians had admitted to negligence in the matter.

They have been remanded in judicial custody for a day. The court has asked the investigating officer to be present with the “case dairy” on Friday.

On Thursday, CESC sent a message to its subscribers asking them to “avoid going in close proximity of any electrical pole or distribution pillar box during rain or waterlogging.