Covid: Calcutta comorbidity survey extended to include all

The Telegraph had on Monday reported that close to 385,000 households of an estimated 1 million in the city were still to be covered 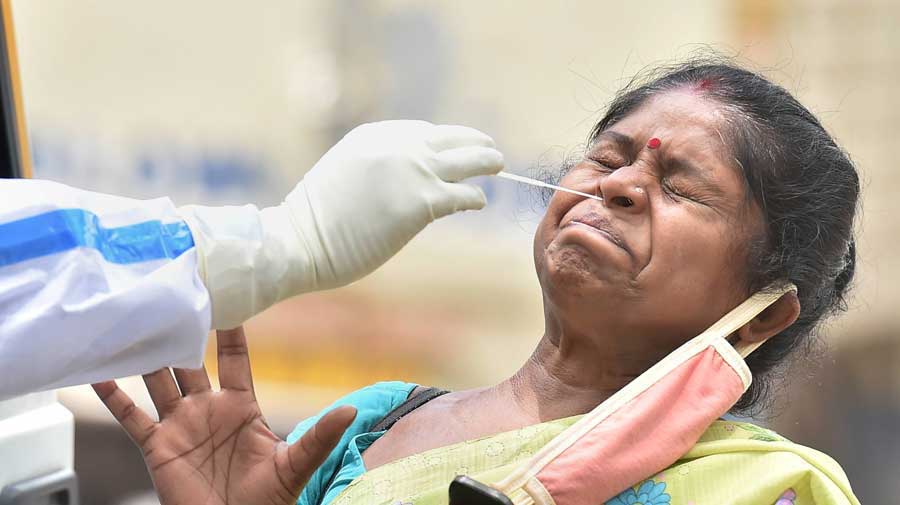 A health worker collects a a woman's swab sample for a Covid-19 test in Calcutta. Comorbidity can affect the workings of vital organs and a new infection can spell more trouble for a person suffering from one or more such diseases, according to health experts.
Shutterstock
Subhajoy Roy   |   Calcutta   |   Published 22.09.20, 12:41 AM

The comorbidity survey that ended on Sunday has been extended for a few more days to ensure all households in the city are covered, Firhad Hakim, the chairperson of the Calcutta Municipal Corporation’s board of administrators, said on Monday.

Metro had on Monday reported that close to 385,000 households of an estimated 1 million households in the city were still to be covered. The government is planning a mop-up exercise to ensure no household is left out of the survey, a state government official had said on Sunday.

“We have extended the survey’s duration. The survey will not end till all households are covered. It seems it will take another fortnight to complete the survey,” Hakim said on Monday. “We have already covered a large number of households. No one will be left out of the survey after a few more days.”

The survey began on September 7 with a 14-day deadline to cover an estimated 1 million households in the city to prepare a list of people who suffer from diabetes, chronic kidney and lung diseases, hypertension and cancer among other diseases.

The CMC, the state health department and the Covid Care Network, an organisation of doctors, health officials and people who have recovered from Covid were part of the surveying team.

The CMC had planned to deploy 20 surveyors and two supervisors in each ward. But one of the main reasons why all households could not be surveyed was the shortage of the desired number of surveyors, the CMC official said on Monday.

In many wards, the CMC did not get the full strength of surveyors, he said. In some large wards, the number of households was “unusually high” and the available number of workers could not visit all households.

Comorbidity can affect the workings of vital organs and a new infection can spell more trouble for a person suffering from one or more such diseases, according to health experts.

The civic body will upload the data on its server and the information will be accessible to its doctors.

This is the first time a survey of all households in Calcutta has been undertaken to create a database of the prevalence of comorbidity among people in the city.

Once all the collected data is uploaded, a rigorous analysis of the data is needed, a CMC official said. The data can provide leads on the most common comorbid condition among Calcuttans and also the average age when Calcuttans start to suffer from comorbidity, the official said.

“The presence of a comorbid condition is always a worrying factor. In case of Covid and dengue, people with comorbidity suffer more. The data will help the civic body tailor its response accordingly. It will act as crucial evidence for making public health policies in future,” he said.