Increasing the number of Covid beds and arranging medical equipment are on the immediate agenda of the group, called Entrepreneurs of Calcutta 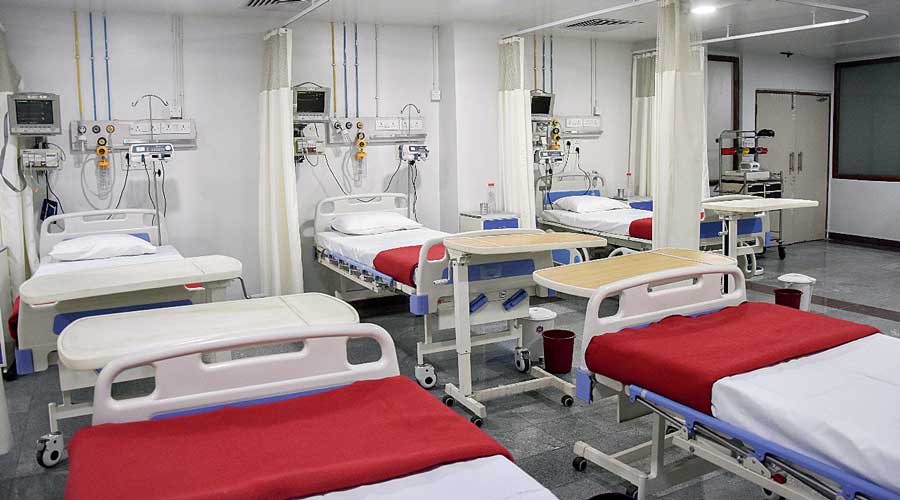 The Covid ward at Techno India-DAMA Hospital in Salt Lake which will have additional beds.
Telegraph picture
Debraj Mitra   |   Calcutta   |   Published 05.05.21, 01:47 AM

Several Calcutta-based entrepreneurs have come together to lend their support to the fight against the second wave of Covid-19.

Increasing the number of Covid beds and arranging medical equipment are on the immediate agenda of the group, called Entrepreneurs of Calcutta.

The group of entrepreneurs has collaborated with Charnock Hospital to set up 200 beds at the satellite Covid-19 facility at Haj House near Kaikhali.

The group has also collaborated with Techno India-DAMA Hospital in Salt Lake to add 100 Covid beds at the institute. “Twenty-four ICU beds will be ready by this week in the first phase. The remaining 76 should be ready by the end of this month,” said a doctor at the hospital.

The Rotary Club of Calcutta Visionaries and the Kolkata Gives Foundation are supporting the project.

Eighteen more beds are being set up at Anandalok Hospital in Salt Lake, said a member of the group.

“The EOK is run by a group of business individuals and start-ups from the City of Joy who are bringing in agility, quick thinking, crowd funding and nimble footedness to the fight. The initiative is called Breathe Again - in which they are partnering with leading government and private hospitals and creating an additional force against the second wave of Covid-19,” said a statement issued by the forum on Tuesday.

“The aim is to create a pool of 500-plus Covid beds. We are in talks with several private hospitals and charitable institutions to achieve the target,” said a member of the forum.

The increase in the number of Covid beds is proving to be inadequate at hospitals across the city. The scarcity of beds is delaying admission of many patients with very low oxygen saturation levels.

“Our aim is to equip the government and hospitals with secondary forces. This initiative provides the business and start-up ecosystem of Calcutta to give back to the city in this hour of need. We request more people to come forward and contribute in making this initiative a larger and more impactful success. Even a Rs 100 each contributed by residents of Calcutta will go a long way in making this crowd funding more impactful,” said Sagar Daryani, the co-founder of WOW! Momo, one of the members of the core team of the group.

The entrepreneurs are raising funds from among their own network and through crowdfunding.

The team is also fast-tracking the import of 50 BiPAP ventilators through the support of the Maharashtra Chamber of Commerce and a private company in Singapore. “The chamber is importing 500 BiPAP machines. We will get 50 machines for Calcutta in the first lot,” said a member of the core team.

“It's been quite surreal to be part of this journey in the last few days and I'm glad that collectively the decision was taken to ramp up ICU bed capacity at multiple hospitals,” said Meghdut Roy Chowdhury of Techno India Group, a member of the entrepreneurs’ forum.

“We want to use our connections and strengths in the best way possible to flatten the curve,” said Saraogi, managing director of Anmol Feeds.

Centre asked to provide jabs for May