Dad who tweeted minister daily gets to hug son 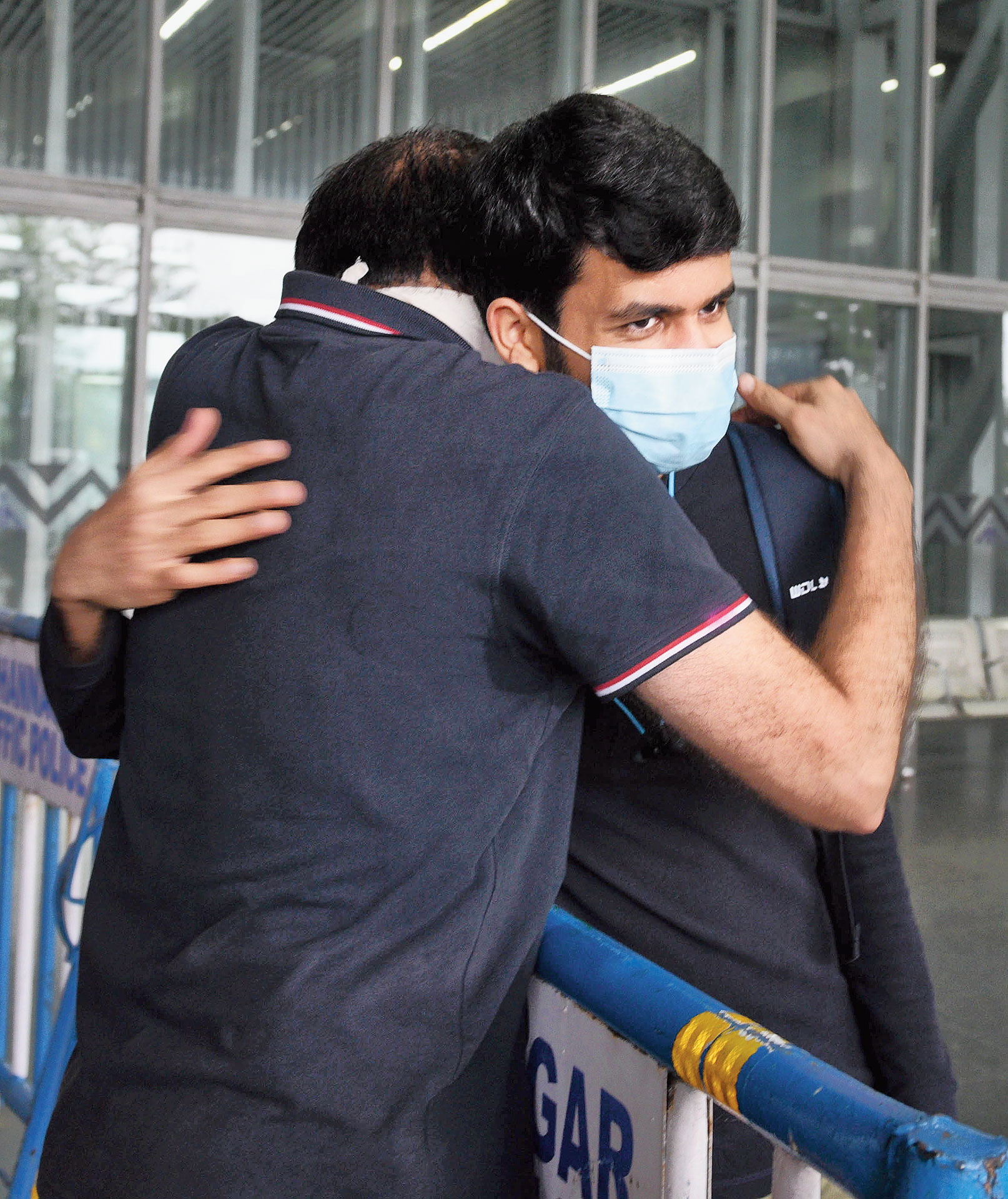 The first flight bringing back stranded Indians from the UK to Calcutta, as part of the Centre’s Vande Bharat mission, landed at the city airport on Friday afternoon.

The Air India flight from London, via Delhi, flew 71 passengers to Calcutta.

A flurry of activity was seen outside the airport’s Gate No. 5A as the fliers stepped out one by one. All were wearing masks and some had face shields, too.

As they arrived at a holding pen created on the road in front of the terminal, cars lined up to take them to hotels across the city, where they will stay in quarantine. The convoy had a pilot car in front and another police vehicle at the end.

The Telegraph spoke to some fliers and family members who had turned up at the airport. 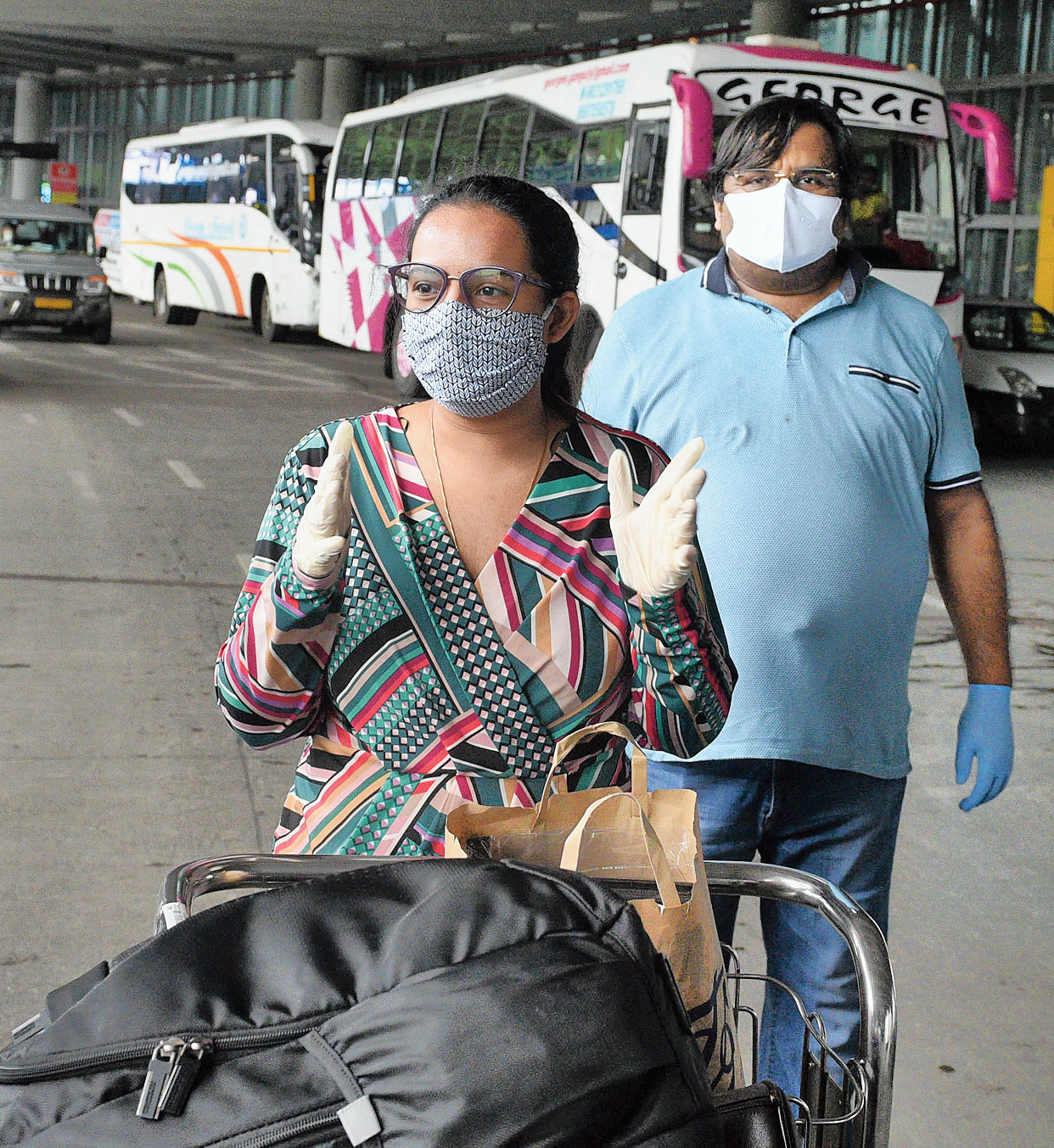 Pranjal Daga with her father Pradeep

Alone in a hostel

Lake Gardens resident Yash Sharma,19, who is studying filmmaking at Leeds Art University, was the sole occupant of his 10-storey hostel for many days.

The hostel, which can accommodate 250 students, became mostly empty by April. The lanky teenager said he had never thought that coming back home would bring so much joy.

With shops and restaurants closed, Yash had to depend on his mom’s cooking lessons to survive. He had bought a few packets of rice, daal, oil and snacks. 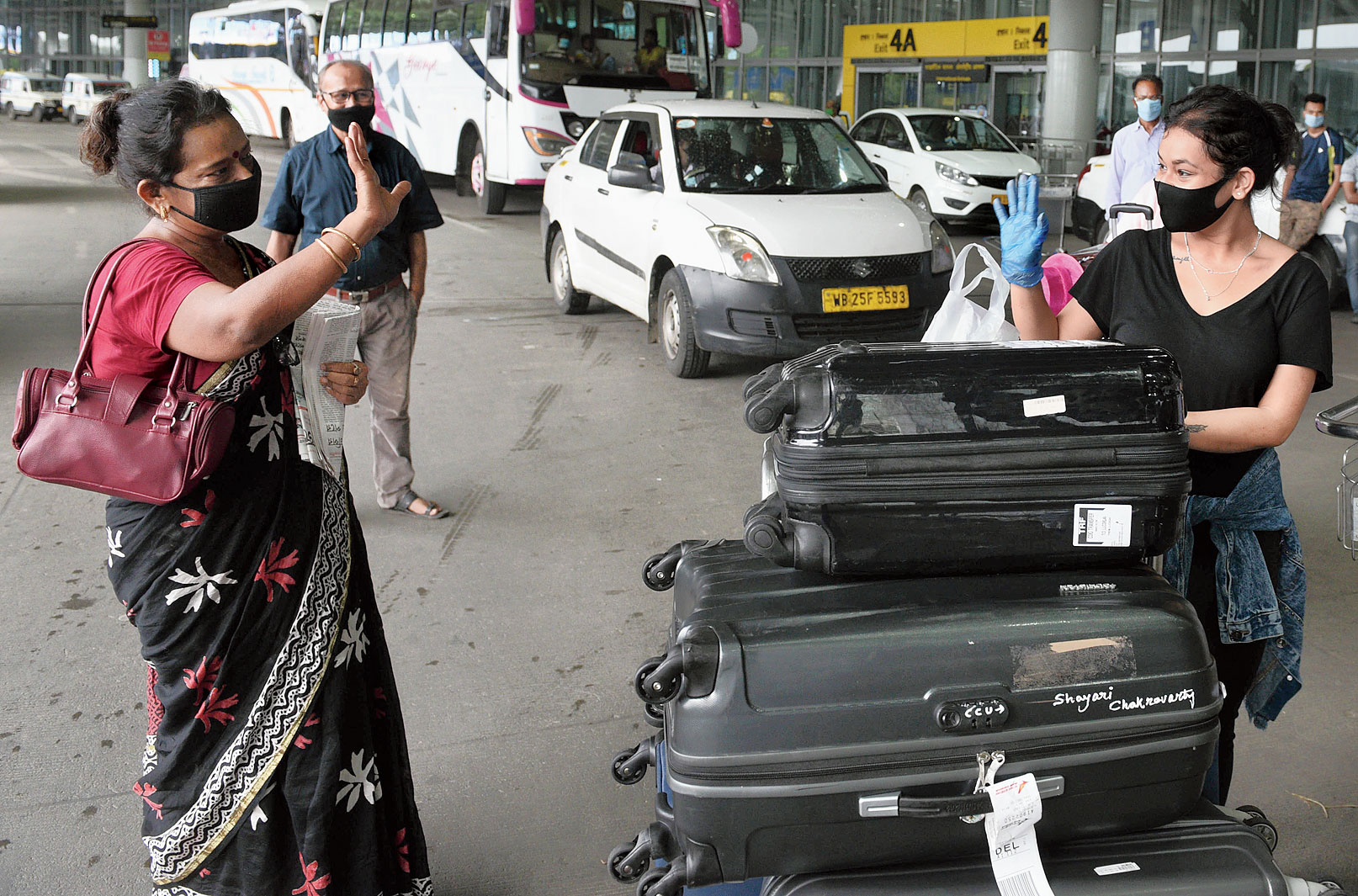 Shayari Chakraborty waves at her mother Kajari, asking her not to come closer, outside the airport on Friday

“Since I could not order food, I would cook rice and daal in a cooker. My mother had made me learn the basics of cooking a few weeks before I headed out to the university. There was nobody left to talk to and most of my friends who live in other cities had already left for home. I would feel bad about it,” said Yash.

A friend of Yash’s father picked him up from the hostel and dropped him off at a railway station. “The drive lasted around 45 minutes and I never saw such empty roads,” said Yash.

B.D. Sharma, Yash’s father, failed to keep his emotion in check when he saw his son step out of the airport. Sharma, who was waiting for nearly three hours, hugged his son over a police guardrail and patted his back.

“It was extremely stressful for us. Every day I would wake up, log into Twitter and start tweeting about my son’s plight to the ministry of civil aviation as well as minister Hardeep Singh Puri,” said Sharma. 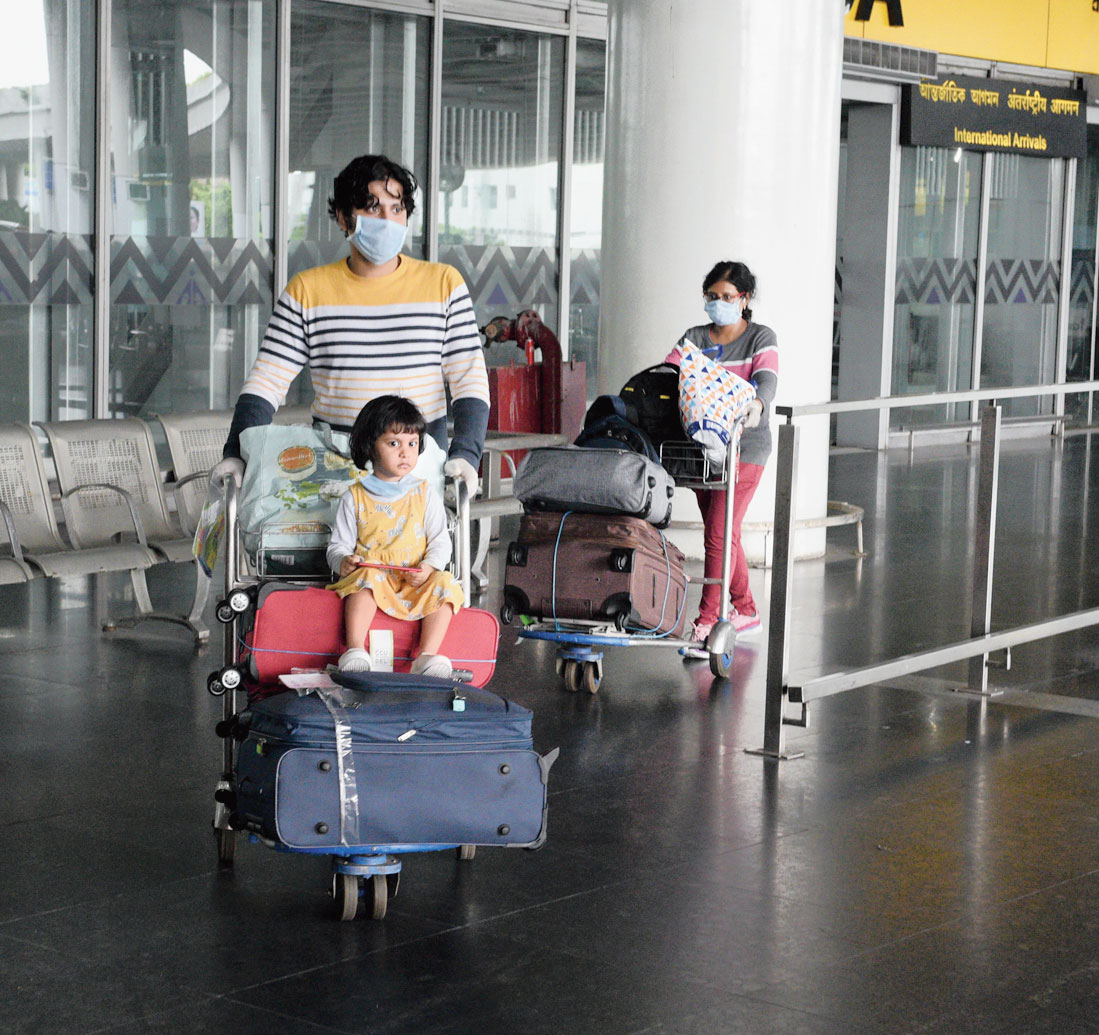 Two-year-old Sarodia Palit on a luggage trolley pushed by her father Deepayan, as they step out of the airport with mother Sutapa

Pranjal Daga, doing a postgraduate course in heritage management at the University of Bath, said she could not wait to have home-cooked food. Pranjal, who stays at a rented accommodation near the university, more than 185km from London, said her landlord had driven her to the airport.

Pranjal’s father Pradeep, a stock broker, said a five-course spread of her favourite dishes would be cooked once she returned home from the hotel where she would be quarantined. 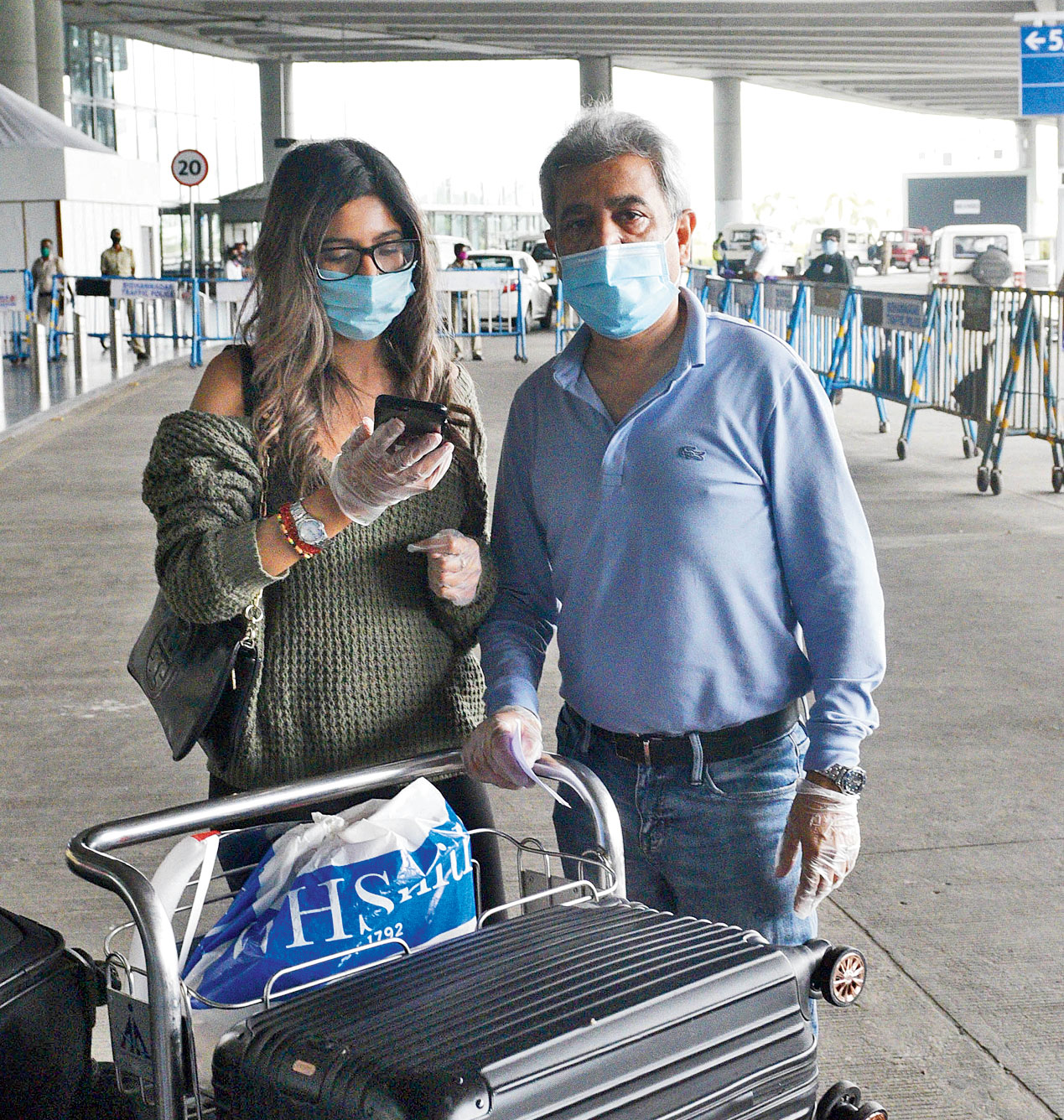 Som Mandal with his daughter. They have come to see Mandal’s father who is ill

Konnagar resident Shayari Chakraborty, who has just finished her course in culinary management from the Le Cordon Bleu culinary school in London, said she heaved a sigh of relief after reaching Calcutta.

“Fortunately, I managed to find a seat on the first flight out of London. I never thought that coming back would mean so much,” said Shayari.

Shayari’s mother Kajari handed out a packet to her daughter, who asked her to keep it on the ground before picking it up. “Don’t get too close to me. We must follow the social distancing protocol,” she said, before waving at her mother and father.

Homecoming has never been more dear Deepayan Palit, who works for a multinational company, said he had been posted to London for a project.

Palit’s wife Sutapa and their two-year-old daughter, Sarodoa, had gone to visit him and they were supposed to be back in April. But their tickets got cancelled due because of the lockdown.

“I was pretty excited when I learnt that I had been posted to London. However, I felt doubly happy when I could book our tickets back home. Homecoming has never been more dear for any of us,” said Palit.