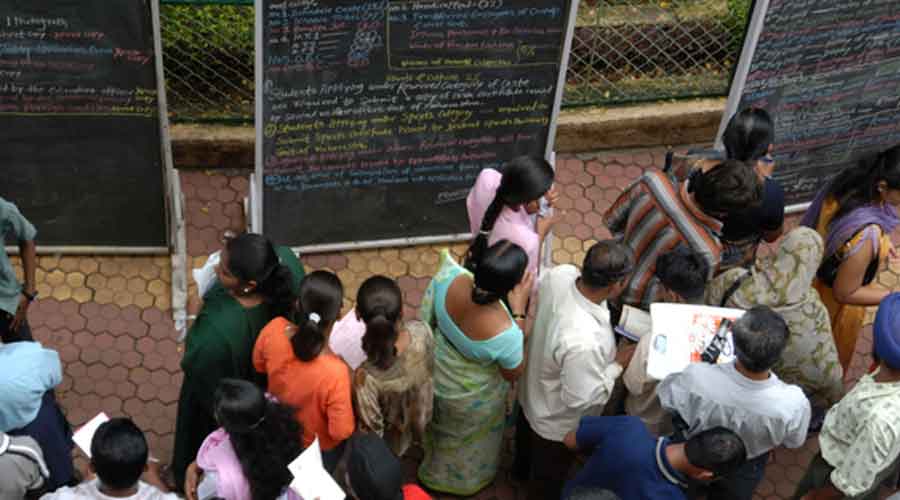 Students would usually seek admissions for studying honours courses in two or three subjects when they were charged fees for receiving and submitting online forms
Shutterstock
Mita Mukherjee   |   Calcutta   |   Published 19.08.20, 03:42 AM

Most colleges have seen a jump in the number of applications for admission since they stopped taking application fees, following an advisory from the state government, as many students are now applying for as many subjects as possible.

The trend has left many college principals worried that the admission process might be delayed.

Students would usually seek admissions for studying honours courses in two or three subjects when they were charged fees for receiving and submitting online forms, the principals of some colleges said.

Most colleges would charge Rs 125 to Rs 500 for every subject.

Students have been submitting applications for five to seven subjects after the fee waiver was put into effect on August 13 midnight, the principals said.

Shiuli Sarkar, the principal of Lady Brabourne College, said the institution had stopped charging students for admission forms and prospectuses after August 13 following the government advisory. “The number of online applications received by the college has increased many times in each subject,” she said.

The college, run by the higher education department, used to charge Rs 125 for each form.

A teacher at Asutosh College said that students who had just scored the required marks to be eligible to apply would not apply for the subjects that are in demand. “The trend has changed this year. Even low scorers are applying for the subjects in demand,” the teacher said.

The principal of New Alipore College, Jaydeep Sarangi, said that like previous years, the institution had been charging Rs 200 per application

from August 10 till the government advisory was issued. “We received around 500 applications a day on an average between August 10 and 14.

We started receiving 750 to 1,000 applications a day after we stopped taking money for the form,” the principal said.

The increase in the number of applications is likely to delay the admission process and lead to difficulties in preparing the merit lists, several principals said.

Many high-scorers are applying for too many subjects and this can block seats in subjects in demand, according to a principal.

“Say a student with high marks applies for seven subjects. She or he manages a berth in five. But the candidate will select only one.

The seats in the remaining subjects will remain blocked until she or he surrenders them…. Or, we will have to devise a system to detect such cases immediately. This can delay the admission process,” the principal said. The merit lists will be very long, another principal said.

The government had announced on August 13 that universities and colleges would not charge undergraduate aspirants for application forms and prospectuses.

The colleges started distributing and receiving online admission forms on August 10. Forms can be submitted till August 26.