State health dept has also planned to conduct a mop-up operation between February 21 and 25, but what will be done during the period is still not clear 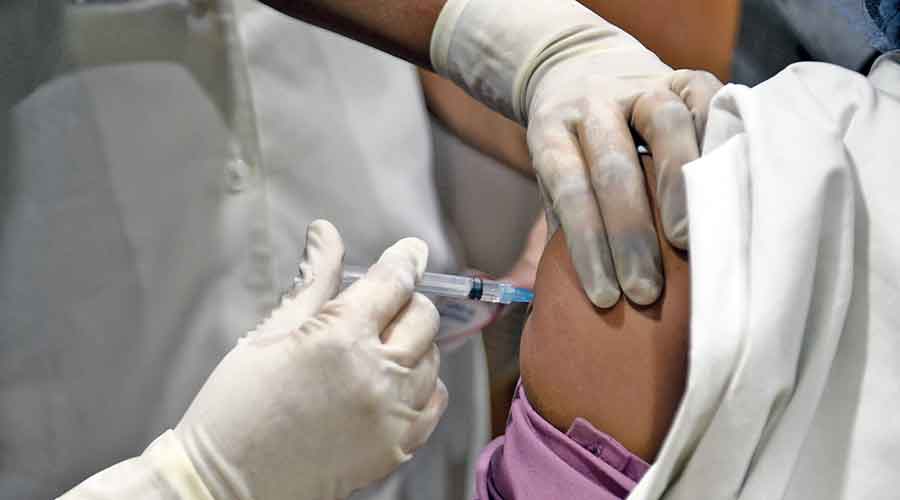 All health-care workers in Bengal have to be administered the first dose of a Covid vaccine by February 20, the state government has said, prompting hospitals to draw up a list of employees yet to be inoculated.

Bengal has so far administered the first dose of Covishield or Covaxin (the two Covid-19 vaccines approved for emergency use in India) to 495,845 people, the vast majority of whom are health-care workers, health department officials said.

“We have set February 20 as the deadline for administering the first jab to all health-care workers. This is part of the plan to move forward with vaccination,” the official said.

The Centre has informed the health department that vaccination of people above 50 and those suffering from comorbidities would start after March 6.

“During an online meeting with us, officials of the Centre told us to remain ready so that vaccination of the general population can start after March 6. But no date was mentioned. We expect the date will be announced this week,” another official of the health department said.

“Since we have to begin vaccination of people above 50, we cannot carry on vaccinating health-care workers for an endless period. There has to be a deadline.”

Various vaccination sites in the city – private and government hospitals, as well as ward clinics run by the Calcutta Municipal Corporation – have started identifying health-care workers who are yet to be inoculated and are informing them about the deadline.

Sudipta Mitra, the chief executive officer of Peerless Hospital, said on Sunday that about 95 per cent of the hospital’s health-care workers have been inoculated.

“The state health department has informed us about the February 20 deadline. We have asked the heads of all departments at our hospital to inform the health-care workers in their respective departments who have not yet received their first dose about the deadline,” he said.

“We are identifying the health-care workers in our hospital who have not yet been vaccinated.”

Jyotirmoy Pal, a professor at the RG Kar Medical College and Hospital who is actively involved in the inoculation programme at the hospital, said repeated WhatsApp messages were being circulated in the groups of doctors and other health-care workers of the hospital, informing them about the deadline.

“The majority of the health-care workers at our hospital have got the first dose of a Covid vaccine,” he said.

Indranil Biswas, the medical superintendent of the Calcutta Medical College and Hospital, said they, too, were spreading the message through WhatsApp and word of mouth.

“Taking the vaccine is voluntary. We cannot force anyone to take it, but we can spread the information about the deadline so that no one who is willing to take the jab misses out,” said Biswas.

The state health department has also planned to conduct a mop-up operation between February 21 and 25, but what will be done during the period is still not clear. “It could be that the  health-care workers who are not registered to get the vaccine will get a last chance to do so. In that case, they may be asked to receive the first dose by February 25,” said an official.

Many private practitioners, who are not associated with any hospital or nursing home, are still to be vaccinated, he added.

Vaccination of frontline workers such as police personnel and municipal workers started about 10 days ago.

It will continue for some more time.

The state has about 2.8 lakh frontline workers, close to 1 lakh of whom are from Calcutta.