Till Monday, only those arriving from abroad were being screened 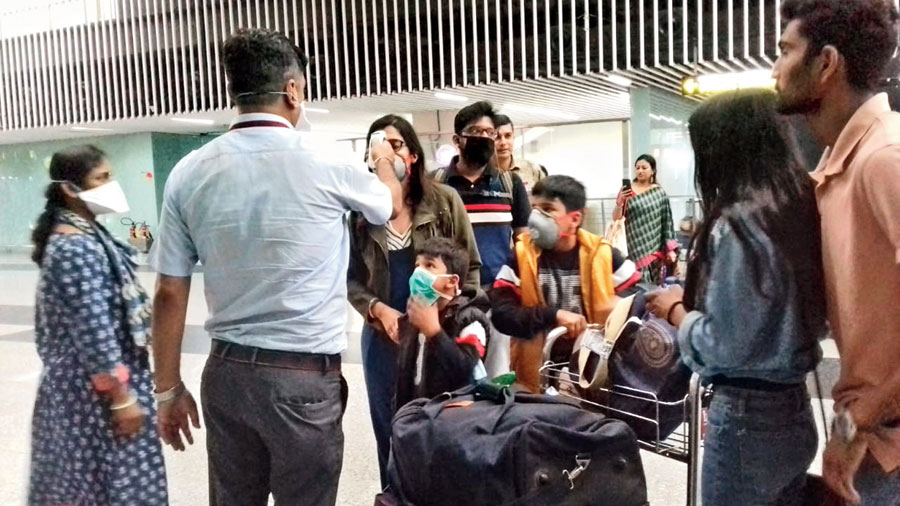 Till Monday, only those arriving from abroad were being screened.

“Health workers with hand-held infra-red thermometers were screening passengers arriving on domestic flights,” an airport official said. “The passengers are being screened for fever and any other coronavirus symptom such as cold and cough.”

The passengers are being screened near the exit gates 1A, 1B, 3A and 3B, through which domestic fliers leave the terminal. “Those displaying symptoms of possible coronavirus infection will be sent to government hospitals for further medical examinations,” the official said.

Till late in the evening, no one was sent for tests.

Around 25,000 domestic passengers arrived at the Calcutta airport on Tuesday, said officials. Many are students studying in other cities. Almost all were returning home because of shutdowns announced by various state governments to prevent the spread of the coronavirus.

“There are several states where people have tested positive for Covid-19. Besides, there are many from Calcutta who went to coronavirus-affected countries but did not return to the city directly from there. These passengers spent a week or so elsewhere in India before returning home. So, we have decided to screen domestic passengers,” a health department official said.

At least one doctor, one nurse and one attendant will be stationed at the airport round the clock. The health department has withdrawn some doctors and nurses responsible for looking after schoolchildren so they could be deployed in quarantine centres and the airport.