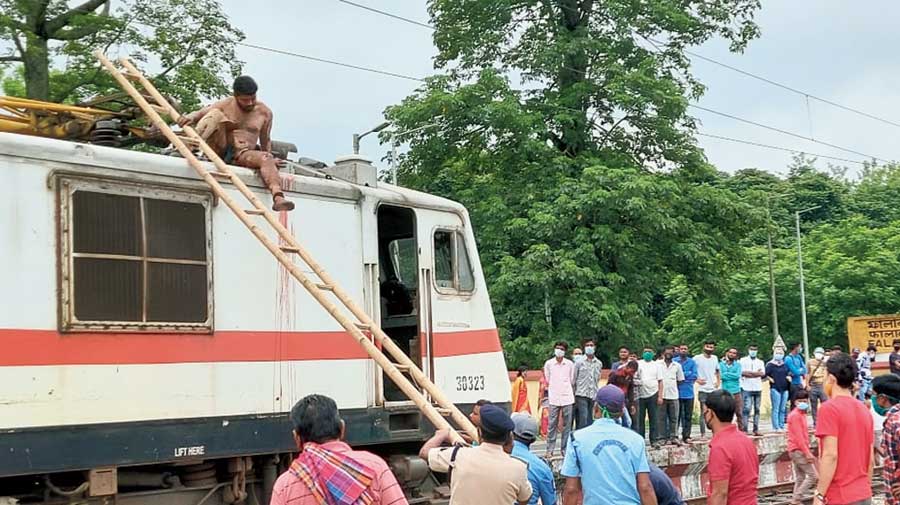 A ladder being used to bring down the youth from the engine at Falakata station on Friday afternoon.
Anirban Choudhury
Our Correspondent   |   Alipurduar   |   Published 12.06.21, 01:16 AM

Train movement along the main New Jalpaiguri-New Cooch Behar route got disrupted for an hour on Friday afternoon as a youth travelling by the Sealdah-bound Uttarbanga Express suddenly mounted on the engine and tried to bring down the pantograph when the train halted at Falakata station here.

A pantograph is a kind of a power collector mounted on electric trains.

Bodo was initially admitted to the super-specialty hospital in Falakata and later sent to North Bengal Medical College and Hospital in Siliguri in a critical condition.

Sources said around 3.45pm, as the train reached Falakata station, people suddenly heard a big thud. They then saw an object on the top of the engine that was afire. Within minutes, they realised it was a man.

Immediately, power connectivity of the engine was snapped by railway authorities. A fire engine was rushed in.

“As the train reached Falakata, we heard a loud sound and got off the train to see an object on fire on the engine and later realised it was a man,” said Rohit Das, a passenger headed to Calcutta.

A railway official said they as well as RPF and GRP personnel rushed to the spot and Bodo was brought down with the help of a ladder and rope.

“Preliminary probe revealed the youth had touched the pantograph to bring it down and suffered serious injuries,” said a railway official.

Train movement along tracks got disrupted for about an hour.

“It is a rare and unfortunate incident. An inquiry has been ordered. We are trying to find out why he tried to grab the pantograph,” said S. Chanda, the chief PRO of the Northeast Frontier Railway.