From September 23, the Himalayan kingdom will reopen its land borders after over two-and-a-half years, that is, since the pandemic erupted in 2020 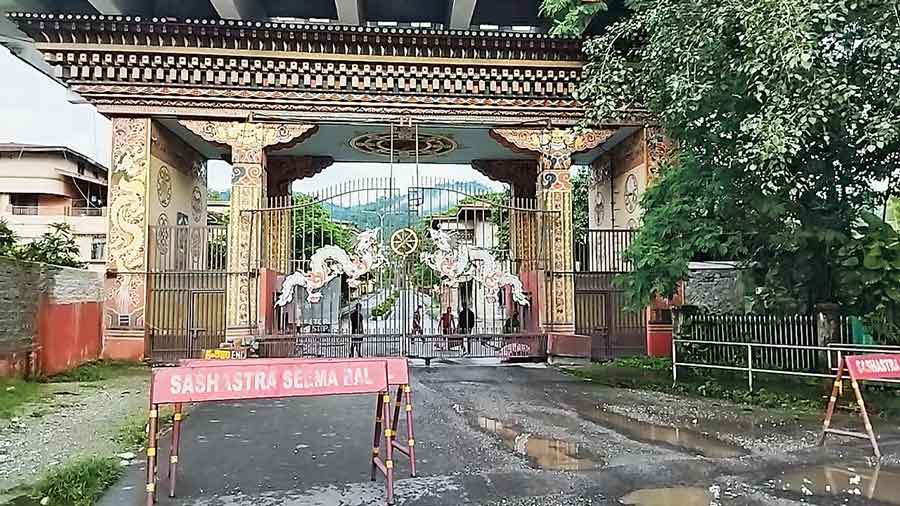 The gate at the India-Bhutan border separating Jaigaon and Phuentsholing.
File picture
Our Bureau   |   Siliguri/Alipurduar   |   Published 16.09.22, 02:15 AM

The royal government of Bhutan has come up with two new notifications to monitor the movement of people — both Bhutanese and residents of other nations — along the land borders of the country.

From September 23, the Himalayan kingdom will reopen its land borders after over two-and-a-half years, that is, since the pandemic erupted in 2020. Movement of people via these borders — with Jaigaon-Phuentsholing being the most popular route — had stopped since March 2020. Jaigaon falls in Alipurduar district.

On September 12, the regional immigration office of Phuentsholing — under the department of immigration of the ministry of home and cultural affairs —  issued a notification that anybody entering or exiting Bhutan via the pedestrian terminal in the bordering city has to pre-register by filling up an online form.

Earlier, any Indian could cross the gate and enter Phuentsholing, roam around and stay in the city. Beyond Phuentsholing, one had to visit the immigration office. While the Bhutanese authorities think that the new new rule will facilitate faster immigration clearance, the mood in Jaigaon was sombre.

Ramashankar Gupta, the general secretary of Jaigaon Merchants’ Association, said the new arrangement would be inconvenient for Indians in the border areas like Jaigaon.  “We are not clear how long the pre-registration would be valid for. If we have to carry out this formality every day, it is cumbersome as we need to move to Phuentsholing a number of times daily for business. The same stands true for the Bhutanese who live in the bordering town. The earlier arrangement (free movement within Phuentsholing) was better,” said Gupta.

Suresh Thakuri, who runs a travel house in Jaigaon, said they are already perturbed by the sustainable development fee (SDF) of Rs 1,200 per day for an Indian tourist in Bhutan. “Now this pre-registration is another formality,” he said.The Bhutan government, in its second notification issued on September 13 by the department of revenue and customs under the finance ministry, announced a duty and tax-free baggage allowance of 3,000 Ngultrum (Bhutanese currency) for anybody travelling via the land borders. Earlier, there was no such fixed allowance for people entering Bhutan through the land borders.