Dangling cables to be laid under the pavements 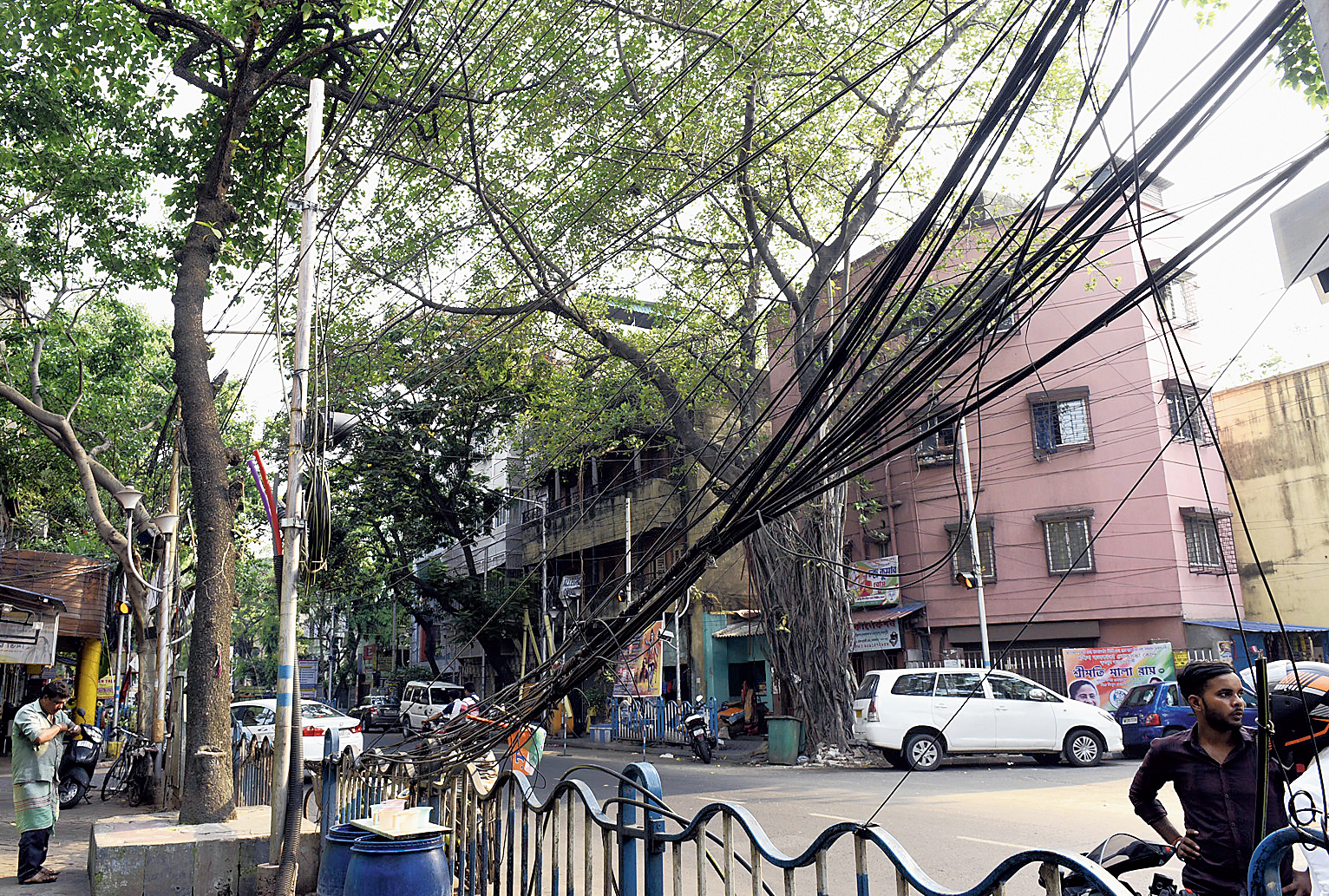 The civic body has readied a plan to bury the mesh of dangling cables, which are an eyesore and a threat to public safety, and will start the relocation on two roads in south Calcutta.

“A detailed project report has been prepared to make the cables dangling over Alipore Road and Harish Mukherjee Road pass through conduits to be laid under the pavements,” an official at the Calcutta Municipal Corporation said.

“If the pilot project is successful, the plan will be implemented on other roads of the city.”

The corporation will install polymer pipes under the pavements, totalling around 20km, of the two roads. Once the conduits are ready, all multi-system operators (MSOs) will be asked to insert their cables through them.

Metro had on August 31, 2017, published a report highlighting the anarchy of overhead cables.

In January last year, 18-year-old Mohammad Tausib Alam died of head injuries after his two-wheeler got caught in a heap of cables lying on the northern flank of the Park Circus No. 4 bridge.

A police officer had said the teenager had lost his balance after the front wheel of the bike got entangled in the cables.

The Telegraph had on September 17 last year reported that two hydraulic ladders that were sent to help firemen engaged in dousing the Bagree Market blaze could not be used because a mesh of overhead wires came in the way.

A mesh of overhead wires along Alipore Road.
Picture by Sanat Kumar Sinha

Elaborating on the civic body’s plan, an engineer said: “We will make three conduits. Two of them will be of 9-inch diameter and one of 6-inch diameter. The conduits will be made of high-density polymer, not concrete.”

The two 9-inch polymer pipes will carry cables of the various MSOs and broadband service providers, while the 6-inch diameter pipe will be used to carry power cables.

The city has at least seven MSOs, which transmit TV signals through cables, and more than 12 broadband service providers, which provide Internet connections using the same method.

Since MSOs and broadband service providers compete with each other across the city, a pole in any neighbourhood is likely to have wires of many of them.

“The conduits will run under both pavements of Alipore Road and Harish Mukherjee Road,” the engineer said. “The polymer pipes will be laid under the pavements totalling 20km. The two roads together are around 10km long.”

Manholes will be made after every 50m for engineers or technicians to access the conduits to fix any snag or insert a new cable.

“The work will cost about Rs 10 crore. We have prepared a detailed project report, which will be sent to the state government for approval,” the engineer said.

“Once the government gives its approval, we will float a tender to select a contractor. We think it will take around six months to place the conduits.”

New Town has underground conduits criss-crossing the township. All cables — be it for television, broadband, electricity or telephones — pass through these ducts. Each service provider is given a separate duct between three and five feet wide.

The fire at Bagree Market has brought back to the fore the hazard posed by the spaghetti-like cables that lurk overhead in Calcutta. Two hydraulic ladders were brought in to fight the blaze but could not be used because the mesh of cables stood in the way, fire service officials said.