The body of Sishupal Sahish, 23, was spotted 12 hours after he had gone missing 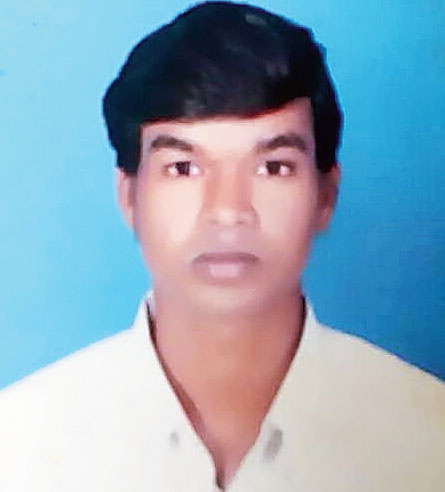 A member of the BJP’s youth wing was found hanging from a tree near his home at a village in Purulia district on Thursday morning.

The body of Sishupal Sahish, 23, was spotted 12 hours after he had gone missing.

His father and a BJP member of the local Sirkabad gram panchayat, Yadav Sahish, alleged that Trinamul-backed miscreants had murdered Sishupal.

“Trinamul workers had threatened my son for campaigning for the BJP in the Lok Sabha polls. He was involved in an argument with them over writing wall graffiti on Wednesday,” said Yadav.

He said the Trinamul supporters had asked Sishupal not to write the graffiti for the BJP.

“My son was an active member of the BJP’s youth wing. Trinamul had been targeting him since rural polls last year as he was a good organiser and helped the BJP win the Sirkabad gram panchayat,” said Yadav.

Trinamul has denied the charge levelled by Sishupal’s father. “We are in no way involved in the death. Let police unearth the truth,” said Nabendu Mahali, a Trinamul general secretary in Purulia.

Yadav said Sishupal had gone missing around 8pm on Wednesday after he had left home for some work.

“We launched a search for Sishupal as he did not return home even after a long time. This morning, we got to know from some neighbours that his body was hanging from a tree,” he said.

“I will lodge a police complaint after performing my son’s last rites,” Yadav added.

The body was found at Senabona in Arsha.

“We have started a case of unnatural death in the absence of a complaint and sent the body for post-mortem. We are waiting for autopsy report,” said Akash Magharia, the superintendent of police, Purulia.

In May and June last year, two workers of the BJP Dalit Morcha — Trilochan Mahato and Dulal Kumar — were found hanging from trees near their respective homes in Purulia’s Balarampur.

The BJP’s Bengal general secretary and the party observer for the Purulia seat, Sayantan Basu, said Sishupal was the fourth supporter to be killed in the district. He also went to Sishupal’s house and spoke to his family members. “The procession of death in Purulia started after last year’s rural polls. With Sishupal, the death toll has climbed to four. We want the CBI to probe the incident as we have no faith in the state police,” said Basu who was in Purulia to accompany BJP candidate Jyotirmoy Mahato to file nominations on Thursday.