Advertisement
Home / West-bengal / Attempts to polarise electorate on basis of religion didn’t work in secular Bengal: Shivprakash
'UP brand of Hindutva did not work' 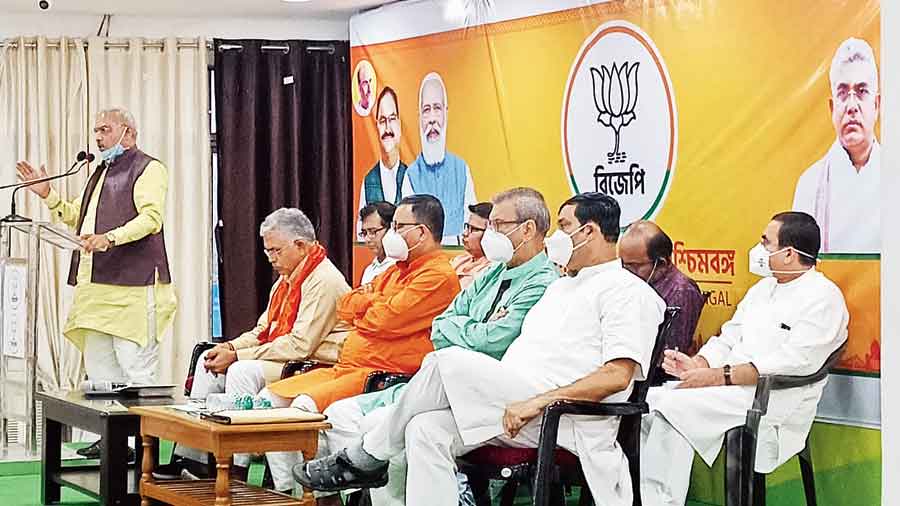 A key backroom strategist of the BJP for Bengal Assembly elections reportedly admitted at a closed-door meeting of the party on Monday that the central leadership had made a mistake by not heeding advice that the state couldn’t be won by replicating the Uttar Pradesh model.

Shivprakash, the joint national general secretary (organisation) of the BJP, made the admission more than two-and-a-half-months after the Bengal election results had surprised the party, which was bullish about bagging over 200 seats.

Shivprakash, multiple BJP sources said, even went to the extent of admitting that attempts to polarise the electorate on the basis of religion didn’t work in “secular” Bengal as the “Hindutva brand of politics” didn’t appeal to most of the voters.

“Bengal has to be won in its own way,” Shivprakash was quoted to have said at one of the multiple meetings of the BJP he presided over at its Hastings office here on Monday.

“We were told that Bengal couldn’t be won in the UP model, but we refused to believe that.…Now we realise that it is true....People here are mostly secular and hence, didn’t fall for the Hindutva brand of politics...,” a source quoted him saying at the meeting.

One swallow doesn’t make a summer, but the realisation of Shivprakash — a senior leader in the saffron camp in terms of the resources deployed in Bengal, but a minnow in the national hierarchy — is bound to intensify the debate in the BJP on its political strategy in the state that the party is desperate to win.

Even after the poll debacle, scores of central and state leaders had indicated that the party would pursue the path of communal polarisation in Bengal to ensure that it bags the majority of votes of the Hindus, who comprise around 70 per cent of the electorate, in future poll battles.

“In some of the internal analyses, it was stressed that the party’s polarisation agenda did work and that was why it got around 2.38 crore votes in a state where Muslims comprise around 30 per cent of the electorate... Some leaders had felt that if more efforts were given at polarising the voters along communal lines, the party would get at least six to eight per cent more votes and that would be enough to beat Trinamul,” a source in the state BJP had said in the immediate aftermath of the elections.

The fact that the strategy of pursuing the Hindutva line even after the poll drubbing had the blessings of Delhi leadership became clear in recent months as Trinamul Congress turncoat Suvendu Adhikari, who is the leader of Opposition in the Bengal Assembly, became more aggressive in toeing the Hindu-Muslim line.

Against this backdrop, Shivprakash’s comments have added to the confusion prevailing in the state unit on how to go about expanding the BJP in Bengal.

“We are confused. So long, we were under the impression that our leaders are happy how polarisation has worked in the state. But now Shivprakashji came up with a different opinion,” a state BJP functionary said.

Shivprakash’s comments have come at a time when he is the sole representative of the central leadership in the Bengal unit. The party’s minder for Bengal Kailash Vijayvargiya has not been to the state since May 2. One of his two deputies, Arvind Menon, has recently tied the knot and believed to be busy with his family life.

“For the workers at the grassroots like us, Shivprakashji is the man representing Delhi at the moment. When he says something contrary to what we have been asked to do so far, it gets very confusing,” said the chief of a mandal, the BJP’s smallest organisational unit, present at the meeting.

Another group of leaders strongly objected to Shivprakash’s comments later while speaking to this correspondent.

They said he was trying to deviate focus from the original reasons behind the poll debacle, which was faulty candidature. “Many of us in the state BJP don’t believe in fiery Hindutva politics. People would have voted for us if the candidates were alright,” a state BJP vice-president said.

Some other leaders present at Monday’s meeting, such as Trinamul turncoat Sabyasachi Dutta, purportedly argued that the BJP failed to establish its Bengal connect and lost because of the inability to comprehend the complex Bengali ethos, which considers “Jai Shri Ram” chants alien.

“Sabyasachi suggested that we invoke deities like Durga and Kali, who are essential to Bengal, more than Ram.…He was not allowed to speak much after that,” a source present at the meeting said.

He also purportedly suggested that the party continue with the Durga Puja it had begun last year. Otherwise, people would think that last year’s Puja celebrations were only with an eye on the polls and the party had little respect for the goddess.