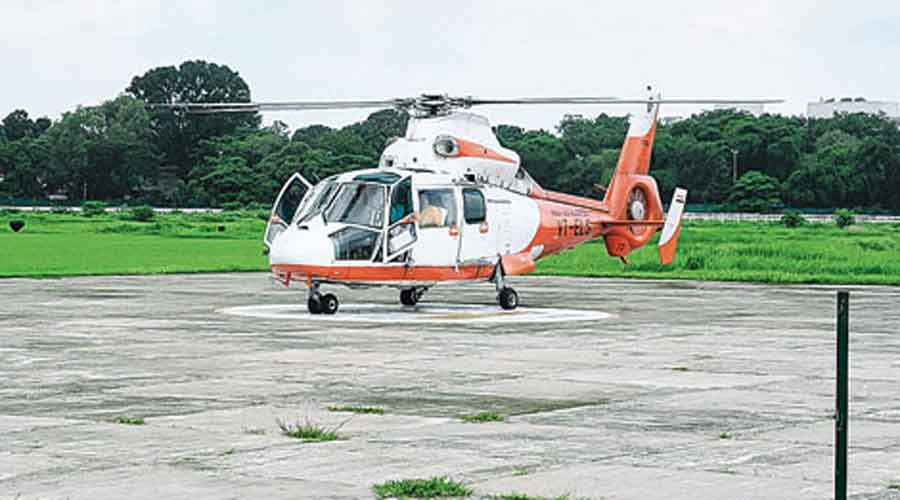 In other districts, temporary helipads are made during visits of dignitaries, such as the chief minister or the Prime Minister.
File photo
Snehamoy Chakraborty   |   Bolpur(Birbhum)   |   Published 21.09.21, 03:08 AM

The state government will set up four permanent helipads in remote and strategic locations of the Sunderbans and coastal South 24-Parganas in a bid to reach out to these pockets during cyclones or floods when vast swathes are inaccessible to road or waterways.

“South 24-Parganas is a unique district, with vast areas of the Sundarbans, and nearly a hundred riverine islands. During disasters, evacuating people to relief centres and transporting pregnant women and aged people with health emergencies get very difficult. Helipads will help us respond immediately to people in distress with choppers,” said P. Ulaganathan, the South 24-Parganas district magistrate.

Sources in the transport department said the district would be the only one in Bengal with four permanent helipads for mitigating natural disasters.

In other districts, temporary helipads are made during visits of dignitaries, such as the chief minister or the Prime Minister.

District officials said in the wake of three cyclones, Fani, Amphan and Yaas, it was seen that evacuation from isolated islands was a challenge with damaged roads. Journey by waterways was time-consuming. Even central teams or VIPs can’t access the worst flood-hit areas because of lack of communication. These helipads will help minimise that problem too, said sources.

After Yaas hit the coastal pockets and islands of the Sundarbans, district officials did a survey to find locations where helipads could be set up. A special committee was formed, which earmarked four government plots in Gosaba, Patharpratima, Kakdwip and Diamond Harbour.

“All the helipads would be set up in four islands, from where other islands can be covered easily. The plots we chose are on elevated land so that helipads won’t be submerged during crises,” said a senior official. The public works department will construct those helipads with its own funds, he added.

A senior official in South 24-Parganas recounted that they had to send a boat during one such disaster to bring a pregnant woman to a local hospital in Gosaba. “It took around four hours. If we had a helicopter, we could have done it a lot sooner. We receive alerts from several people in crisis, but can’t reach them with proper service. The choppers will help us do so,” the official added.

Sagar Island earlier had a helipad, which got damaged.