Government pays dearness allowance at 34 per cent, which the employees say is 35 per cent lesser than that paid by the central government 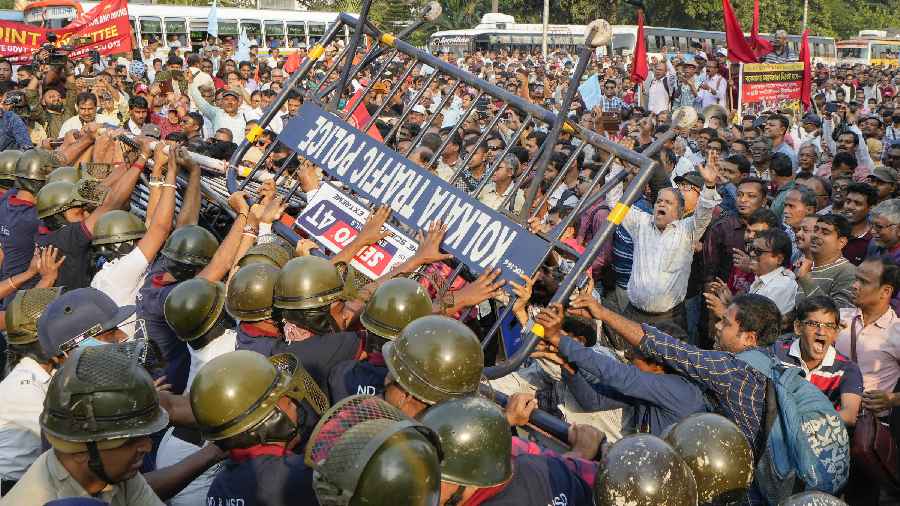 State government employees attempt to break a police cordon as they march to West Bengal Assembly to press for their demands to clear their pending dearness allowance (DA) in Calcutta
PTI picture
PTI   |   Calcutta   |   Published 23.11.22, 06:04 PM

A section of West Bengal government employees Wednesday clashed with the police when they tried to enter the assembly venue over payment of DA installments by the state.

The employees, who had gathered near the downtown Esplanade area of the city, were prevented by the police from proceeding to the Assembly building, officials said.

The Calcutta Police set up barricades on the road leading to the assembly house and the employees broke them and marched towards the assembly area, where Section 144 Cr PC is in force.

With the assembly now in session, the police stopped the demonstrators, rounded them up in vans and took them into preventive custody.

Some of the employees suffered minor wounds when they exchanged fisticuffs with the police personnel, the officials said.

"About 42 people who participated in protests outside the Assembly demanding higher DA have been arrested," a police official said.

The Bengal government pays dearness allowance at 34 per cent, which the employees say is 35 per cent lesser than that paid by the central government.

The state government maintains that it is not possible given the financial situation.