The Brigade rally was historic not just for bringing the Left and the Congress leaders together, but also for pitchforking a cleric on centrestage 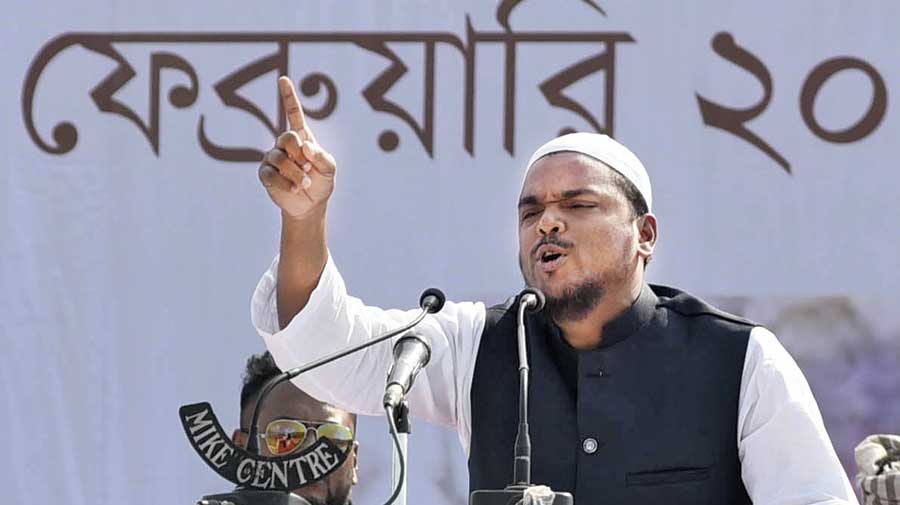 Bengal Congress president Adhir Chowdhury was speaking at the Brigade Parade Grounds on Sunday when chants of “bhaijaan, bhaijaan” rent the Brigade air, forcing the veteran to pause midway, indicating that the road ahead for the Left-Congress-ISF alliance would be rocky.

“Should I stop?” Chowdhury, who looked upset, was overheard as senior Left leaders like Md Salim and Biman Bose made a beeline to welcome a young man in white kurta-pajama, a skull cap and a dark blue jacket, on the dais.

Chowdhury had to stop because the crowd had erupted into cheers on seeing Furfura Sharif cleric Abbas Siddiqui who has floated the Indian Secular Front (ISF). Siddiqui waved at the crowds, and Left leaders rushed to greet him.

The Brigade rally on Sunday was historic not only because it brought the Left and the Congress leaders together on such a huge political platform for the first time, it would also be remembered as it pitchforked a cleric into the centrestage of Bengal polls 2021.

Md Salim requested Siddiqui to ask his followers to settle down at which the Congress state president said he would not continue. Scores of Left leaders like Bose, Salim and CPM state secretary Surjya Kanta Mishra placated Chowdhury.

A reluctant Chowdhury, who had lost the flow of his speech, did finish his address and earn a huge round of applause, but by then the audience at the Brigade had come to know that Siddiqui was the showstopper.

Siddiqui who had walked on the stage even as Chowdhury was speaking and waved at the crowds, gesticulated to his supporters to settle down. He then seated himself between his party president Simul Soren and Forward Bloc’s state secretary Naren Chatterjee.

Going with the theme of the meeting, Siddiqui in his address went all out against Trinamul and the BJP.

“We have to take a vow that we will have to smash the black arms of the BJP,” Siddiqui said. “In the coming days Bengal will slip out of the hands of Didimoni (Mamata Banerjee) and we will rule here,” he added.

As the crowd erupted in cheers each time Siddiqui attacked Mamata or the BJP, it was clear that he was the top draw of Sunday’s meeting.

However, the other features of his 10-minute address,  left many wondering whether he would at all add value to the fledgling alliance because of his less-than-friendly approach towards the Congress.

“I would like to thank Mohammad Salim, Bimanda (Bose) and all workers, responsible members of the Left parties….They’ve shown honesty and have agreed to give most of the seats we had demanded. Hence, from this Brigade grounds, I urge all the people who love me, to fight for their motherland, to give their blood in all the seats that Left parties will contest,” Siddiqui said making it clear that ISF would go all out campaigning for the Left.

However, he didn’t say anything like about the Congress, which jarred.

Towards the end of his speech, Siddiqui clarified his stand. “I’ve come here for my share. I’ve not come to appease anybody…Hence if anyone wants to extend an arm of friendship, this Abbas Siddiqui will campaign for them in the future,” Siddiqui said, hinting he wouldn’t compromise on the number of seats he demanded from the Congress.

Siddiqui’s statements indicated that the alliance among the three constituents is yet to be firmly stitched even though the state elections are scheduled to start on March 27.

The ISF wants to contest in many seats in Malda, Murshidabad and North Dinajpur, which has upset the Congress. The Left and ISF have finalised a deal, but problems with the Congress have not been ironed out yet.

“The manner in which he was trying to belittle Congress was in poor taste,” said a senior leader of a Left Front ally.

During Siddiqui’s address, Chowdhury and other Congress leaders like MP Pradip Bhattacharya and MLA Abdul Mannan were seen either fiddling with their cellphones or sitting with blank looks on their faces.

As soon as Siddiqui had finished his speech, the organisers had to ask the crowd to be patient, saying there were many other speakers left, along with CPM general-secretary Sitaram Yechury.

All the leaders present on the stage were seen holding hands together as a sign of unity, but Siddiqui and Chowdhury remained separated by people on the dais.

“Our party doesn’t run on the commands of Abbas Siddiqui... Our alliance is with the Left and we are yet to finalise on the number of seats we will contest. How can we say how many seats we will give others?” said Chowdhury after the meeting.

Amid widening differences between the ISF and the Congress, the Left leaders were seen trying their best — both on the dais and behind closed doors — to ensure truce, but sources said the fine balance seemed easier said than done after Sunday’s meeting.