'After using Singur politically, they abandoned it; assets of party rank and file grew as people suffered' 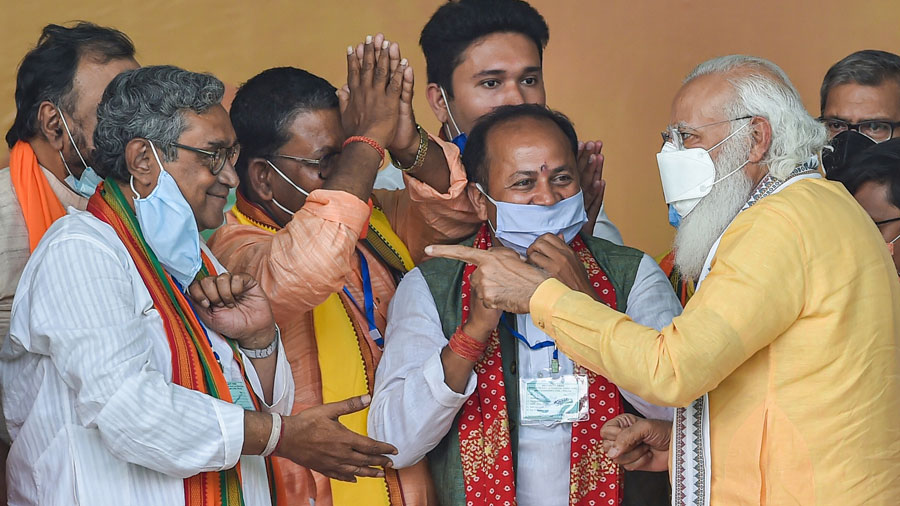 Prime Minister Narendra Modi on Saturday hit out at one of the weakest links in the Trinamul’s armour, the lack of industry and employment opportunities in Bengal, tying it directly with  anti-land acquisition movements led by Mamata Banerjee during her days in the Opposition.

“Old industry is shut. The road for building new industry is also closed. The opportunities for doing business and generating employment is also closed. Once people from different parts of the country would come to work in the factories of Bengal. Now the youth of Bengal are going elsewhere,” said Modi addressing an election campaign meeting in Hooghly’s Tarakeswar, about 25 km from Singur, which was once floated as the destination for industrial revival of the state.

“They are proud that they stalled industry in Singur. How they betrayed Singur you know it better than me. After using Singur politically they abandoned it. Industry did not come up in Singur and farmers are languishing,” Modi said.

The Prime Minister said that the Trinamul government of the last 10 years lacked political will.

After taking oath to form the government in May 2011, the first cabinet decision of the Mamata Banerjee government was to return the land that the erstwhile Left Front government had acquired from farmers in Singur for a proposed automobile plant of the Tatas. While work on the factory was on, resistance to the land acquisition  grew with Mamata leading the movement from the front with a now well-known “26-day hunger strike".

The Tatas relocated the project to Gujarat’s Sanand and the unfinished automobile plant,  lying desolate along the Durgapur Expressway, was blown up by dynamite in 2016, burying the dreams of an industrialised Bengal.

While Modi spoke about betrayal by the Trinamul, his party too had then supported Mamata’s movement against the Left Front government.

In this election, the BJP has fielded the former Trinamul minister, Rabindranath Bhattacharya, the face of the Singur movement and one of the fiercest opponents of the automobile factory in Singur. Known in the area as “Mastermoshai”, Bhattacharya switched sides days before the polls.

In its rush to find suitable faces to take on the Trinamul, the BJP has fallen back on turncoats of Bengal’s ruling party.

While Tarakeswar will go to the polls in the next phase on April 6, Singur is scheduled in the fourth phase.

Raising the pitch on alleged corruption by the Trinamul rank and file, Modi said their assets increased while people suffered. "They found opportunity in making money from natural disasters too. The size of their houses and cars have grown bigger. Local administration was being run from the Trinamul party offices,” he said.

The Prime Minister sounded confident of a clear majority for the BJP when the results are announced on May 2.

“Voters have paved the way for a thumping majority for us. People of Bengal always give priority to a stable government in the state, they vote to bring any party with clean majority and this time they have decided it is the BJP. We have already got a glimpse of what it is going to be on May 2 from the first two phases,” said Modi.

While it is true that  since 1977 governments in Bengal have got a clear majority but that was after the state had witnessed in the late 60s the uncertainties of a coalition which proved disastrous.

Modi said the Trinamul too was aware of its impending defeat and that is why Mamata was throwing tantrums.

"With every phase, Didi’s exasperation is increasing. She is abusing the Election Commission and the security personnel. In a cricket match if a player keeps pointing fingers at the umpire then it has to be understood that there is something amiss with the player’s game. Didi o Didi, you are staring at defeat,” Modi said.

Referring to the Trinamul slogan of “Khela hobe (Game on)", Modi said democracy and elections were not games. “The way to serve people, improve their lives is democracy. You forgot it, Didi,” he said.

Addressing another election campaign in South 24-Parganas Sonarpur, Modi said Bengal did not want the syndicate raj of Trinamul's goons.  "Whatever artisans make in Bengal, they have to pay extortion money. Even loans under central schemes are not spared," he said.