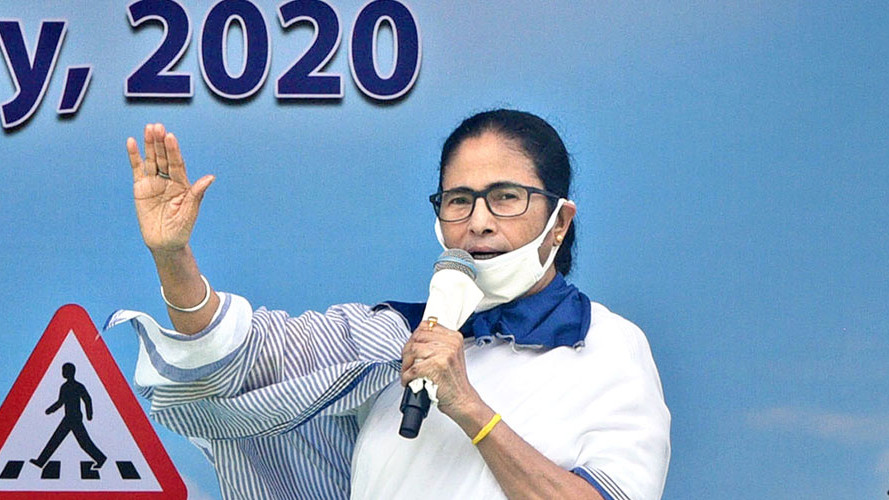 Mamata Banerjee put the pedal to the metal on Friday and used the occasion of the birth anniversaries of Mahatma Gandhi and Lal Bahadur Shastri to attack the BJP, albeit she did not name the party.

In an indication of her intent of persisting with the attack on the saffron camp over issues with pan-India resonance in the run-up to the perform-or-perish Assembly polls in the state, the Bengal chief minister broached the subject of farmers’ rights and freedom and democracy in her tributes to the icons.

“Homage to Mahatma Gandhi on his 151st birth anniversary. Icons like Gandhiji, Netaji, Tagore, Maulana Azad, Ambedkar & others tirelessly fought for freedom & democracy. Are we going to give it away so easily? Bapu’s philosophy has become more relevant now than ever before,” she tweeted.

The comment bore significance in the context of today’s political scene in the country as the BJP is accused by almost all Opposition parties of stifling democracy.

The alleged destruction of freedom and democracy in the BJP regime has been a leitmotif of the Trinamul Congress chief’s campaigns since 2016 and she has been — after a period of relative lull enforced by the Covid-19 pandemic and its problems — increasingly showing signs of intensifying her criticism of and opposition to the saffron camp.

“The India in the hands of the BJP is diametrically opposed to the India that the likes of Gandhiji, Netaji and Ambedkar had fought for. That is the message she tried to drive home,” said a Trinamul leader.

“In remembrance of Gandhiji’s philosophy of Ahimsa, today we also celebrate the International Day of Non-Violence. To this regard, #GoWB is setting up a university dedicated to Gandhiji in Purba Medinipur district. Let us spread Bapu’s message amongst the younger generations,” added Mamata on Twitter.

Sources in her party said Mamata was keen on renewing focus on the Father of the Nation and his inclusive humanism in a bid to counter the saffron camp and its propaganda machinery.

“She wants to use occasions such as Gandhi Jayanti to further remind people of the Mahatma’s views, especially on communal harmony and tolerance, to underscore the differences between his school of thought and that of the BJP,” said a leader.

In her tribute to Shastri — another Congress stalwart the saffron camp has been keen to appropriate — the chief minister addressed another key issue with pan-India resonance, that of farmers’ rights, in the wake of the passage of the controversial farm bills by the Narendra Modi government in Parliament last month.

“Remembering former Prime Minister Lal Bahadur Shastri on his birth anniversary. 55 years ago, he gave us the inspirational slogan of ‘Jai Jawan, Jai Kisan’ for our proud farmer brothers & sisters. Come what may, we will always firmly stand by them till our last breath,” she wrote on the microblogging site.

“Farmers are the backbone of our society. In Bengal, the average annual income of our farmers has tripled from ?91,000 in 2011 to ?2.91 lakh in 2018. History stands testament to what we have done for their benefits. We will continue to raise our voices for them,” she added.