Vessel was loaded with fly ash 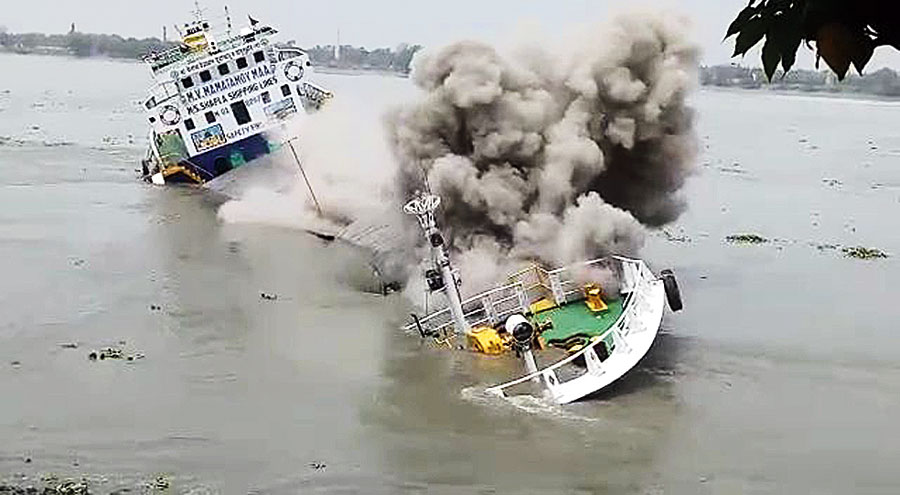 A Bangladeshi barge ferrying fly ash capsized in the Hooghly after colliding with an Indian port craft in Budge Budge, in South 24-Parganas, on Thursday morning.

Calcutta Port Trust officials said MV Mamatamoy Maa is believed to have breached the “shipping channel” — a channel in the river dredged for the movement of ships — and collided with the port craft, DV Rabindra.

The 13 crew members on board the barge got off the vessel on their own while it was drifting towards a bank of the river following the collision. “But the vessel again moved away from the bank because of high tide. Then it sank,” an official of the port trust said.

The port trust issued a statement saying DV Rabindra was proceeding for urgent buoy repairs in the shipping channel. “The port craft came in contact with barge Mamatamoy Maa loaded with fly ash proceeding to Bangladesh at Munikhali,” the statement said.

The port trust did not know the exact weight and dimensions of the barge till Thursday evening.

Sources said port trust chairman Vinit Kumar had ordered a probe. Officials said the barge would be lifted out of the water.

“Our intention is to keep the shipping channel free, so there is no accident. In this case, it would be the IWAI (Inland Waterways Authority of India) that will do the needful to remove the vessel,” a port trust official said.

Ship movement is not affected because the sunk boat is away from the shipping channel. IWAI officials Metro spoke to said they were yet to get “full details” about the incident. The course of action will be decided after the engineers know the details.