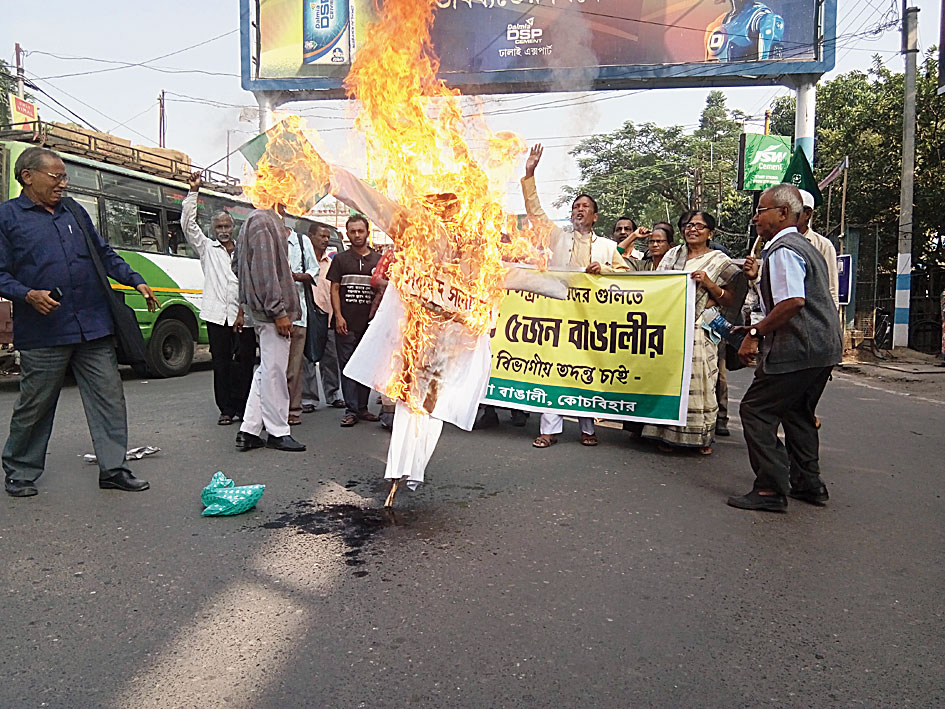 Amra Bangali on Wednesday threatened to call a strike in north Bengal to protest the killings of five Bengali-speaking people in Tinsukia district of Assam.

The apolitical Bengali organisation took out a protest rally in Cooch Behar town and also burned the effigy of Sonowal at Court More on Sunity Road.

Dalendranath Roy, the secretary of the north Bengal committee of Amra Bangali, said the killings had proved that the Bengali community in Assam was at threat, and both the Centre and the Assam government were conspiring to chase them out of the northeastern state.

“The Bengali community must stand united and protest such a ploy. Our state unit will be meeting in Calcutta on November 10 to decide our next course of action. We might even call a strike across north Bengal,” he said.

Roy said his organisation was against the National Register of Citizens (NRC) being implemented in Assam.

“In the name of the NRC, 40 lakh Bengali-speaking people have been branded as foreigners even though they have been residing in Assam for decades. We are against the NRC,” he asserted.

Amra Bangali had earlier locked Assam Bhavan here to protest the killings, and had also organised a “rail roko” against the implementation of the NRC.

Fourteen Bengali organisations in Assam had observed a 48-hour strike in the state to protest the Tinsukia killings.

Earlier this week, the All India Namasudra Bikash Parishad had called off its proposed blockade of NH-31C that links Bengal and Assam at the request of Bengal chief minister Mamata Banerjee.

The BJP, however, accused the Bengal chief minister of trying to disturb peace in Assam by “overreacting” to the killings.

“Insurgency groups were active in Assam, but after we came to power there is peace in the state. The persons involved in the incident have already been arrested. The

chief minister of Bengal is trying to destroy peace in Assam. She should concentrate on Bengal and she and her

party should not meddle in the affairs of Assam,” he