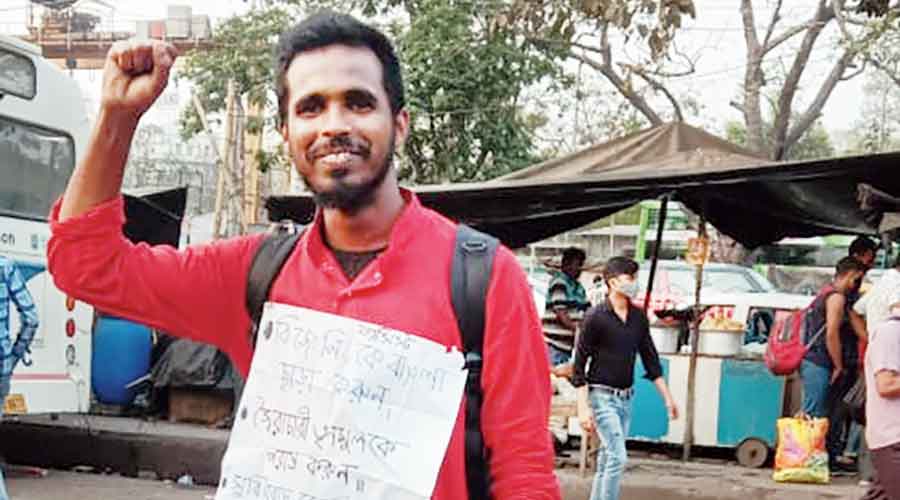 A team of three forensic experts conducted the second autopsy of student leader Anis Khan in the presence of a district judge at the SSKM Hospital in Calcutta within an hour of the exhumation of his body from a grave at Amta in Howrah district on Monday.

The post-mortem, which was videographed, will throw up several clues, including whether Anis’s body had hit any other object during the alleged collapse from a height, the type of injuries he had suffered and if his death was because of the fall or not, forensic experts said.

The second post-mortem was necessitated after Anis’s family members had expressed doubt about the manner in which the first one had been carried out allegedly in haste and without informing them.

Calcutta High Court had ordered the exhumation of the body on a petition filed by the special investigation team probing into the death.

Senior SIT officers said the report of the second post-mortem would help in concluding whether Anis had been forced to run before leaping from the terrace of his house or he had jumped on his own.

“If it appears the deceased had run few steps before jumping from the terrace, then we will try to find out what prompted him to run, presumably out of fear,” said a senior officer of the SIT, which the Bengal government has set up with a mandate to come up with a report within a fortnight.

Anis’s family members, who had opposed an earlier attempt to exhume the body on Saturday, gathered for a prayer around the grave behind his home at Amta on Monday morning before senior police officers took over the site in the presence of a district judge, health department officials and an imam.

Of hundreds of villagers who had gathered around the grave to witness the exhumation, some perched on trees raised slogans as the body was being taken out, covered with a bed sheet in the afternoon.

“Anis er roktyo/hobey nako byarthyo (The blood of Anis Khan/will not go to waste),” a section of the villagers shouted as the body was exhumed and placed in a police van before being taken to Calcutta.

After the post-mortem was over, some SIT sleuths gathered at Bhabani Bhavan and summoned several officers of the Amta police station, including the officer who was on duty on the night when Anis had died.

This was the second time when those officers were summoned for questioning. The immediate trigger was an allegation by two arrested — a civic volunteer and a home guard — that they had visited Anis’s house following orders from the officer-in-charge of the police station.