Alipurduar: One arrested with cannabis worth Rs 80 lakh 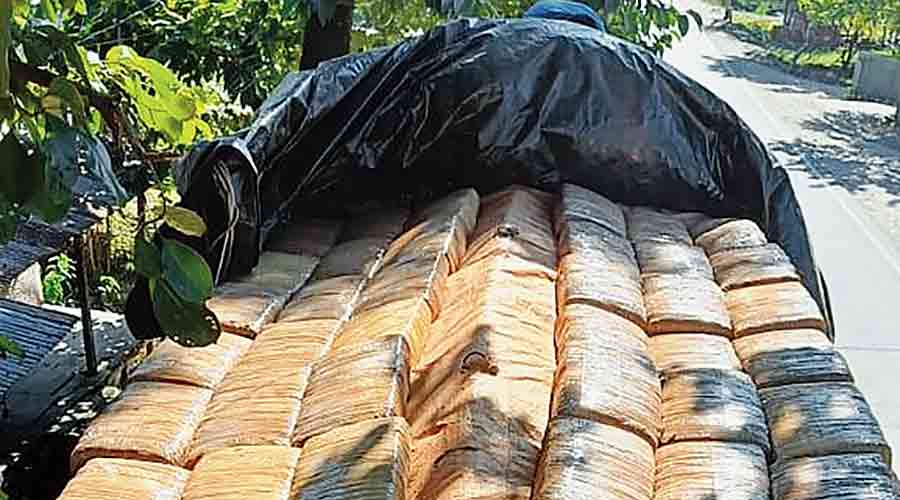 Police in Alipurduar intercepted a truck that entered Bengal from Assam on Thursday night and seized around 500 kilos of cannabis worth around Rs 80 lakh concealed inside the vehicle’s cabin.

Police also arrested Harjinder Singh, the truck’s owner who was also driving the vehicle. He hails from Kapurthala district of Punjab.

According to police sources, officers of Kumargram police station had prior information that an illegal consignment of cannabis was on its way from Assam in a truck.

Accordingly, as the truck reached the interstate border, policemen intercepted it.

“Our men searched the truck but initially found it empty. However, as they searched the cabin's roof, they found it loaded with packets of cannabis. Altogether, 50 packets, each containing 10 kilos of cannabis, have been seized. The cost of the seized items is around Rs 80 lakh,” said a police officer.

The detective department of Siliguri Metropolitan Police arrested three persons from Pradhannagar of Siliguri on Thursday night and seized an automatic pistol loaded with live ammunition from them.

Those arrested were Rakesh Chawla, a resident of East Vivekanandapally, Amit Sharma of Ashrampara and Mithun Barman of Champasari, various localities of Siliguri.

Troops of Border Security Force (BSF) posted in north Bengal arrested three alleged smugglers. Sources said in a joint operation with the police, the 61 battalion of BSF arrested Abas Ali Sekh, a suspected narcotics smuggler from South Dinajpur district, on Thursday, and recovered tablets and cough syrups worth over Rs 4 lakh from him. He was allegedly trying to smuggle those items to Bangladesh.

Also, BSF troops of the 15 battalion apprehended alleged Bangladeshi smuggler Kishore Kumar Roy hailing from Thakurgaon of Bangladesh while he was trying to cross the border on Thursday. Chanchal Sarkar from Panchagarh of the neighbouring country was nabbed by the 176 battalion of BSF on Friday while allegedly trying to smuggle cattle from India to Bangladesh.

All the three persons have been handed over to the police, BSF officers said.