A monsoon raga in rain-deficient Calcutta

The Calcutta Metro can rob the Calcuttan of the city 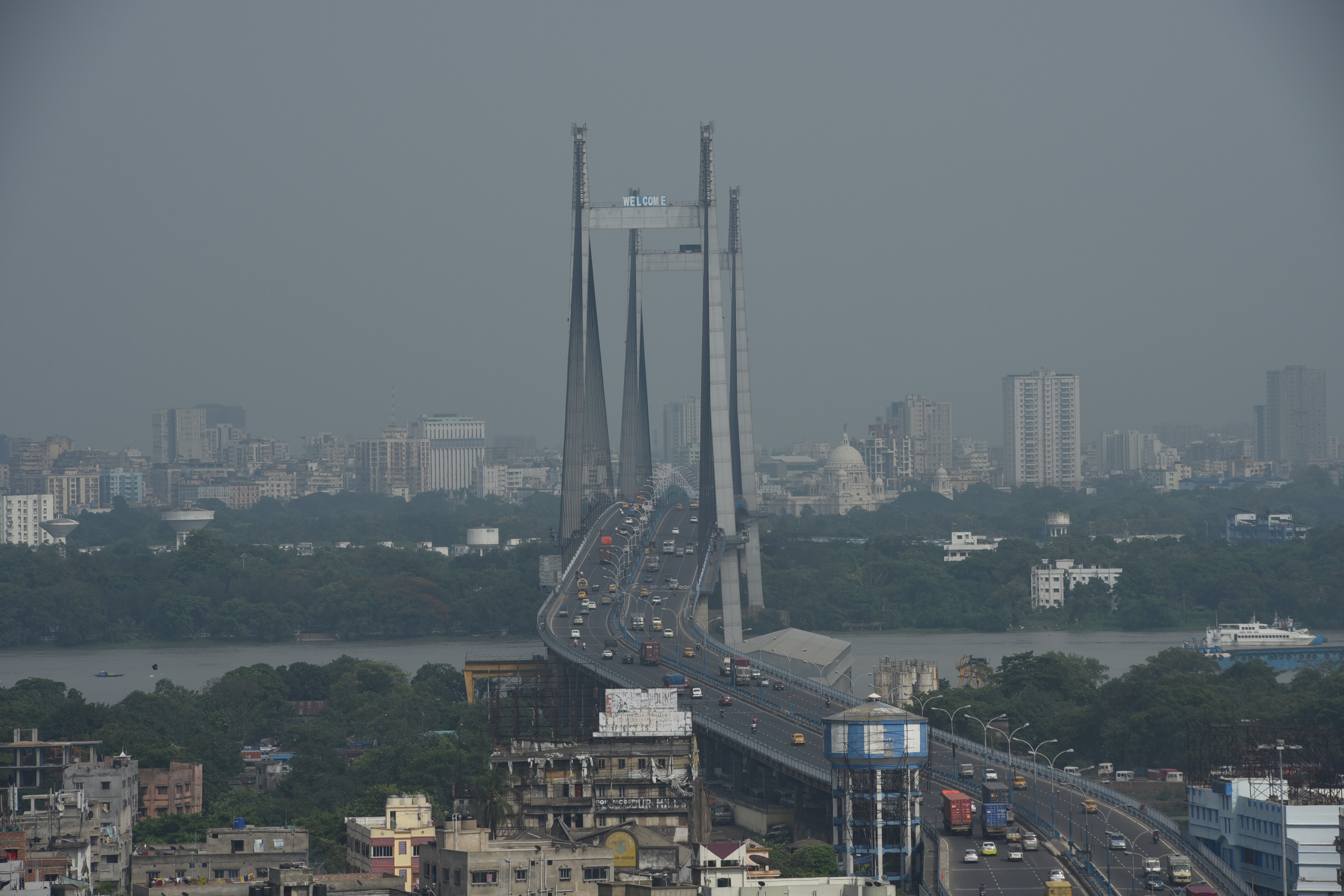 The Calcutta skyline with the Vidyasagar Setu in the foreground and the Victoria Memorial just beyond it, to the right
Amit Datta
Sudipta Bhattacharjee   |   Published 27.07.19, 08:24 PM

A monsoon raga is playing in rain-deficient Calcutta, the striking grey-white-azure chiaroscuro smeared in resplendent shades of green and ochre.

As a regular Metro commuter, I had missed out on the visual treat in previous years. This month, thanks to the Metro exit near our office being closed, I came overground and am revelling in nature’s rhapsody all along the route to our office.

The Eastern Metropolitan Bypass, the first thoroughfare on my drive to work, is green in patches, tastefully nurtured with gardens and installations. The terracotta pitcher near the Satyajit Ray Film and Television Institute is tilted at an artistic angle; the monkey perched on the elephant with a broken trunk closer to Ruby Hospital is eye-catching. Neat road signs proclaim that the bypass is now the Biswa Bangla Sarani.

Zipping across the 9.2km Ma flyover brings one to the new Trauma Centre in less than 10 minutes, something beyond the imagination of commuters on the “normal route”. Sailing across the initial span, the Science City domes give way to a picturesque waterbody, while on the right, the city skyline gains its concrete jungle character with a vengeance.

The AJC Bose Road section of the flyover is usually smooth-sailing, but can sometimes be clogged. On one such day, I found myself staring at a building alongside: it happened to be the school I grew up in, several years as a boarder. Only the top storey, housing the boarding wing and the infirmary was visible, inducing a flurry of recollections. After several attempts, I managed to click a photo. But little did I realise when I shared it with classmates that it would unleash a flood of memories. The dormitories, flanked by the prefects’ rooms, reminded them of our youthful escapades. One friend, who later became a teacher in the school, recalled how she had dragged the bed of a boarder to the verandah while the girl was asleep and smeared toothpaste all over her face. Another, a doctor in London, mentioned how the lights were put off at 8pm, forcing us to creep to the washroom, where a solitary bulb dangled, to study during examinations.

Yet another, a professor in Mumbai, reminisced how we were marooned during the “big flood” in 1978. While the dorms on the top floor were safe, the dining hall on the ground floor remained inaccessible. The army bailed us out with a truckload of stale bread to tide over three interminable days without water and electricity, with the little ones so traumatised they cried incessantly! But not for a minute did our martinet of a matron, Ms Russell (who never divulged her first name), mellow!

An installation close to Ruby Hospital in Calcutta
Sudipta Bhattacharjee

Past the campus, the façade of a hospital and a home for the aged materialise, with the spires of St. Paul’s Cathedral popping up between highrises.

But the most spectacular vision follows: a glimpse of the towering cables of Vidyasagar Setu and Victoria Memorial behind lush foliage with an enchanting array of cloudscapes as the backdrop. This stretch of the journey is like prising open a Chinese lantern; there are unexpected visual treats at every turn.

Once the flyover ends at the corner of the verdant racecourse, the route goes past the sprawling turf, offering more angles of the spectacular Vidyasagar Bridge across the Hooghly. From Hospital Road to Khidderpore Road, with Fort William to the left and the sylvan Maidan stretching for miles. A horse carriage ambling past or a solitary trundling tram adds to the idyll.

We whiz past the army’s neatly laid out Vijay Smarak, opened to the public two days ago (July 26), neat club tents and statues, to more congested parts as my destination approaches.

In this much-maligned (not without reason) city whose traffic snarls are legendary, I discovered a revolutionary connection: a road named after Marx and Engels sits cheek by jowl with one called Sidhu Kanhu Dahar (of the Hul revolution).

The Raj Bhavan, its sprawling gardens overshadowing the ones I’ve seen in other states, looks stately, what if its gate's a little off-colour, while the building adjoining Esplanade Mansion housing the ordnance unit of the defence ministry sports British era carvings.

In just 35 minutes, my destination arrives. Coming overground has its compensations!