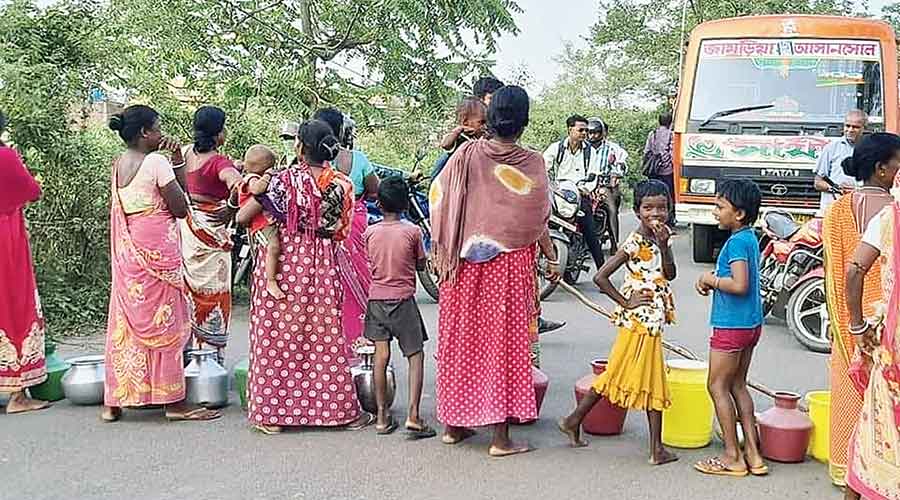 People block a road in Jamuria’s Akhalpur in West Burdwan on Friday to demand water
Sourced by The Telegraph
Abhijeet Chatterjee   |   Asansol   |   Published 10.10.21, 02:38 AM

Over 1 lakh residents of a dozen municipal areas and adjoining villages in West Burdwan’s Jamuria are grappling with severe water crisis for over a week now, because the water treatment plant in Raniganj’s Damalia developed a snag last week and could be partially repaired.

Sources said the plant got almost submerged when the region saw record rainfall of 434mm between September 28 and 29 and subsequent release of water from two DVC dams in Jharkhand.

The civic authority and public health engineering department are supplying water in tankers in Jamuria, which wasn’t enough, residents said.

People in Akhalpur and Chanda in Jamuria blocked a road connecting NH2 for over an hour on Friday demanding normal water supply. “We have to fetch water from  dirty sources far from home,” said Sukho Hansda of Akhalpur.

The situation in and around Raniganj town, which also get water from this plant, was as bad till Thursday. But water supply was partially restored here on Thursday after people led by former CPM MLA from Raniganj Runu Dutta blocked NH60 for hours.

Khursheed Ali Qadri, municipal commissioner of AMC, said that the plant had been “partially repaired” and claimed “there was no major complaint now”.

However, Manoj Dutta, a CPM district secretariat member and Jamuria resident, disagreed. “The administration is sending 1,000 tankers of water where at least one lakh people stay. People in eight municipal wards, as well as six gram panchayat areas, are suffering.”

SFI leader Aishe Ghosh on Saturday posted pictures of the people’s protest in Jamuria on her Facebook wall. She slammed the government for not doing enough to resolve the water crisis.

Trinamul MLA from Jamuria Hareram Singh said: “It is a combined impact of heavy rain and DVC’s conspiracy… However, the situation has improved now…. The CPM need not worry.”