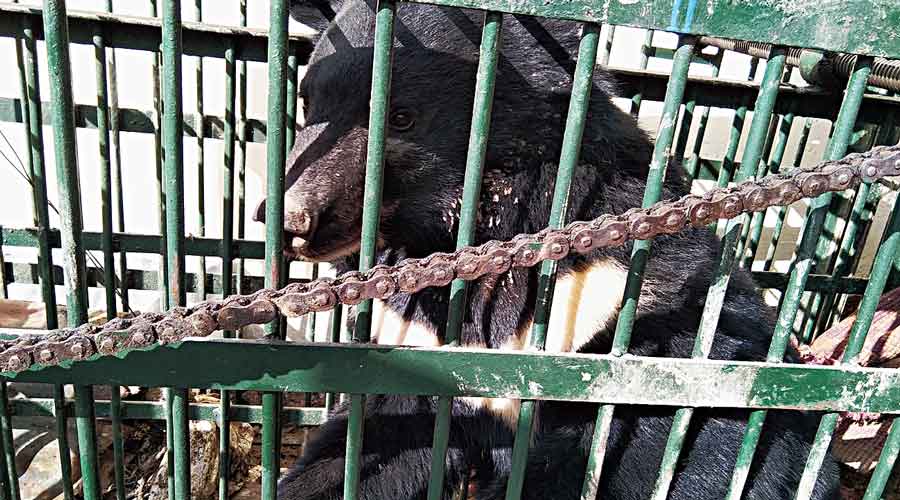 There has been an unprecedented rise in the incidents of the Himalayan black bear entering human habitats in East district of Sikkim and Kalimpong district in Bengal with about 15 such cases each reported from the two districts in the past one month.

The latest incident happened on Tuesday when a bear was rescued from the Hanuman Tok area in Gangtok. Another bear had been rescued from the same area on Monday. “This is the fourth consecutive day of us rescuing bears. The other two bears were rescued from a place called Point 222 near the Pangolakha Wildlife Sanctuary,” Dechen Lachungpa, divisional forest officer (DFO), East Wildlife Division, told The Telegraph.

The forest officer said in the past one month, bears had been rescued from human-inhabited areas almost every alternate day.

The story is the same in the adjoining Kalimpong district in Bengal where more than 15 bears have been spotted in human habitats in the past one month. “More than 15 such incidents occurred in the past one month. These incidents have stretched from Lava to Jholung and include places like Gorubathan, Samsing and Lolaygaon,” said Chitrak Bhattacharya, DFO, Kalimpong Wildlife Division.

The villages mentioned by Bhattacharya are on the fringes of the Neora Valley National Park in Kalimpong which is contiguous to the Pangolakha Wildlife Sanctuary in Sikkim. In both East Sikkim and Kalimpong, there has only been one incident each of bear attacks on human. The victims escaped with injuries.

Experts said there were multiple reasons for the spurt in the incidents of the bears entering human settlements, including destruction of their habitats, loss of forests thereby resulting in less availability of food, random dumping of food wastes in the fringes of forests and even unexplained spurt in the population of bears.

“It is very difficult to say. We neither have any baseline nor any study has been done. There could be multiple factors. A proper study needs to be done to understand this,” said Priyadarshinee Shrestha, team leader, WWF-India Khangchendzonga Landscape, Gangtok.

The Kalimpong DFO echoed her when he said his department was still trying to figure out why there had been such a rise in bear encroachment on human settlements.

A veteran forester who worked in the hills and the plains of north Bengal has said one of the main reasons is that the food habit of the bears is getting disturbed by human interference.

“Throughout Eastern Himalayas fruits like lapche kawlow (Machilusedulis), katus/arkaula (Quercus spp.) are collected by the local populace and sold at local markets. Human interference is leaving the Himalayan black bears with less food before its hibernating period,” the forester said, requesting anonymity.

This, he said, has drastically reduced the hibernating period of the bears from about four months to less than a month. “The bears used to hibernate for nearly 120 plus days; from the onset of winter to the beginning of spring, but this is not happening now as the required diet for such an activity is set off balance by human interference,” he said.

Furthermore, he said, the bears are considered to be the gardeners of the forests as their digestive tracts are poor so the seeds of fruits that are disposed in stools are responsible for natural germination of endemic middle hill Himalayan species.

“In the last 10 to 15 years, the endemic species like Machilusedulis, Quercusspp, Castonopsis spp. has virtually no natural germination in the wild,” he added.

The forester advocated a ban on selling of wild fruits in local markets as a step to preserving both the Himalayan black bears and the local endemic fruit-bearing species.