While Classes from IX to XII resumed in full capacity, colleges, universities, coaching centres and hostels reopened at 50 per cent of their capacities 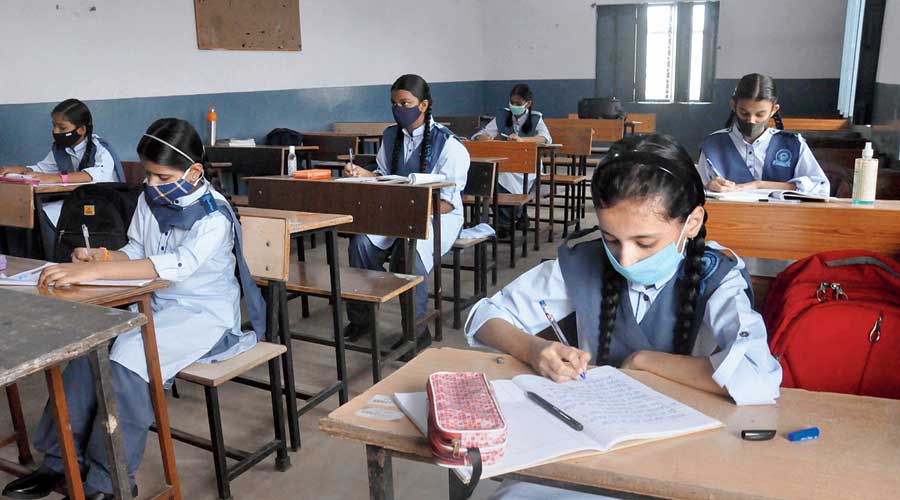 All senior schools, colleges and universities in Sikkim reopened on Monday after a gap of almost five months because of the second wave of Covid-19.

While Classes from IX to XII resumed in full capacity, colleges, universities, coaching centres and hostels reopened at 50 per cent of their capacities. However, offline classes would continue to remain shut from LKG to Class VIII.

“I am really happy today that the school has reopened. Because of Covid, we were not able to come to school. It was not good staying at home all this time,” Jasmin Khatun, a Class IX student of Government Senior Secondary School at Deorali in Gangtok.

A teacher of the same school said there was a difference between conducting online and offline classes and she missed the physical interaction that happens in classrooms. “I found offline classes better in order to guide and counsel our students as teachers,” said Leela Sharma, a post-graduate teacher.

Over 850 ad hoc school teachers, however, continued to remain off schools and are on an agitation path with five of them on an indefinite hunger strike at the District Administrative Centre in Gangtok since Friday, demanding fresh round of interview within this month or extension of their existing contracts in order for them to continue in their jobs.

The government reiterated that all eligible teachers could sit for walk-in interviews that would be conducted by the Sikkim State Teachers Recruitment Board in a phase-wise manner beginning October 3 and, once selected, their jobs would be regularised on completion of eight years.

“My appeal is that they (the teachers) look at their future and call off their strike…,” said Lepcha at the end of a long-winding explanation by him and his team on the reasons for holding fresh interviews and the time it was taking.

The teachers, who had been holding intermittent protests since June, however, said they were very disheartened by the explanations offered by the education department officials. “They said we are being misguided. No, we are not. It is they who are trying to misguide the people of Sikkim,” said Yojna Rai, one of the teachers.