Spicejet to connect Sikkim with Delhi 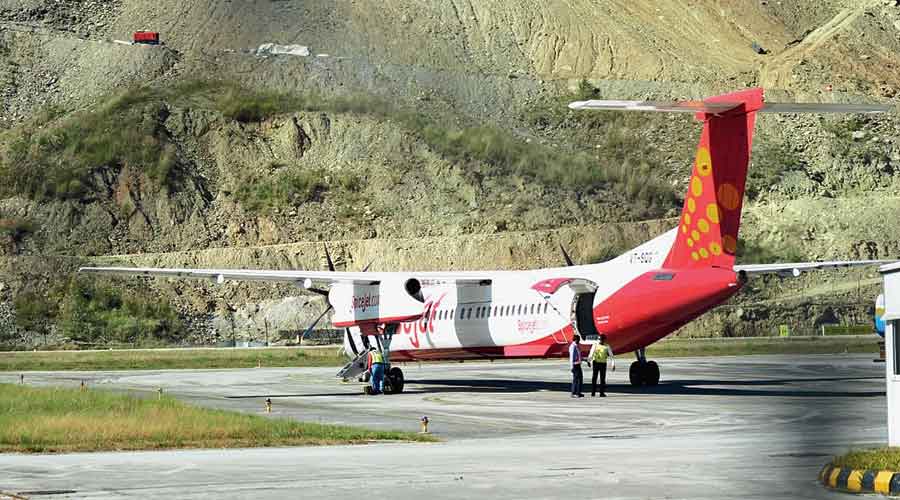 Passenger flights to Pakyong Airport in Sikkim would resume with a SpiceJet plane from Delhi scheduled to touch down at the state’s lone airport around noon on Saturday, almost 20 months after all commercial operations had been suspended because of various reasons.

This will be the first commercial flight between Delhi and Pakyong, which is about 35km from Gangtok.

Earlier, SpiceJet used to operate flights between Pakyong and Calcutta and Pakyong and Guwahati. The Calcutta-Pakyong-Calcutta flights are also expected to resume on February 1.

Pakyong’s first commercial flight operations began on October 4, 2018, putting the Himalayan state on the aviation map of the country. However, operations were suspended from June 2019 onwards because of unpredictable weather, poor visibility and lack of proper landing facility, among others.

The green field airport, which was built under the Centre’s regional connectivity scheme, UDAN, was inaugurated by Prime Minister Narendra Modi in September 2018.

The air services between Delhi and Pakyong would be operated by Bombardier 400 aircraft. The airline had operated Bombardier 400 for its earlier services to and from Pakyong as well. “Our exclusive flights from Delhi to Pakyong (Gangtok) will cater for the growing demand for leisure travellers and backpackers who wanted to visit this beautiful state in the foothills of the Himalayas,” Ajay Singh, the SpiceJet chairman and managing director, had said earlier while announcing the launch of the service.

The budget carrier had also announced an introductory promotional fare starting at Rs 4,310 on Delhi-Pakyong and Pakyong-Delhi routes.

“The introduction of Delhi-Pakyong flight was one of the major demands of the operator because it will gain significant business. As you know, people from here have to go to Delhi for various works,” said Kapil Meena, the director-cum-additional secretary of Sikkim tourism and civil aviation department.

However, the ongoing expansion work on the road from Pakyong to Ranipul, 12km short of Gangtok, could deter many from taking the flights from the airport.

Meena said it would take at least about a year for the National Highways and Infrastructure Development Corporation Limited (NHIDCL) to complete the road expansion work.

The Sikkim government has decided to open the Rammam check-post between Jorethang in South Sikkim and Darjeeling in Bengal for entry of foreign tourists from March 1 to boost tourism in South and West districts of the Himalayan state.

Hitherto, foreign tourists visiting Darjeeling and interested in travelling to Sikkim had to take a longish route to either Melli in South Sikkim and Rangpo in East Sikkim for entry.