Bengal vandalism: What Shah said on Vidyasagar bust and what videos show

The BJP president showed three pictures in support of his claim, pointing out mainly that a gate was intact 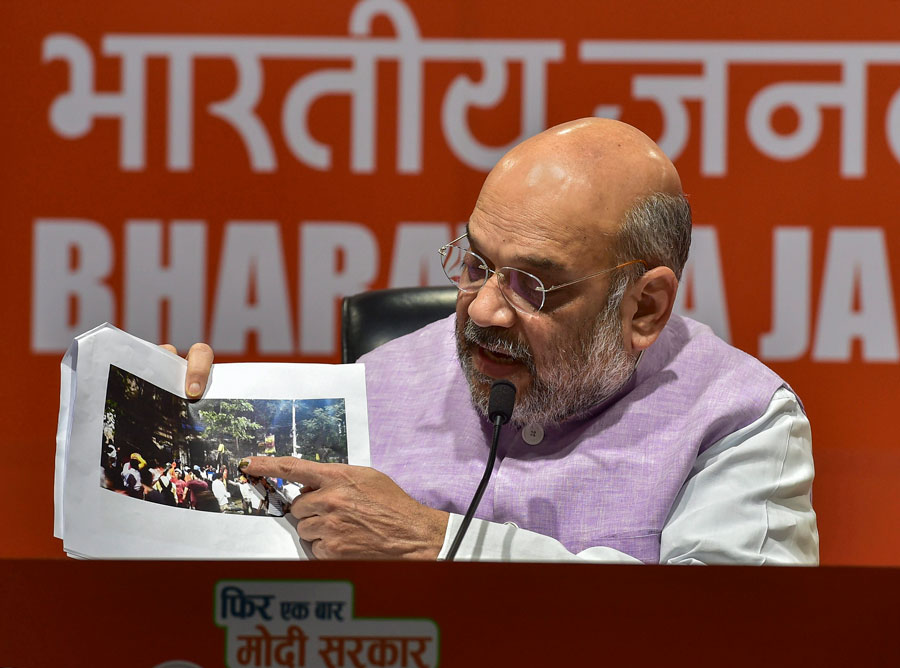 BJP president Amit Shah told a news conference in Delhi that his party workers had been outside the gates of Vidyasagar College and did not vandalise a bust of Ishwarchandra Vidyasagar. Shah showed three pictures in support of his claim, pointing out mainly that a gate was intact.

Soon, two video clips emerged, one 7.21-minute-long and the other 2.45 minutes. The following is a comparison of what the video clips show and what Shah said. Excerpts from the account of a guard at the college have also been included.

Shah: Trinamul is alleging that Ishwarchandra Vidyasagarji’s bust was broken. You can see, this is a picture after the riots (holding a printout of a picture) where the gate is intact. We were outside, on the road. If the gate was intact, who went inside and broke (the bust)?

Video/guard: The longer video shot from a building opposite Vidyasagar College shows some men pull away from the rally and run towards the gate of the college. Several of them are in saffron clothes and some have saffron turbans with long tails.

They land heavy blows with sticks on the gate. The gate gives way, probably because the lock is broken, and the crowd pours in. This is why the gate was “intact”, as Shah said, but the vandals could still enter the college premises and storm the room where the bust was kept.

Separately, Shantiranjan Mohanty, the college security guard, told The Telegraph that the locks on the iron chains with which the two gates were secured had been broken on Tuesday and had to be replaced on Wednesday.

In the video, from the time the men are able to enter the courtyard till the end, the loud sounds of repeated blows on objects are heard. A male voice, apparently belonging to someone at the place from where the attack was filmed, is heard saying: “They (the attackers) will be in trouble. They are going inside and vandalising the college.”

Shah: If the gate was not broken, who broke the statue of Ishwarchandra Vidyasagar that was inside the college? Mamata Banerjee’s workers broke the statue to gain false sympathy. They are staging a drama and a conspiracy.

Video/guard: The shorter video shows two men come out through a door at the college that leads to the courtyard. They are carrying a heavy, white object that resembles the bust of Vidyasagar. One of the men is wearing a white T-shirt and a turban while the other man has a dark, unbuttoned shirt over a T-shirt.

They hurl the large white object to the floor. More men, some in saffron clothes, are seen to join in from the direction of the gate. They pick up fragments of the bust and hurl them again to the floor.

The courtyard is now filled with many people in saffron clothes. A man in a saffron T-shirt speaks to the man in the unbuttoned shirt, who steps back inside the college building and returns after a few seconds with a chair.

The man in the unbuttoned shirt hurls the chair to the floor repeatedly, trying to break it. The lights of the room inside are switched off. The video ends.

Shah: This is the picture (again holds up a picture) of the place where Vidyasagar’s statue was kept. These are two rooms inside. The bust was not kept outside in public view. My question is: this happened at 7.30pm, the college was shut, everything was locked, then who opened this room? The locks were not broken, either. How would BJP workers have got the keys? They were on the road. All evidence suggests that the statue was broken by TMC goons.

Website/video/guard: The portion of the institution that was attacked houses the day college but is connected to the evening college through a gate. The website of the Vidyasagar Evening College shows the college hours as 2.15pm to 8.15pm. A senior teacher of Vidyasagar College said many students and teachers of the evening college access their building through the portion on Bidhan Sarani that was attacked on Tuesday. The evening college has a separate building but the two premises are connected through a gate, and the students and teachers can enter both premises at least till 9pm, sources said.

The longer video shows that the main gate was forced open, after which the attackers flooded the campus.

Two wooden doors and a collapsible gate lead into the building. In the shorter video, the two men carrying the bust are seen coming out through one of the doors. A visit to the campus on Wednesday showed that both the doors had been broken during the attack.

The Vidyasagar bust was not two rooms away but in the first room into which a smashed door opened.