Advertisement
Home / Sports / We are not rivals, we are part of javelin family: Nadeem on friendship with Chopra

We are not rivals, we are part of javelin family: Nadeem on friendship with Chopra 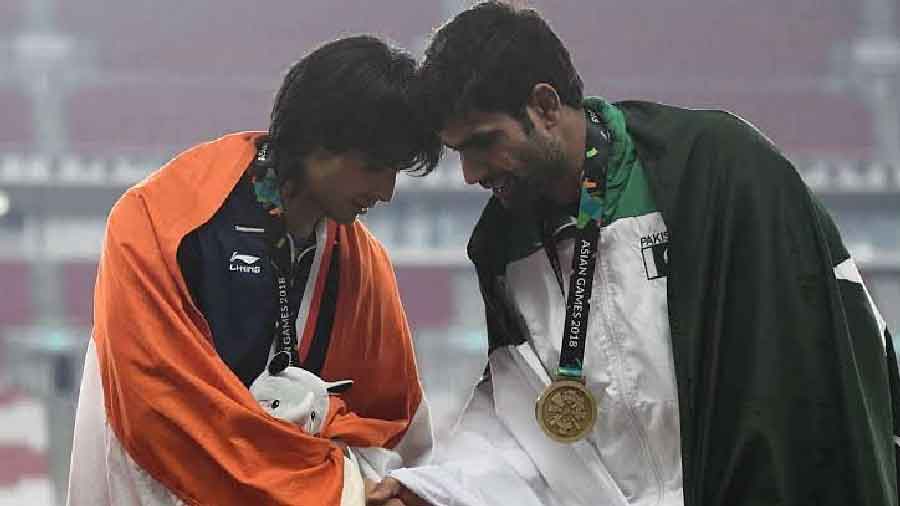 Pakistan javelin thrower Arshad Nadeem says he will miss competing against India's Olympic champion Neeraj Chopra at the Commonwealth Games here as they are part of 'one' family.

Neeraj won a historic silver at the World Championships last month with a throw of 88.13m as Arshad finished fifth after becoming the first Pakistani to qualify for the finals.

The Indian pulled out of the CWG due to a groin strain while Arshad, who continues to nurse an elbow injury, is expected to be on the podium with Grenada's Anderson Peters, the favourite for gold. Peters won the gold at recent Worlds.

"Neeraj bhai is my brother. I miss him here. May God give him the best of health and I get to compete with him soon," Arshad told PTI.

The 'bromance' has been brewing between Indo-Pak rivals ever since they took part in the South Asian Games in 2016 in Guwahati.

Four years ago, when Neeraj won the gold and Arshad got bronze at the Asian Games, the Indian had not warmed up to the Pakistani athlete fully but it is not the case anymore.

"He is a good person. Initially you tend to be a bit reserve. When you get to know each other, you tend to open up.

"We have a very good friendship. I hope he keeps performing for India and I keep performing for my country. We both have made an impact. We are like one family," said the 25-year-old.

The fifth place finish at Worlds was a creditable finish for Arshad who made a comeback from injury after the 2020 Tokyo Olympics. He is still carrying the same elbow injury.

"After Tokyo Olympics, I participated in the Worlds after a long gap, I am feeling good about my game. I have an elbow injury and getting treated for it."

"The way coaches are seeing and the way I feel about my game, I have set myself a target of 95m," said Arshad sounding rather optimistic"

Neeraj's gold at the Olympics captured the imagination of the entire nation and made him an overnight star. Arshad has a long way to go but says he too is getting a lot of support from his government.

"The way Neeraj bhai has got a lot of fame in your country, I have got a lot of support from my government and the people. I am really grateful for that," said Arshad who hopes to compete in India again soon.