Twists & turns of a famous win 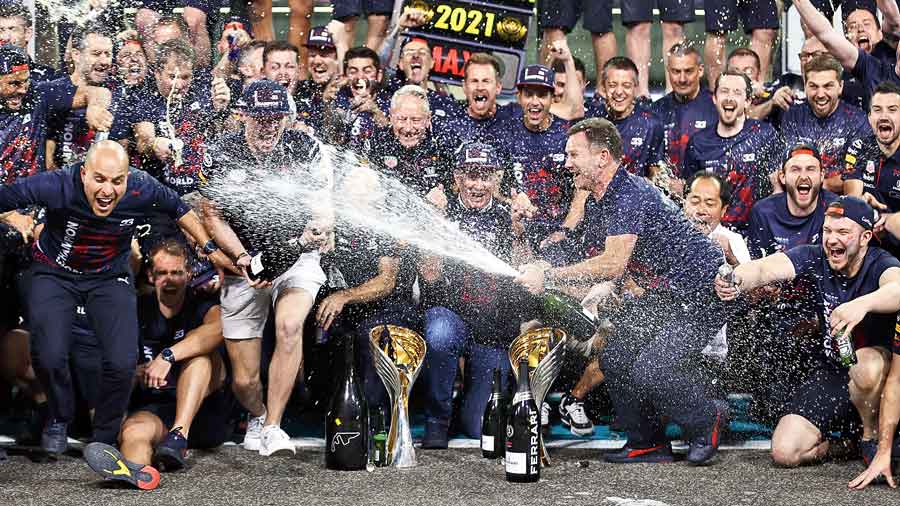 Red Bull’s F1 champion Max Verstappen celebrates with his team after the Abu Dhabi Grand Prix at the Yas Marina Circuit on Sunday.
Getty Images
The Telegraph   |   Published 14.12.21, 02:50 AM

The jury remains out on the result of the season-ending Abu Dhabi Grand Prix which Dutchman Max Verstappen of Red Bull won in the most epic of endings after the most spectacular and bewildering of late plot twists.

Mercedes’ Lewis Hamilton led the race for nearly 300 kilometres. Comfortably ahead. Fastest car. But an unfortunate crash involving Williams’ Nicholas Latifi meant the entire drivers’ championship would be a 5.5km, one-lap, big-thrills shot at glory instead. The Telegraph answers some key questions on the scintillating finale and the controversy it has triggered

Hamilton until then had had an excellent race and was leading by around 15 seconds as the Grand Prix neared its conclusion. When Latifi crashed out under the circuit hotel with just five laps to go, the race stewards — equivalent of football referees — decided to deploy the safety car to neutralise the race.

Safety cars are brought out to allow the marshals a safe gap on track to remove stricken vehicles — in this case, Latifi’s Williams.

Before the crash, Hamilton was coasting to an eighth world title. When the safety car is brought out, all the cars on track are bunched up, forced to cut speed and drive at a slower pace behind it. The safety car has long been an accepted part of F1 and when it comes out it wipes out any lead that the front car had (in this case Hamilton’s 15- second lead over Verstappen).

The issue was that the time taken to clear away Latifi’s Williams car meant that the F1 directors had run out of laps (Abu Dhabi had 58 laps) to get the race restarted — as race director Michael Masi explained to Red Bull boss Christian Horner during the race. Hamilton and Verstappen had also both lapped — meaning they were a lap ahead of — several cars, and there were five cars between them on track when the field fully bunched up behind the safety car.

Because all the cars on track are driving to a slow pace, a safety car period is an opportune time to make a pitstop, as one will lose less time driving under the pitlane speed limit.  Verstappen’s Red Bull team gambled on pitting for the soft new tyres while Hamilton and Mercedes decided to prioritise track position and stay out on his worn hard tyres. The new tyres gave Red Bull the best chance of making a pass on track.

Mercedes’ main quarrel was the timing of the safety car. They argued that as per regulations, it should come in one lap after all the lapped cars have unlapped themselves, which would have been at the end of the final lap of the race, giving Hamilton victory. Ultimately the decision came down to race director Masi, and during the appeal it was given to race stewards. They decided to throw out the protest.

Usually, before racing resumes after a crash, race control allows lapped cars — cars that are a lap down to the leaders — to un-lap themselves by overtaking the safety car and join the queue behind. When it goes smoothly it means all cars end up in a tight order that can follow the safety car, and ensure officials have time and space to clean up the affected area.

However, the core concern for Mercedes is the interpretation of when cars are allowed to un-lap when a safety car has been called.

Lando Norris, Fernando Alonso, Esteban Ocon, Charles Leclerc and Sebastian Vettel were all between Verstappen and Hamilton. They were all granted permission to pass the safety car, yet other lapped cars (Daniel Ricciardo, Lance Stroll and Mick Schumacher) were not.

There is a loop in the regulations which allows the stewards to instruct those lapped drivers to overtake and race on ahead as the safety car period is coming to an end, in an effort to get drivers back to the correct on-track position. Initially, the race stewards opted not to allow the lapped cars to overtake. This decision was likely taken due to the sheer amount of drivers who had been lapped — Hamilton had lapped a few drivers in the top ten. Though this would have led to the race restarting earlier, it would have left Verstappen with a big gap to Hamilton on the restart. Ultimately, the stewards made a last-minute decision to allow some of the lapped cars to overtake. The drivers who were between Hamilton in first and Verstappen in second were allowed to un-lap themselves, and the race was set to restart at the end of lap 57 of 58.

Mercedes also appealed against the possibility of Verstappen overtaking Hamilton during the safety car. The supposed “incident” occurred when Hamilton slowed down and Verstappen’s front wing moved ahead of the Briton for a split second. Eventually the stewards ruled that no rules had been breached.