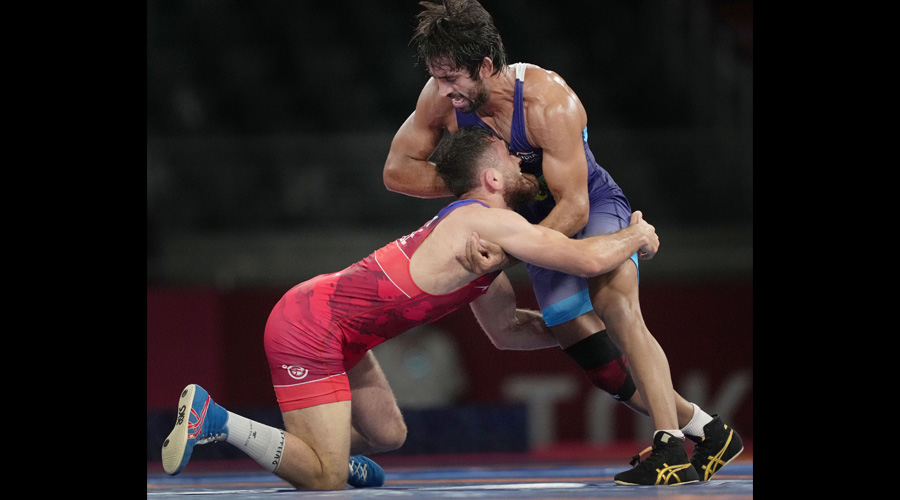 Bajrang Punia reached Tokyo with the burden of expectations of a nation on his shoulders. The latest poster-boy of Indian wrestling, ranked No. 2 in the world, was expected to bring home a medal.

He may still do that when he plays for the bronze on Saturday, but the hopes of a one of a much brighter hue disappeared on Friday afternoon at the Makuhari Messe Hall in Chiba, when he lost the men’s freestyle 65kg semi-final to three-time world champion Haji Aliyev of Azerbaijan 5-12.

Seeded second in Tokyo 2020, Bajrang had advanced to the semi-finals after edging past Kyrgyzstan’s Ernazar Akmataliev and then winning a “victory by fall” by pinning Iran’s Morteza Ghiasi.

A troublesome right knee, which Bajrang had injured in June during a tournament in the Russian city of Kaspiysk, plagued him throughout the day and in the semi-final, an experienced Aliyev was quick to identify the weakness and kept attacking it.

Both wrestlers started the bout on a cautious note with Bajrang earning the first point when a passive Aliyev was put on the 30-second shot clock and failed to score a point.

But that is about all the allowance he made. He kept adding to his points, and at one point had taken 8-1 lead following a spectacular ankle lace. Bajrang tried to fight back, winning a two pointer next by forcing his opponent on the mat, chest down.

By then, however, it was evident that Aliyev was in control and Bajrang was lucky to have avoided being pinned.

Leading 9-5, Aliyev earned another two-pointer which was challenged by the Indian camp in the dying seconds. But sadly for Bajrang, he lost the challenge, and the Azerbaijani added one more for good measure to win 12-5.

Earlier in the morning, a single takedown, worth two points, helped Bajrang win against Akmataliev in a match with a 3-3 scoreline.

But he did look in better form against Ghiasi. He was defensive at the start, and even lost the 30-second passivity point to the Iranian. But Ghiasi failed to add to that. And in the second half the man from Khudan village in Haryana’s Jhajjar district not only earned a two pointer for a takedown, but with a sudden attack that took Ghiasi completely by surprise was able to pin him, winning the bout.

Seema Bisla could not find a way to get out of the defensive trap of Tunisia’s Sarra Hamdi and lost her 50kg opening round 1-3. The 27-year-old could not make her moves as Hamdi applied the body lock to great effect.

There were hardly any exciting moments in the bout with Hamdi getting two of her three points on push out and one on Seema’s passivity. Seema too earned her lone point when she pushed her rival out of the mat. Hamdi lost her next bout to Mariya Stadnik of Azerbaijan, putting as end to the Rohtak grappler’s hopes of making the repechage round.

With inputs from agencies