The 29-year-old outsprinted a field that included Shelly-Ann Fraser-Pryce, a two-time former champion 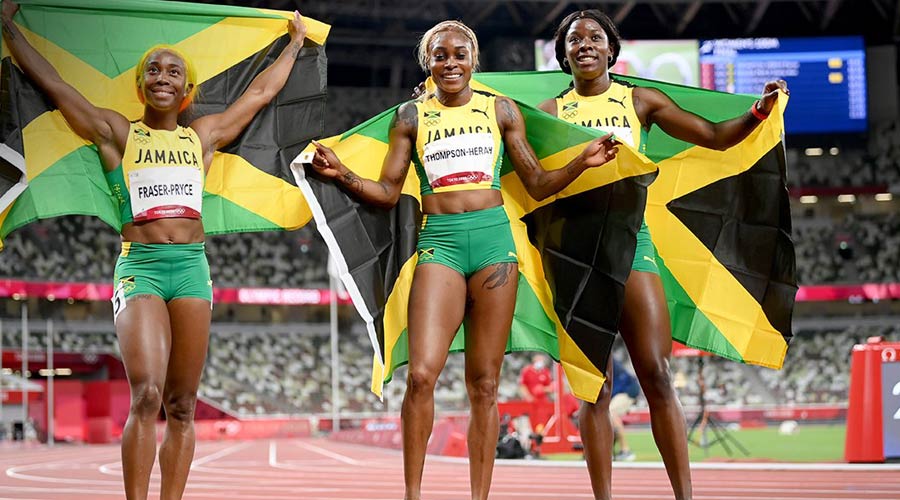 The 29-year-old outsprinted a field that included Shelly-Ann Fraser-Pryce, a two-time former champion.

Thompson-Herah’s Olympic record time has been beaten only by Florence Griffith-Joyner’s 1988 world record of 10.49 — though the American also ran a 10.61.

The Jamaican, however, beat FloJo’s Olympic record of 10.62, set at the 1988 Seoul Games, by a hundredth of a second.

It was an all-Jamaica show on Saturday: Fraser-Pryce took silver in 10.74, and Shericka Jackson won bronze.

Fraser-Pryce, 34, had been seeking her third Olympic gold in the event after winning back-to-back titles at the 2008 and 2012 Olympic Games. She won bronze in the 100m at the Rio Olympics in 2016, finishing behind Thompson-Herah and the US’ Tori Bowie.

On Saturday, Thompson-Herah edged ahead of Fraser-Pryce about halfway down the track and held her off, triumphantly raising her left arm as she crossed the finish line. She then fell to the track in apparent disbelief.

“I knew I had it in me (Olympic record) but obviously I’ve had my ups and downs with injuries,” Thompson-Herah said. “I’ve been keeping faith all this time. It is amazing.

“I think I could’ve gone faster if I wasn’t pointing and celebrating early. I wanted to show that there is more in store, so hopefully one day I can unleash that.”

The organisers added to the mood of the evening by switching off the lights and lighting up the 100m stretch of the track before introducing the eight sprinters.

Six of them finished under 11 seconds in a blistering race.

The women’s 100m final was preceded by the first mixed-gender 4x400 relay in Olympic history. In a stunner, Poland won gold in a tight finish with the Dominican Republic in second, and the US in third.

And in the first-round heats of the men’s 100m dash, all three Americans — Trayvon Bromell, Fred Kerley and Ronnie Baker — made it through to the semi-finals, though Bromell, one of the favourites to win gold, laboured to a fourth-place in his heat and advanced based only on his time.

Written with inputs from NYTNS and Reuters