Earlier, the Jharkhand archer beat Bhutan's Bhu Karma in the round of 32 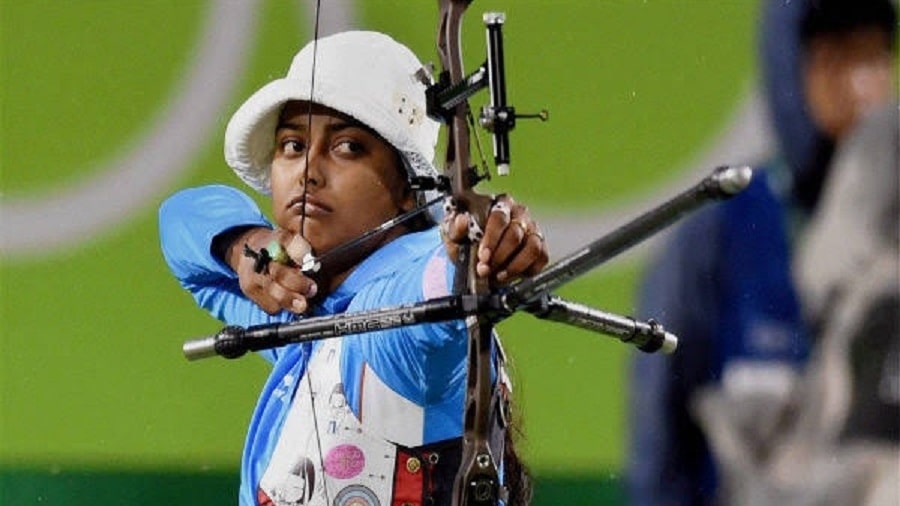 World number one archer Deepika Kumari survived some anxious moments before getting past US teenager Jennifer Mucino-Fernandez 6-4 to sail into the pre-quarterfinals of the women's individual section and keep Indian medal hopes alive at the Tokyo Olympics on Wednesday.

On a day her teammates Tarundeep Rai and Pravin Jadhav made second round exits, Deepika seemed to feel the pressure initially as she started off hitting the red-zone, capping a poor seven at the floodlit Yumenoshima Park.

Deepika lost the first set by one point but she bounced back strongly with three 10s in a row to take a 4-2 lead. She, however, failed to wrap up the match in the fourth set as she misfired a six in her second arrow.

The 18-year-old American made it 4-4, winning the set by one-point (25-24). In the winner-takes-all fifth set, Deepika had two 9s to start with before finishing with a poor 8.

Needing a 10 in her last arrow to force a shoot-off, Jennifer signed off with a nine in what was a promising campaign for the American teenager.

Deepika's husband Atanu Das is the only other Indian left in the fray. The India No 1, who slipped to 35th place in the ranking, begins his campaign against Deng Yu-Cheng of Chinese Taipei in his opening round of 64 match on Thursday.

Earlier, Deepika sailed into the second round with a facile 6-0 win over lower-ranked Karma of Bhutan in her opening match.

World number 193 Karma, the flag bearer of Bhutan -- a country where archery is national sport -- during the opening ceremony, had poor scores of 23, 23 and 24 in the third set where she managed a 10.

The Indian also had a slow start, scoring 26 each in the first two sets, before she picked up with a 27 to seal her last-32 berth.

Olympic debutant Jadhav knocked out world number 2 Galsan Bazarzhapov in his opening match only to suffer a heavy defeat to world champion Brady Ellison in the second round.

The 25-year-old was at his best in his first round match, beating Bazarzhapov of Russian Olympic Committee in straight sets. But, he could not continue his impressive form and succumbed to Ellison, the American world number one in his next match.

Ellison too was ordinary, especially in the second and third sets where he misfired in the red rings with two 8s, but Jadhav was miserable and hit two 7s and 8s in four arrows to join his senior Army colleague Tarundeep Rai in making a second round exit.

Rai too had made a second round exit, going down to Itay Shanny of Israel in a tight shoot-off finish for a heartbreaking exit in his swansong Olympics.

Jadhav, who was the best Indian with a 31st place in the ranking round, had raised expectations for the misfiring Indian archers as he dropped just one point to win the first set en route to a stunning 6-0 win against Bazarzhapov under windy conditions at the Yumenoshima Park here.

Fresh from winning the title at the Final Qualifier for Tokyo Games in Paris last month, Bazarzhapov drilled in two 10s in the next set. But the wind got the better of him as he misfired his next three arrows (7-8-7), while Jadhav remained unfazed and hit consistently in the 9-10 rings to seal the match.

A repeat of his first round scores of 29-28-27 would have been enough in the tricky second round clash against Ellison who had a sequence of 28-27-26. But the inexperienced Jadhav looked completely out of sorts and shot 27-26-23 that snuffed out any little chance he had for advancing in the second round.

Earlier, Rai lost to Itay Shanny of Israel in a tight shoot-off finish for a heartbreaking second round exit in his last Olympics.

Both the players were locked 5-5 but Shanny, who is 15 years younger to Rai, sealed the match 10-9 with a perfect score in the shoot-off.

The world number 92 Israeli, who had knocked out Japanese team event bronze medallist Muto Hiroki in the first round, was superior to the Indian at the death as he shot three 10s from the final four arrows to sail into the pre-quarterfinals.

This was the second successive round two exit for three-time Olympian Rai who had made his Games debut at Athens 2004. In 2012 London Olympics too, Rai had lost in the second round.

The 37-year-old Army man, who had a thrilling come-from-behind 6-4 win over Oleksii Hunbin of Ukraine in the first round, once again showed remarkable poise as he bounced back to lead 5-3 from a 0-2 deficit.

Needing a tie in the fifth set to move into last-16, Rai faltered and Shanny won the set by two points, drilling in two 10s and a nine, as against the Indian's sequence of 9-8-9.

A perfect 10 kept eluded Rai and the world number 54 started the proceedings in the shoot-off with a 9, while Shanny sealed the issue with a 10.

Rai was severely affected by wind as he shot a poor seven to lose the first set by four points before levelling the match 2-2 by winning the second set by slender margin of one point.

A series of six 9s by Shanny meant that Rai snatched a 5-3 lead but failed to tie the fifth set.