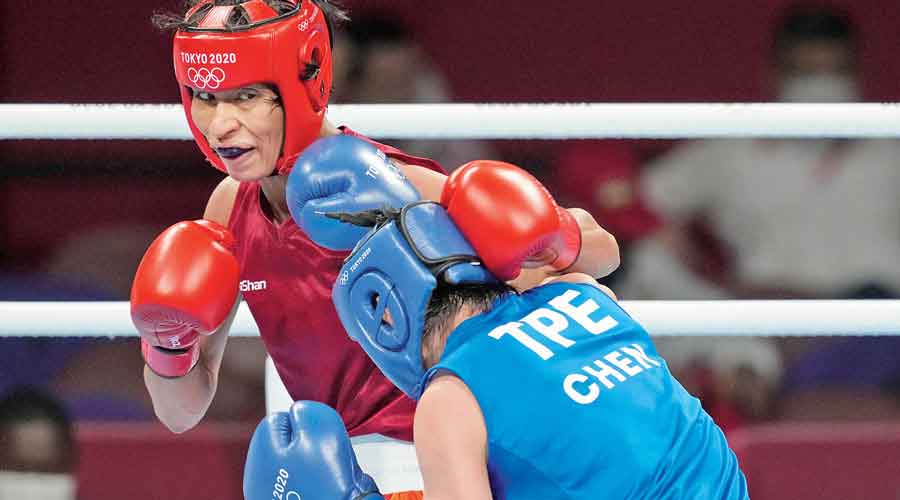 Overnight the mood changed. Thursday was a day of heartbreak for India as six-time world champion MC Mary Kom’s pursuit of a second boxing Olympic medal ended in the pre-quarter finals of the Tokyo Games. Friday heralded a new dawn.

It was, as if, the baton had passed.

The 23-year-old — the first woman athlete from Assam to have qualified for the Olympics and the second Assam boxer, after Shiva Thapa, to have done so — prevailed 4-1 to make the last-four where she will take on reigning world champion Busenaz Surmeneli of Turkey on August 4.

“I had lost four times to Chen before. So I had a big challenge which was to defeat her and prove a point to myself. It was never a question of proving anything to anyone else. It was all about my revenge, settling a long-pending score,” Lovlina said during a virtual media interaction after her win.

“No, I did not have a specific strategy from before because an opponent can often figure out a fixed strategy and play around it. I had decided to handle any situation there itself.

Lovlina’s journey began when she followed in the footsteps of her twin sisters, Licha and Lima, and took up Muay Thai. It was only when she met her first coach, Padum Boro, that her life took a definite turn.

Boro worked at Sports Authority of India (SAI)’s Shillong and Dimapur centres. During a SAI talent hunt in Lovlina’s home district of Golaghat, Boro noticed her and started honing her talent from 2012.

“The initial tests that I put her through showed that she had it in her. So I immediately selected her and sent her to SAI Guwahati,” Boro told The Telegraph. “My instinct told me she would definitely be an international one day.”

“She has become so much strong technically and mentally and if she plays the way she did today, a gold is there for her to take.”

The two time World Championship bronze medallist had a setback when she contracted Covid-19 last year.

“As it is, due to the pandemic we have not been having competitions. Then, after contracting Covid I missed an Italy trip, missed a competition, could spar far less. However, I tried to make up in other ways and trained accordingly. My coaches helped me,” said the Muhammad Ali fan who tries to copy the legendary boxer’s footwork and long punches.

From 2017, Lovlina had turned to meditation to calm herself and control her mind.

“I did feel the benefit. But for the last four months I haven’t been paying much attention to meditation.”

“Boxing is a sport which always has so much noise around it. So, even a cool head wasn’t helping.

“I decided that instead of depending on any external factor, jo bhi ho jaye, I have to win… agar meri haath bhi toot jaye, phir bhi mujhe jitna hain.”

Not for nothing is Lovlina dubbed a ‘fearless’ boxer.

Will she be under less pressure in the semi-finals, now that a medal is assured?

Pat came the reply: “Even in the quarters, I tried to play pressure-free as much as possible. Stress doesn’t help.”