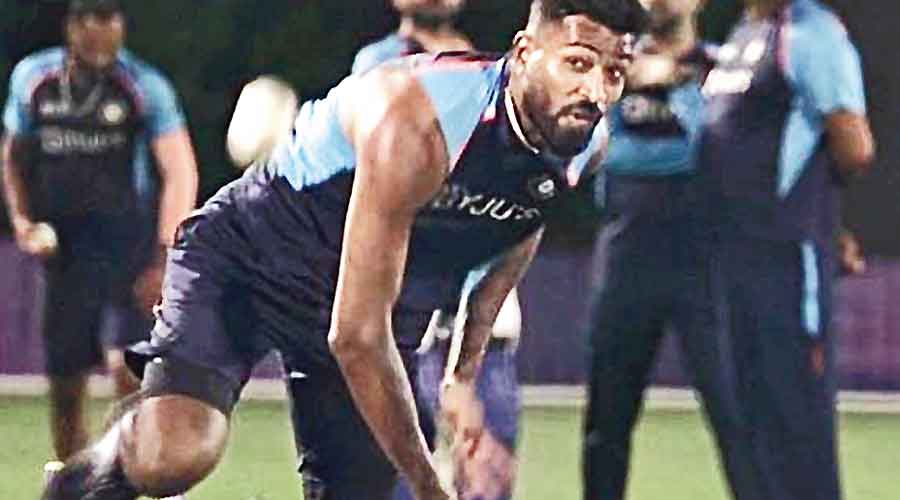 Hardik Pandya bowls during nets in Dubai on Wednesday under the watchful eyes of (from right) Ravi Shastri, Mahendra Singh Dhoni and Virat Kohli.
Twitter
Indranil Majumdar   |   Published 30.10.21, 12:59 AM

There’s never a dull moment when it comes to Hardik Pandya’s fitness saga. It has finally dawned on the India think-tank about the importance of a sixth bowler in the XI and how other teams have benefited from it in this format.

Almost 48 hours before their virtual knockout clash against New Zealand, there are second thoughts on whether to include Pandya in the XI in case he is still not fit enough to bowl at least a couple of overs. The all-rounder did send down a few deliveries during nets on Wednesday but that’s no guarantee that he would bowl in Sunday’s match.

“It is important how he recovers from that session... How his lower back copes with the stress and if he would be able to bowl at the same pace in the intense hot and humid conditions,” a source told The Telegraph from Dubai.

The Indians haven’t had a net session since Wednesday and are expected to train again on Saturday evening. If Pandya shows no signs of stiffness or strain and can continue to bowl, he will be considered for selection. Or else, Shardul Thakur will come into the fray.

Pandya didn’t bowl in the IPL because of a back niggle and was woefully out of touch with the bat too — 127 runs in 12 games at 14.11. But Virat Kohli’s belief in Pandya “the finisher” has remained undiminished, resulting in his inclusion as a specialist batter at No.7 against Pakistan.

Besides the thrashing versus Pakistan, Pandya’s struggle to make 11 off eight balls has opened a Pandora’s box. Kohli’s constant backing of Pandya and the stoic silence maintained by chief selector Chetan Sharma since announcing that the all-rounder was fit to perform his dual responsibilities, has left everyone confused.

More perplexing has been the role played by the BCCI which has a former captain at its helm. While the common notion has been that it would be improper to get involved in selection matters or internal affairs of the team, the lack of accountability has reached a stage where India’s existence in the T20 World Cup is at stake because of conservative thinking of a few.

“The selectors committed a mistake by keeping Hardik in the squad. He should have straightaway been replaced before the deadline expired. The selectors are informed about the players’ fitness status before meetings. You

can’t depend on someone to attain full fitness during the course of a World Cup... This is not a bilateral series. Hardik is just getting exposed everyday,” someone who has been closely associated with the side maintained.

The inability of top-order batters to bowl a few overs has also been haunting the side. “Earlier, there was more flexibility in the XI. You could even go into a match with four specialist bowlers since there was Viru (Virender Sehwag), Sachin (Tendulkar) or a Sourav Ganguly who could add depth to the bowling. There has been no initiative from the coaching staff all these years to make someone bowl a few overs,” the source said.

There’s also talk that Varun Chakravarthy could be replaced by Ravichandran Ashwin to bring in that element of experience in such a crucial encounter. The off-spinner is coming off a decent IPL wherein he picked up seven wickets in 13 matches at an economy of 7.41. It wouldn’t be surprising if India decide to go in with three spinners to utilise New Zealand’s weakness on slow and low surfaces.

Another change being contemplated is playing the in-form Ishan Kishan for Suryakumar Yadav. He could be useful at the top with his aggressive strokeplay and a left-right combination at the crease is expected to make the bowlers’ task a tad difficult.

The team management needs to make some tough calls. Will they stick to Pandya even if he doesn’t bowl? It’s unlikely Kohli will have his way this time.