Dube owes it to Rohit 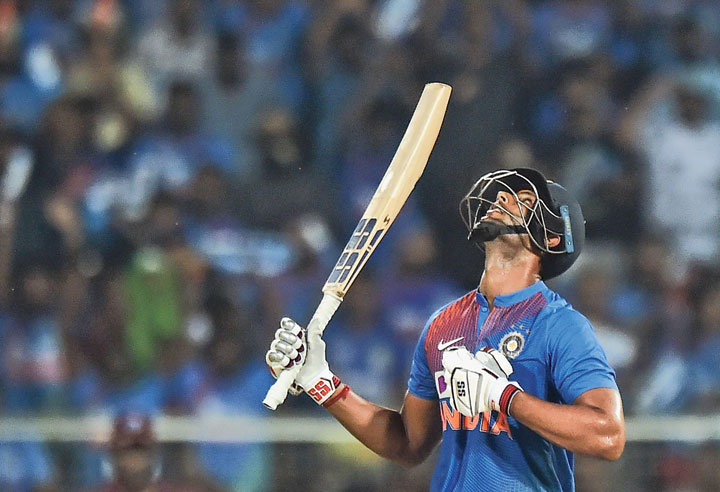 Shivam Dube made the most of his promotion up the batting order by smashing his first international half-century on Sunday. And it was senior pro Rohit Sharma who calmed the 26-year-old’s nerves helping him to deal with the pressure.

Dube was promoted up to the No.3 position by captain Virat Kohli during the second T20I against the West Indies. The left-handed batsman smashed 54 off 30 balls with four sixes, three of which came in one over from rival skipper Kieron Pollard. India, however, lost the match, failing to defend 170.

Initially, Dube was struggling with his timing. Having managed just 12 off 14 balls, Dube was feeling the pressure. But after wise words from Rohit, Dube found his rhythm to thrash the Windies bowling attack. He stayed back in his crease and unleashed some big shots, especially through the leg side.

A pulled six over square leg off the bowling Jason Holder spoke much of Dube’s backfoot game also.

“I think I was given the opportunity to bat at No.3 and I think it was a big deal for me. The pressure was there at the starting obviously — after all, it’s an international match.

“But Rohit bhai helped me and said ‘stay calm and back your strengths’. I think that was the motivation I needed from a senior player. Then I got one six and did really well after that,” Dube said.

Dube was particularly merciless on Pollard, hitting him for three maximums in the ninth over of the Indian innings. Of them, a pull over the midwicket boundary looked exquisite and even captain Kohli, who was at the non-striker’s end of the crease, punched his fist in the air in excitement.

Despite his team’s loss, Dube has gained much confidence from his innings. In fact, the Mumbai all-rounder has claimed that he can hit sixes on any ground.

After clearing the boundaries in Thiruvananthapuram, Dube said: “I think this ground is big but I have the capability of clearing any ground. You might have seen that in this game.”

Dube was seen wielding his bat with tremendous intensity, packing quite a punch in his shots. He said “power” will remain his strength.

“I think that’s my strength and I always go like that only,” he said.

Dube’s Sunday innings will surely do a world of good to his chances on the road to the T20 World Cup in Australia next year.

However, he will have to be consistent with his performances. That is because once Hardik Pandya comes back to the Indian side, it will be very difficult for Dube to hold on to his place.