It's been 13 years since the 37-year-old first appeared for India in a SAFF Championship match. Since then, he has been part of the Blue Tigers squad in four editions 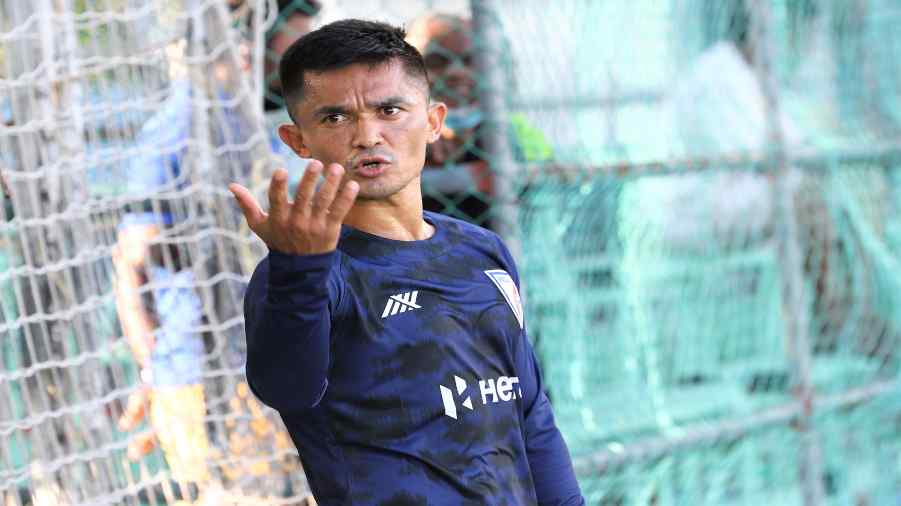 Indian football talisman Sunil Chhetri says he shared the best rapport with former captain Bhaichung Bhutia and striker Jeje Lalpekhlua on the field, thanks to their playing "combination" and "understanding".

The 37-year-old Chhetri is set to appear in his fifth SAFF Championship and before its kick off, he took a walk down the memory lane and picked his favourites from the tournament during a chat with the AIFF.

Asked with whom he has shared the best relationship on and off the field, Chhetri said, "As I have played with so many players, it has kept changing. But I am quite fortunate with whom I have enjoyed my relationship on and off the field. If I stick purely on the pitch, I will pick Bhaichung da (Bhutia) and Jeje (Lalpekhlua), and it has more to do with my combination and understanding with them.

"But if it's a mix, and the proximity which we share then it has to be Eugeneson Lyngdoh. Despite him playing for a very short time, I am extremely fond of him, and we are very close. But then I am close to everyone."

It's been 13 years since Chhetri first appeared for India in a SAFF Championship match. Since then, he has been part of the Blue Tigers squad in four editions.

When asked which has been his favourite SAFF Championship so far, he picked the 2015 edition.

"I will pick the one which we won in Kerala in the 2015-16 edition. The rivalry that we had with Afghanistan in the final, and the build-up to it was simply majestic.

"It is also because we had a lot of youngsters in the squad, and won it with just 19 players after Robin Singh got injured in the first match itself. Over 40,000 people turned up to cheer for us in the final. That will always stay with me."

Chhetri was also asked about his favourite goal from all the editions he has been part of.

"Jeje's goal in the final against Afghanistan in 2015-16 in Thiruvananthapuram will always be my favourite. It was an extremely tough match, and we were 0-1 down despite having some good chances. The goal was extremely significant, and the manner the superstar flicked it in was sublime.

"Most importantly, it came at the right moment. If we hadn't scored then, maybe we would have panicked and the result could have been different. We eventually went on to win 2-1."

India will begin their campaign on October 4 in the upcoming edition starting on Friday.

Asked about the toughest matches he has played so far in the tournament, he said, "There have been quite a few. But if you ask me to pick a specific one, then it has to be the one which we played against Nepal in Kathmandu in the 2013 edition.

"It was a group stage match, and we lost 1-2 in front of a full house. It was noisy, and it has been my toughest match in the Championship so far."

He also said Bhutia has been the most "lethal" India player he has played alongside in the tournament.

"That's a really difficult one to answer as there have been many. But I will go for Bhaichung da, and I don't need to explain it. His name itself is self-explanatory."