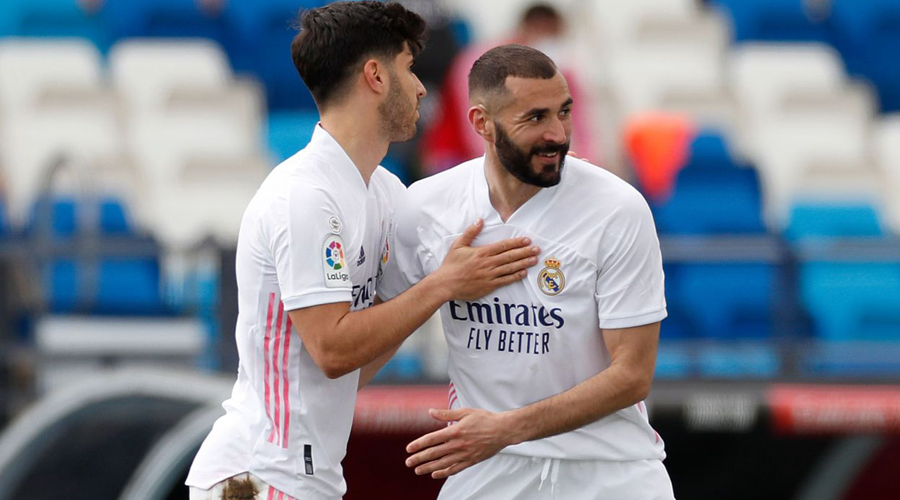 Real Madrid forwards Marco Asensio and Karim Benzema struck to give their side a 2-0 win at home versus Eibar at the La Liga on Saturday, keeping up the pressure on leaders Atletico Madrid ahead of Tuesday’s Champions League clash with Liverpool.

Asensio finally gave Madrid the lead late in the 41st minute after his side had two goals ruled out for offside, latching on to a Casemiro through ball and curling his effort into the bottom corner despite losing his footing as he took the shot.

After controlling the first half, Madrid struggled for a long spell in the second as torrential rain poured down on the Alfredo di Stefano Stadium and goalkeeper Thibaut Courtois almost committed a howler when he failed to control a back-pass, but managed to kick the ball away just before it crossed the line.

Madrid then had a goal ruled out for offside for the third time, but eventually got the all-important second when Benzema headed home a cross from Vinicius Jr in the 73rd minute. Their third straight victory lifted Zinedine Zidane’s side to second in the standings with 63 points.

Leaders Atletico, who visit Sevilla on Sunday, are on 66.

With an eye on the quarter final first leg at home to Liverpool, Zidane shuffled his squad to rest defender Raphael Varane while starting without Toni Kroos and Vinicius.