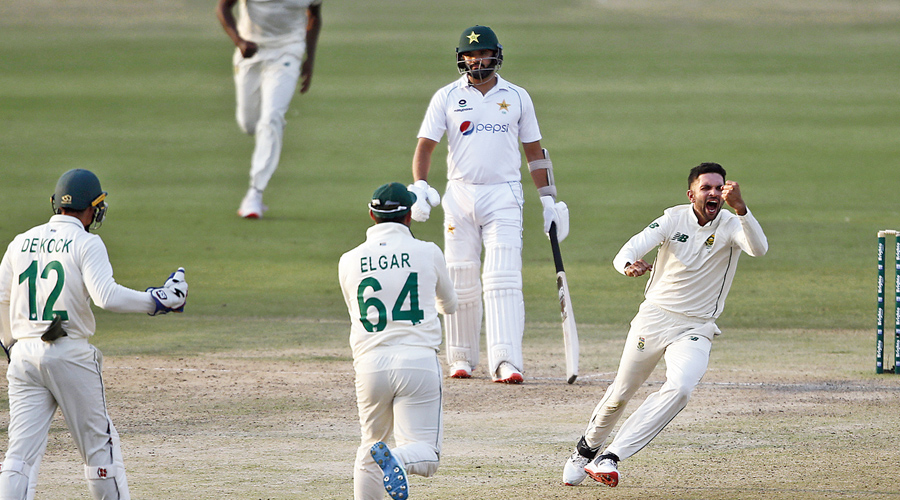 Keshav Maharaj of South Africa (right) celebrates with teammates after dismissing Pakistan’s Babar Azam on the first day of the first Test in Karachi on Tuesday.
PTI
Reuters   |   Karachi   |   Published 27.01.21, 01:21 AM

Pakistan spinners Yasir Shah and Nauman Ali took five wickets between them to restrict South Africa to 220 all out, but the home side faltered in reply to close on 33/4 on Day I of a fast-moving first Test in Karachi on Tuesday.

Azhar Ali and Fawad Alam were both batting on 5 and will resume on the second morning on a wicket already producing both turn and variable bounce, suggesting the visitors’ modest first innings score could be par.

In a major blow for the home side, captain Babar Azam (7) was trapped leg before wicket by spinner Keshav Maharaj just before the close of play.

Anrich Nortje then grabbed the wicket of Shaheen Shah Afridi (0) with a full delivery, only the fourth ball the hapless nightwatchman had faced.

South Africa were in many ways the architects of their own downfall with the bat, however, having won the toss in their first Test in Pakistan since 2007.

They had two run outs in their top six, while captain Quinton de Kock (15) gave his wicket away with a wild swing across the line off left-arm spinner Nauman (2/38), who is playing in his first Test at the age of 34.

Dean Elgar (58) was the top scorer and looked in control until he drove at a wide delivery from Nauman and was caught at slip. Rassie van der Dussen and Temba Bavuma were both run out on 17.