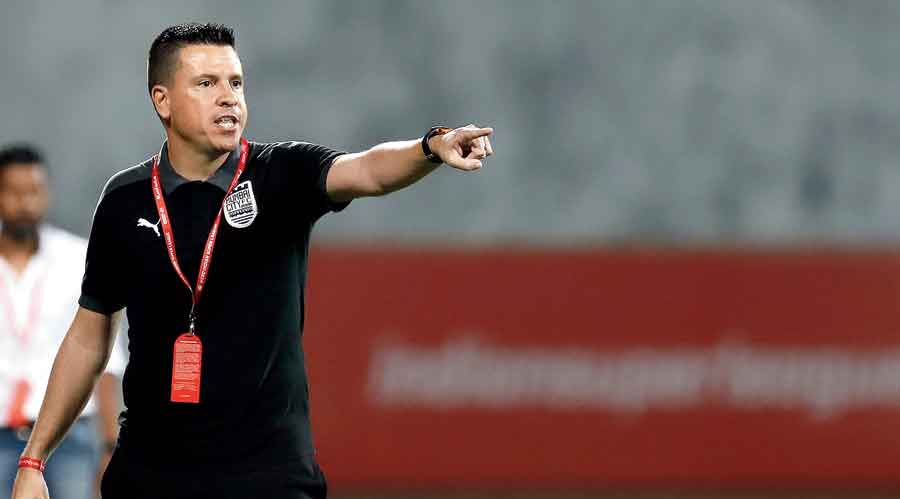 Manchester City and Mumbai City, the two clubs owned by the Abu Dhabi-based City Football Group (CFG), are on a roll. While Pep Guardiola’s men are running away with the English Premier League title, Mumbai City on Sunday earned a berth in the AFC Champions League (ACL) by winning the ISL VII league winners shield. There is already talk about a CFG double — Man City winning the EPL and Mumbai City becoming ISL champions.

“I think Man City’s job is easier than ours. The form they are in, they look invincible at this point in time. We have crossed the first target (qualifying for ACL) and the next will be very difficult. In play-offs anything can happen,” Mumbai City coach Sergio Lobera said during an interaction with The Telegraph.

Lobera has done wonders with the two teams he has managed in India so far. He guided FC Goa to the ACL last year before parting ways and now with Mumbai City he has been hugely successful. He says his job is to improve the Indian footballers.

“I am here to improve the standard of the game in India. To give Indian footballers more chance, give them the confidence that they can compete at the highest level,” he said.

National coach Igor Stimac has included five footballers from Mumbai City — Amrinder Singh, Mandar Rao Dessai, Rowlin Borges, Raynier Fernandes and Bipin Singh — in the 35-man list of probables for the back-to-back friendlies against Oman and UAE to be played in Dubai on March 25 and 29, respectively. Of the five players, Bipin, this ISL’s only hat-trick man till now, has got his maiden call-up.

According to 44-year-old Lobera, this proves that the team is on the right track. “It is a proud moment for all of us. Five players in the national team prove we are doing something good. For a coach the biggest satisfaction comes when he sees players from his team representing the national team consistently.”

Lack of a good striker after Sunil Chhetri is a worry for the Indian national team. Lobera thinks coaches should now start giving more starts to Indian players and stop relying on foreigners.

“That’s the only way to improve the standard. We have to show faith in Indian players upfront. In some positions, we use foreigners and that does not allow Indian footballers to showcase their talent. For example, Manvir Singh is playing as a winger for ATK Mohun Bagan because they have Roy Krishna as the main striker. Or Chinglensana Singh has become a big name now after he started playing regularly for Hyderabad FC. I am confident the tables will turn soon and you will see Indian footballers in key positions.”

The Spaniard, who worked briefly as Tito Vilanova’s assistant coach in FC Barcelona in 2012, feels ISL VII has proved Indian coaches are now ready for the leap. “If you see Khalid Jamil’s performance as NorthEast United FC, it’s fantastic. They played so well under him and have reached the play-offs. It shows Indian coaches are now all set to make that leap.”

Mumbai City saw a slump in form during the latter part of the league stage but Lobera refuses to give much importance to that.

“In every league every team will have good as well as bad moments. Barring of course the present Manchester City team. So when there was a blip in form, we did not panic. We stayed true to ourselves and rallied around each other knowing well that good moments will come anytime.”