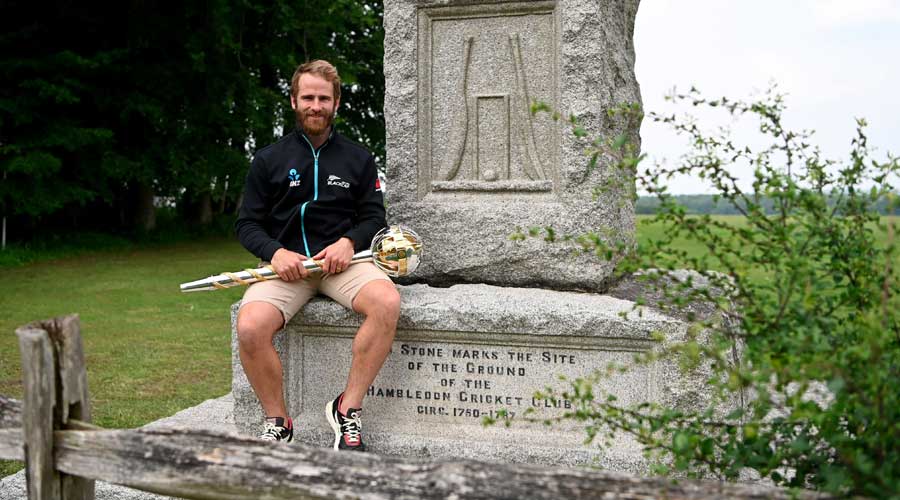 Kane Williamson with the World Test Championship mace at Hambledon Cricket Club, one of the oldest cricket clubs in the world which has been in existence since the 1760s.
Twitter / @BLACKCAPS
Sayak Banerjee   |   Calcutta   |   Published 25.06.21, 04:06 AM

Going by numbers, it appears Kane Williamson has outsmarted Virat Kohli and that resulted in New Zealand winning the inaugural World Test Championship in Southampton on Wednesday.

Williamson got almost everything correct in the rain-affected final right from winning the toss. He made the right bowling changes and field settings, and remained unbeaten on 52 after the Black Caps found themselves in a tricky position while chasing a 139-run victory target. He had also made a patient 49 (294 minutes) to help New Zealand take an important first innings lead.

On the other hand, for Kohli, barring the 44 runs he got in India’s first essay, nothing quite went his way.

“Kane was certainly one reason for New Zealand’s success. If he’s currently not the best, then he must rank among the top two or three (batsmen) for his consistency,” former Australia head coach John Buchanan told The Telegraph on Thursday.

“But India did not have the right preparation for the final. And hindsight showed that their attack, which featured two spinners, was not the right make-up for conditions at the Ageas Bowl,” Buchanan added.

Even in the 2019 World Cup semi-final in challenging conditions in Manchester, Williamson scored 67 while Kohli managed just one as New Zealand won by 18 runs.

Former India opener and current Bengal coach Arun Lal, however, feels it’s harsh to criticise Kohli when almost all the other Indian batsmen have struggled at the Ageas Bowl.

“Look, Virat made a mistake, and that happens. There’s so much pressure on him, while the ball was also moving a lot in such conditions. Prior to that, he was covering for the ball that came in as he was lbw last time.

“Now, if you are unlucky, you will nick it. Besides, that was a very good spell by (Kyle) Jamieson (in the second innings),” Lal explained.

“We can’t really say it was a bad shot. Your foot is two feet away from the ball and you still hit it for a boundary, everyone then says it’s a classy shot. But you miss a similar kind of ball and it takes the edge, people will then say, ‘No footwork, playing away from the body... Horrible shot’.

“That’s not the way you should deal with it. Besides, all our batsmen looked vulnerable against the Dukes ball. Why blame Virat alone?” Lal asked.

Speaking of Williamson, Lal said he’s yet to prove himself on turning tracks on the subcontinent. “Yes, Kane is very tough to dislodge, plays very late with soft hands, got a lot of confidence and calmness, and remains unflustered. But let’s also judge him on a turning track in India and let’s see what he does there,” Lal stated.