I have given up so much to get to this point and it makes everything worth it, says the 28-year-old 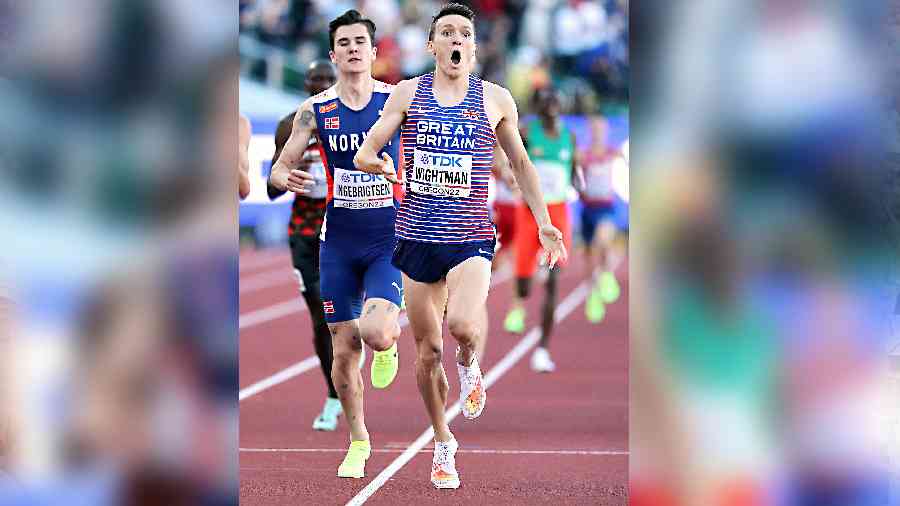 Britain’s Jake Wightman celebrates as he crosses the line to win the men’s 1500m final during the World Athletics Championships in Eugene on Tuesday.
Reuters
Reuters   |   Eugene   |   Published 21.07.22, 03:24 AM

Briton Jake Wightman took a superb World Championship 1,500m gold as he overpowered Olympic champion and hot favourite Jakob Ingebrigtsen in the final lap on Tuesday, with his proud father Geoff calling him home as the stadium announcer.

On an emotional night, 28-year-old Wightman celebrated the first World Championship gold in the event for former middle-distance powerhouse Britain since Steve Cram — also in the stadium commentating for the BBC — in the first event in 1983. He then received his gold medal from double Olympic 1,500m champion and World Athletics president Sebastian Coe.

Wightman’s winning time of 3 minutes, 29.23 was the fastest in the world this year and underlined his pedigree. Ingebrigtsen took silver, with Spain’s Mohamed Katir finishing strongly for bronze just ahead of compatriot Mario Garcia.

“Today the stars just aligned,” said Wightman. Kenyan duo Timothy Cheruiyot and Abel Kipsang set the early pace but when Ingebrigtsen eased to the front with two laps to go, there looked to be only one winner.

Wightman, however, is a notable tactical racer and was not about to sit back and watch the show. He stayed tight on Ingebrigtsen’s shoulder and then did what almost nobody does — went alongside the Norwegian on the back straight of the final lap and then got his shoulder in front with 200m to go.

“I just felt so good that I knew there was a shot at it. All I wanted to do was challenge him and whether that comes away with a medal, or just make some impact on the race and you know, take the risk to try and win it,” he told reporters.

Brazilian Alison dos Santos denied record-holder Karsten Warholm a third successive World Championship title, winning the 400m hurdles in a championship record. While the hype heading into the final had largely been focused on a showdown between the Norwegian Olympic champion Warholm and his American rival Rai Benjamin, the Tokyo bronze medallist had the victory locked up down the final straight, with Benjamin taking silver.

Warholm had twice broken the world record in 2021 but walked into Eugene with a question mark over his head, after suffering a hamstring tear in June, having not completed a race in 10 months, and finished seventh.

Young gun Kristjan Ceh of Slovenia dethroned Sweden’s Daniel Stahl in the discus final, giving the performance of his life to win gold in his first major championship.

Olympic champion and 2019 winner Stahl very briefly held the lead with a 66.59m opener but was quickly overtaken by the Lithuanian duo Mykolas Alekna and Andrius Gudzius, improving to 67.10 on his fifth try but never getting himself back into medal contention.

The 23-year-old Ceh sent roars through Hayward Field as he rocketed a 71.13 metre third attempt across the lawn, clinching the top of podium in a championship record.

“It was a fast circle here but everybody has the same conditions and you just need to trust yourself,” he said. The 206-centimetre (6.76- foot) tall titan waved his hands to hype up the crowd after his final toss and later leaned down so that an official could place the gold around his neck. “I knew that I have the ability for the big throw,” he told reporters.

“But this was my first major championships and I had various feelings from the beginning.” Ceh said he would turn his attention to the European Championships next month, eager to keep up the momentum. “I want to be the best,” he said.

Alekna and Gudzius finished with silver and bronze, jogging along the track with their nation’s flag waving behind them, after producing throws of 69.27 and 67.55, respectively, in the fourth round.

Australian Eleanor Patterson picked the perfect time to produce her lifetime best leap as she equalled the Oceania record of 2.02 metres to win a surprise high jump gold on Tuesday.

Patterson failed twice at 1.98 metres, once at her previous best of 2.00 but cleared 2.02 at the first attempt, lifting her from fourth place to first. As her rivals then faltered, it proved enough to earn her gold on countback ahead of Ukrainian favourite Yaroslava Mahuchikh, who needed two tries to get over the same height before both athletes failed to clear 2.04 metres.

Italy’s Elena Vallortigara was error-free up to 2.00 metres and though she could not go any further she took bronze on countback from Ukraine’s Iryna Gerashchenko. “It’s crazy, 2.02, I don’t know what happened,” Patterson said.

“So many girls went two metres it was a phenomenal performance from everyone. I’m so thrilled to clear 2.02. I’m so proud of myself and my team.” Olympic and triple world champion Mariya Lasitskene was absent because of the ban on Russian athletes in Eugene.

Two Commonwealth Games-bound Indian athletes have been ruled out of the Birmingham Games starting next week after testing positive for banned drugs.

The 24-year-old Dhanalakshmi returned positive for a banned steroid in a dope test conducted abroad by the Athletics Integrity Unit (AIU) of World Athletics. She was named in the CWG team for the 100m and the 4x100m relay team along with Dutee Chand, Hima Das and Srabani Nanda. The Games  are scheduled from July 28 to August 8.

The 24-year-old Aishwarya’s dope sample, taken by the National Anti Doping Agency (Nada) officials during the National Inter-State Athletics Championships in Chennai last month, has also returned a positive result. She was named for the triple jump and long jump events at the CWG.