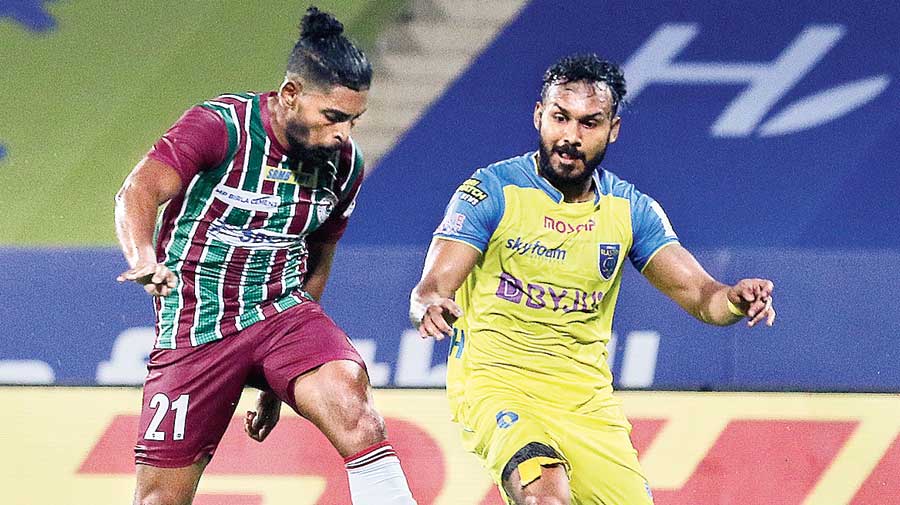 Indian Super League debutants ATK Mohun Bagan, in the first match of the seventh edition, recorded a 1-0 victory over Kerala Blasters at the GMC Stadium in Bambolim on Friday.

Substitute Manvir Singh, who replaced Pranoy Haldar in the second half, made a run down the left flank and clipped the ball into the box. Two Kerala Blasters defenders who were in the area could have cleared it but their dilly-dallying allowed the Fijian international to pounce on it and punish the hosts with a calm and composed left-footed finish. The moment the ball hit the back of the net, Krishna ran towards the fan-less gallery, had his trademark celebration — showing the heart sign — and then broke into a jig with teammate Prabir Das. At the bench, coach Antonio Lopez Habas let out a cry in joy. It was more of a relief since Blasters have always been a bogey team for ATK.

The victory though came at a price as left wingback Michael Soosairaj had to be carried off after suffering a knee injury. That happened in the 15th minute following a clumsy challenge by Prasanth Karuthadathkuni of Blasters. A team source said Soosairaj would have an MRI on Saturday and a clearer picture would emerge only after that.

All eyes were on the 131-year-old legacy club Mohun Bagan as they were making their ISL debut after joining hands with three-time defending champions ATK. The match also had an interesting sub-plot as Kibu Vicuna, who had guided Mohun Bagan to their fifth I-League title last season, sat in the opposite dugout in the Blasters jersey.

Antonio named a predictable 3-5-2 line-up with the star signing Sandesh Jhingan helming the defence in his first outing after a lengthy injury layoff of more than 12 months. ATK Mohun Bagan had a dominant first half and made some early inroads with Krishna missing an early chance, even as Blasters enjoyed more ball possession.

Blasters looked more threatening and came out with an attacking intent in the second-half. In the end though it was Krishna who made the difference.