Kishan punches his way back to form, Mumbai grab lifeline 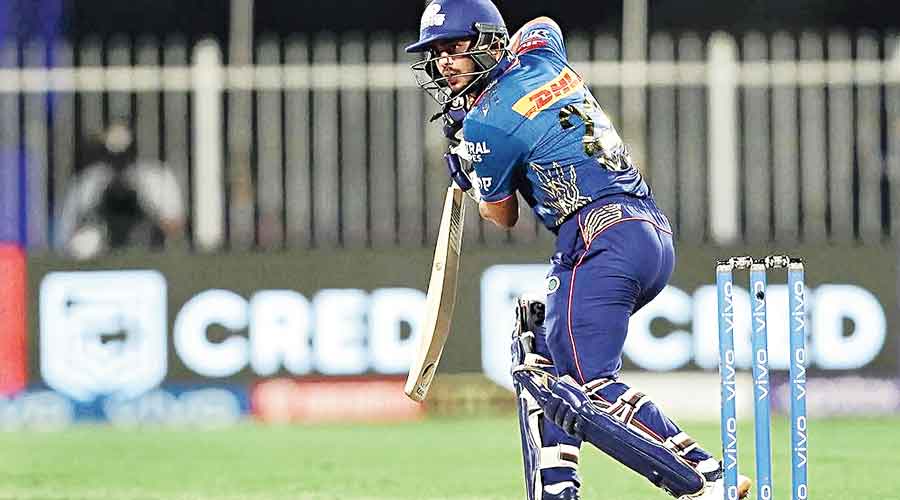 Ishan Kishan on way to his unbeaten half century against Rajasthan Royals on Tuesday.
Picture courtesy IPL
Indranil Majumdar   |   Calcutta   |   Published 06.10.21, 12:40 AM

A week ago Ishan Kishan had almost been in tears when Virat Kohli offered some consolation. He had been struggling to find form having accumulated a mere 107 runs from eight matches in this IPL.

The wicketkeeper-batsman returned to the side after two matches and immediately proved that a break can often work wonders. Opening the innings with Rohit Sharma against Rajasthan Royals, Kishan remained unbeaten on 50 off 25 balls to reach the 91-run target in 8.2 overs. More than the win, his innings went a long way in improving Mumbai Indians’ net run-rate, which could play a big role in deciding the last remainingplay-offs berth.

With Kishan pulling and cutting with disdain, there was never any doubt about Mumbai Indians’ victory. The Jharkhand cricketer wrapped up the eight-wicket win with a six off Mustafizur Rahman.

Man of the Match Nathan Coulter-Nile of Mumbai Indians after dismissing Rajasthan Royals’ Yashasvi Jaiswal in Sharjah on Tuesday.
PTI

Rajasthan Royals will now have to look forward with optimism to their final league match against Kolkata Knight Riders on Thursday.

The race to be the fourth team in the play-offs is now wide open. Tuesday’s victory means that Mumbai Indians’ chances of qualification have improved. They have 12 points now with a game remaining. They will make the knockouts for sure if they beat Sunrisers in their last game and if Rajasthan Royals beat Kolkata Knight Riders. 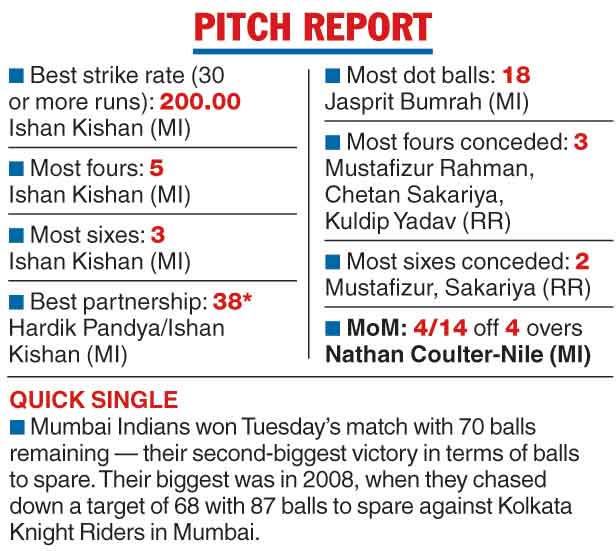 However, if the Knight Riders beat the Royals, Mumbai Indians will almost certainly be knocked out because of their poor net run-rate.

If Mumbai Indians lose to Sunrisers and if the Royals beat Knight Riders, then three teams will be tied on 12. Punjab Kings could join them too if they beat Chennai Super Kings. In that case, the Knight Riders’ superior net run-rate could see them through. However, Mumbai Indians will be playing their last match after Knight Riders and that makes their task a bit easier. 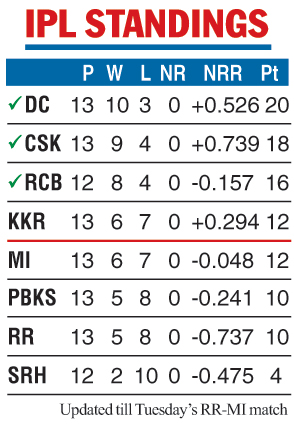 It was a good toss to win for Mumbai. They didn’t allow the batsmen width on the low and slow Sharjah wicket where stroke making was difficult.

Most of the Royals batsmen fell going for over-ambitious shots, and as a result, they crawled to 50 for five after 10 overs. The Mumbai Indians’ ploy to bowl round the wicket against the lefthanders also paid off.

The likes of Nathan Coulter-Nile (4/14) and Jimmy Neesham (3/12) bowled just short of a good length to cramp the batters for room. At one point the pair had combined figures of 4-0-11-4, which proves their dominance.

This was the Royals’ first match in Sharjah this season and it showed in their approach.

Mumbai Indians had Chennai Super Kings in almost a similar situation, reducing them to 48 for four at the halfway stage, before Ruturaj Gaikwad plundered the attack to shreds.

The Royals needed someone to come to their rescue but none proved equal to the task.