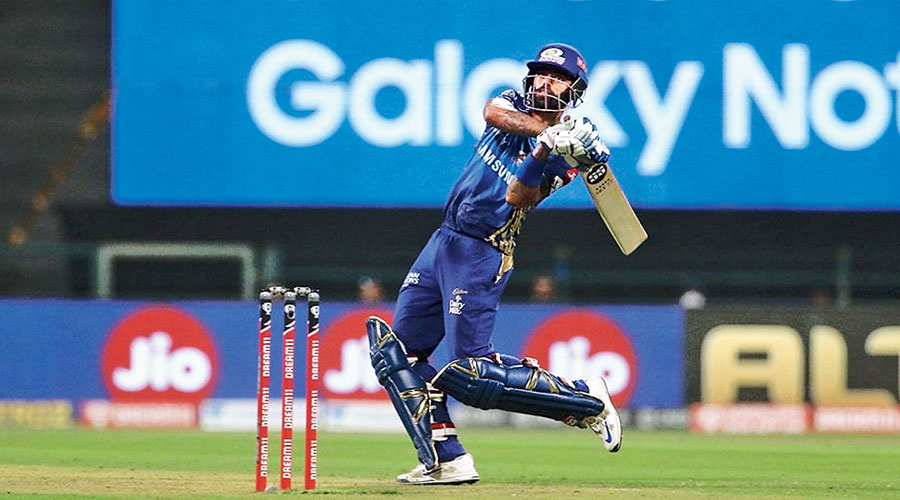 Mumbai Indians are playing like champions. They won the toss and rightly opted to bat first, posted a formidable total, picked up early wickets and also weathered a Jos Buttler storm to eventually register a comfortable 57-run win over Rajasthan Royals at the Sheikh Zayed Stadium on Tuesday.

Rohit Sharma’s boys are back at the top of the standings with 8 points, having a superior net run rate than Delhi Capitals who also have the same number of points.

To speak of the Royals, who were bundled out for 136 in 18.1 overs chasing a 194-run target, they are languishing at second from bottom after three straight losses. They seem to have lost the plot ever since shifting from Sharjah, where they played their first two matches and won them too.

This was Suryakumar’s highest IPL score, but his innings stood out also because of the defiance he showed in the face of some hostile fast bowling from Jofra Archer. Shrugging off a blow on the head off a searing delivery from Archer, he nonchalantly came up with an outrageous scoop off the England pacer’s very next ball that went all the way behind the wicketkeeper’s back for a six.

“I spoke to him today before the match. He was batting really well all these games. It was all about shotmaking — today his shotmaking was perfect,” captain Rohit said in praise of Suryakumar at the end of the match.

The Royals’ chase got off to a poor start as they were down to 12/3 in the third over, which included the wickets of Steve Smith and Sanju Samson. It was always going to be a steep climb for there on, but Buttler still tried his best. The Englishman got back to form with a fluent 70 off 44 balls, but without able company from the other end, it proved to be a losing battle.